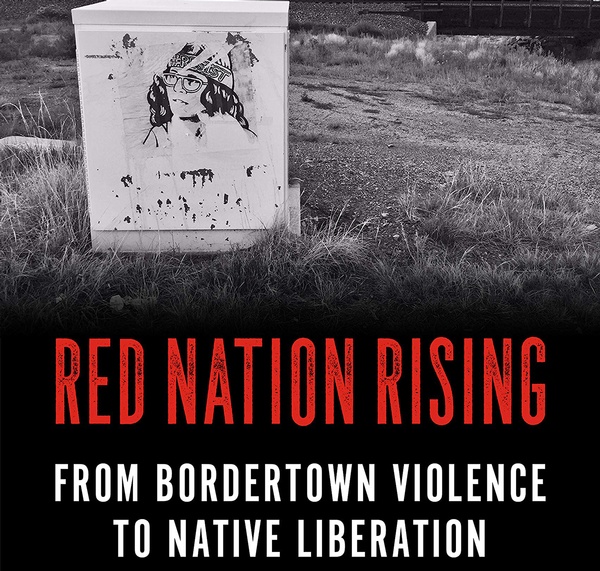 Days after the Fourth of July, there was a report of an Indigenous woman who was violently assaulted by an unknown group of individuals in Farmington, N.M. The woman recalled hearing statements about white supremacy, alongside celebrations of Independence Day, from the gang that attacked her and left her unconscious in the street.

It remains unclear who the individuals were, or if they will be held accountable for this brutality. And yet, these brutal actions are not uncommon when navigating through reservation bordertowns as an Indigenous person.

The frequency of such violence against the Indigenous community, along with a consistently numb reaction from mainstream society, compelled a group of Indigenous writers and activists to release the book, Red Nation Rising: From Bordertown Violence to Native Liberation. Published in June 2021, it was written and compiled by a collective known as the Bordertown Violence Working Group, made up of Native activists and scholars such as Nick Estes and Jennifer Nez Denetdale, among others. The essays in the book are a refreshingly radical critique of colonialism and the various ways settler governments reinforce power over stolen Native land. With a fiercely unapologetic Indigenous voice, the authors focus on those locations Native communities know all too well: bordertowns.

The authors define bordertowns as “white-dominated settlements that ring Indian reservations and give spatial form to the violence and exploitation that defines everyday Native life, past and present.” Going further, the authors argue that given the genocidal nature of colonialism, “every town is a bordertown, because every town serves as a border that settlers must defend” against the threat of Native bodies going “off the reservation.”

All throughout the book, the authors copiously document historical and contemporary instances of settler violence against Native peoples, whether committed by white vigilantes or militarized police. “From Saskatoon to Santa Fe,” the authors note, “bordertowns are always bloody killing fields.” As such, in this raw reckoning with the settler state, borders and bordertowns begin to look like chalk outlines of a colonial crime scene.

From the visceral violence committed by white mobs to those enforced subtly by way of bureaucratic legislation – such as the use of residential schools and policies meant to erase Indigenous life and sovereignty –the authors refer to “anti-Indian common sense.” The ideology encompasses everything from racist depictions of Natives in popular culture (like mascots) to more spectacular forms of genocide (like massacres), which pervades settler communities throughout North America.

Among the many infamous bordertowns, the New Mexico towns of Farmington and Gallup are righteously held accountable in the book, with many tragic anecdotes. Concurrently, here in Durango, we have yet to reconcile with our on-going complicity in bordertown violence and colonialism. Along with a racist statue that still resides outside Toh-Atin Art Gallery in downtown, there is also Fort Lewis College’s dark history, starting as a military fort to surveil and suppress the threat of nearby Natives, then transforming into a residential school for Native children who were being removed from their homes and families.

“The American sense of reality,” prophetic Black writer James Baldwin once said, “is dictated by what Americans are trying to avoid. And if you’re trying to avoid reality, how can you face it?” In a similar tone of poignant, fiery passion, Red Nation Rising is an urgent call to action and awareness from Indigenous voices and allies.

On the outside, the book is slim, yet each essay is a raised red fist, delivering one blow after another against the malignant forces of bordertown violence. Personally speaking, this is a book I have been waiting for nearly my entire life – the vibrant, radical message imbued in the text rekindles within me what Fredrick Douglass referred to as “embers of freedom.”

For the Native children whose lives were lost in residential schools; for the missing and murdered Native women and Two-Spirit relatives; for the unsheltered and vulnerable Indigenous members who often encounter the brute force of settler violence, the book serves as a reminder that their lives matter, and those who perished must be honored by Indigenous-led liberation struggles.