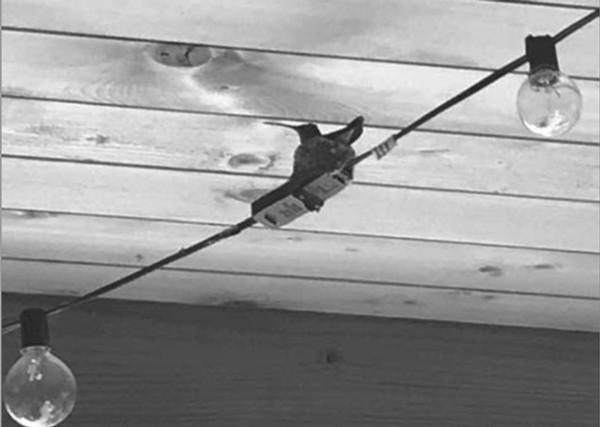 Like many Durangoans, we spent part of our summer confined inside our house. But this was not due to smoke, heat, mudslides or any other natural debacle. Rather, we were held captive by a tiny tyrant, weighing no more than a nickel and measuring about the size of your average Q-Tip.

Yes, our summer was ruled by a hummingbird.

I know it’s silly to think something the size of a flying chicken drummie could command such respect and fear from the top of the food chain. But despite their sweet, nectar-sipping reputation, it’s a little known fact that hummingbirds suffer from classic little-bird syndrome. In fact, piss one off, and you could find yourself re-enacting your own Tippi Hedron hell.

We learned this the hard way, after coming home from a night out on the town (and speaking of Tippi, yes we were.) We opened the back door to let the dog out when we were ambushed by a tiny feathered torpedo. It flew in the door and before we knew it, it was dive-bombing us like a blind kamikaze, running into walls, ceilings, furniture and other trappings of indoor human habitat.

Fortunately, we avoided a Willy Wonka like scenario when I made a heroic lunge to turn off the ceiling fan right as the little guy was headed for the churning blades. (Yes, we assumed it was a guy bird because a girl bird would be smart enough not to fly into a house full of screaming, panicked humans, even if she was just a birdbrain.)

Nevertheless, with the threat of birdicide de-escalated, we were still left with the unusual situation of having a bird loose in the house, late at night.

Efforts to lure Buzzy the “dummingbird” out with towels, flailing arms, watermelon and other stupid human tricks worked to no avail. By midnight, I resigned myself to the hope that he would find his own way out and went to bed. But others, including a house guest (who now thinks Durango is run amok with attack hummingbirds), kept up the good fight, and somewhere around 3 a.m., Buzzy found his way to freedom.

But that was not the last of him. For the next several days, he would accost us from the other side of the kitchen windows, stabbing at the glass, playing tough guy with wings spread and making my coveted morning coffee sadly uncomfortable. Outside was even worse – and I have no doubt, had he been bigger, he would’ve pecked our eyes out with glee.

We began to wonder if maybe he was some kind of rare, aggressive Africanized hummer, and that’s when someone spotted the nest. The size of a sake glass, it was precariously perched atop a string of outdoor lights under our back porch’s overhang. It was built on the small area where one string connects into the other, roughly the size of a pack of Juicy Fruit (giving whole new meaning to “bird on a wire,” I might add.)

And that’s when we realized: a) Buzzy was a Buzzina; and b) she wasn’t dumb at all, just protecting her nest. (OK, maybe it wasn’t the smartest choice of venues, especially given two perfectly good, mature trees nearby. Then again, my house is red, so I sort of brought it upon myself.)

Although I like to fancy myself a birder – I can spot an LBB (little brown bird) a mile away – the hummer threw me for a loop. So, as any stymied advanced primate with opposable thumbs would do, I went to Google.

“Like a crown jewel, the nest of a hummingbird is one of the great wonders in all of nature,” read one birder website. “They are so tiny, yet so perfect. Few of us have ever seen a hummingbird nest. This is because they are nearly impossible to find.”

Suddenly, I was filled with an overwhelming sense of pride and ecological duty. She had picked our back stoop as the safe haven to lay her two tiny jellybean-sized eggs. By golly if I wasn’t going to seize my chance at Audubon greatness.

Of course, this meant six more weeks of tip-toeing around the back door and limiting our time in the yard so as not to scare her off from her sitting duties. (Another interesting factiod: female hummingbirds need to spend 55 minutes of every hour on their nest, leading me to wonder what they think about sitting there all day.)

As we got down to the waning days of the three-week incubation, we were on pins and needles. After a weekend away, we returned home to an empty nest and were filled with dread. Convinced we had failed as bird godparents, we concocted various scenarios. Maybe a bigger bird got to them. Or we disturbed her so much that the eggs never hatched and she abandoned the nest.

And that’s when Buzzina swooped in for a momentous return, and two tiny, hungry beaks jutted into the air. The baby birds were alive!

(Right about now you are likely thinking I need to get a life – which is probably true. But you try being a prisoner in your own home and see what you do for fun.)

Despite the successful hatching, we were not out of the woods yet. During the second week of the three-week rearing, there was an unfortunate event involving an errant ladder and the light string. We gasped in horror as the commotion sent a shockwave up the wire, to the overloaded nest, which as a result precariously listed to one side.

My heart sank, and the next few days were filled with anxiety that even the smallest breeze would dump the nest onto the concrete below. We had come too far in our sleepless nights to let this happen, so I made an executive decision. Waiting until Buzzina left in search of food, we gingerly climbed a step stool and tried to right the wire.

When those efforts failed, we dug deep into our Durango ingenuity – and the raft kit – and emerged with a shorty cam strap. We slung it over the light cord, which provided just enough counterbalance to right the nest – all before Buzzina was the wiser.

(Don’t worry, I consulted Google on this one, too. Turns out that stuff about birds abandoning their nest or eating their young if you touch them is B.S. – although it’s probably still a good idea not to.)

With another tragedy averted, the teen bird years passed in a flash. Or in this case, a few days. Before long, the nest was trashed and their crap was everywhere. It was time for them to go. We awoke one day to find the smaller of the siblings perched on a nearby bike seat, the other stubbornly clinging to the wire. Eventually with some goading, he (again, just assuming) took the plunge.

Like many young adults, they lingered around home for a few days looking for food but eventually left for the greener pastures of the neighbor’s honeysuckle. We haven’t seen much of them lately – at least we don’t think so as all hummingbirds tend to look alike – and assume they’ll be off to Mexico before too long. To spread their wings, mate and start the cycle all over again.

We just hope they don’t forget to write.