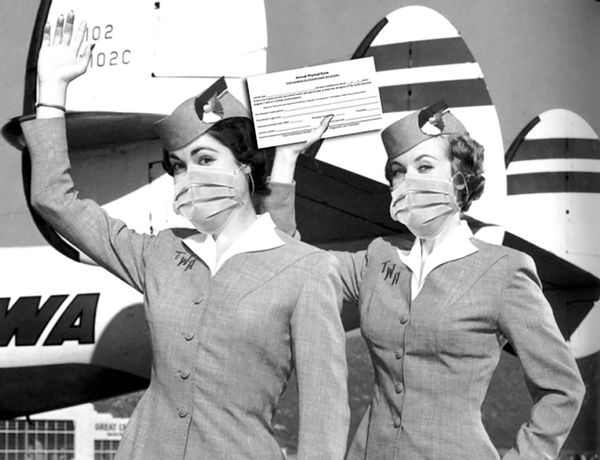 At 2:45 a.m., Dec. 18, 2020, the American Airlines check-in at DIA is deserted. Sleepy travelers, me included, wait, lined out from the roped-off counter. Three a.m. comes and goes.Most of us are on a 5:09 a.m. flight to Miami., with a 3 a.m. check-in. 3:15 passes. We exchange a few looks, comments; wary and weary, as strangers will be, thrust together in the middle of the night. A recorded announcement reminds us to report all suspicious behavior. We scan the deserted counter. Someone mutters, “This is suspicious behavior.”

Finally, four rumpled agents appear led by a crisp female drill sergeant. With no preamble, Nurse Ratched begins striding up and down the line demanding all travelers to a foreign country present proof issued from their destination country that they are virus free. Confusion reigns. Before we get there? How would that work? We try for an explanation. She cuts us off, “I’m not answering questions.”

Suddenly she reverses course. Now she demands all domestic travelers show proof. We consult each other, strangers now allied by this bizarre behavior and unknown requirement at 3:25 in the freaking a.m. There was no mention of this in American ticketing. We have no idea what she is talking about. It becomes increasingly obvious, neither does she. She repeats the condition, but it is now a threat. Some of us – it is unclear who – will be denied a boarding pass if we do not present a recent negative test provided by … someone. She finishes with, “I’m not answering questions” and opens the ropes.

A few days before my departure to the Dominican Republic, Dominican Immigration and Customs had sent me a link to an electronic entry form. In the past, we were handed paper forms on the international flight from Miami to the D.R. This new electronic version has the same questions from years past with a few COVID-19 “Do you have a cough?” thrown in. As an afterthought, the form on the Dominican website states, in its unsteady English, that all this can be done at Immigration in the D.R. Not a chance. If I have learned anything in dealing with the D.R. over the years, it is to do everything early, three or four times, and ask everybody connected if there is anything else remotely possible that may be necessary. Then check again. It’s 50-50 you still won’t have it right.

The requirements are bewilderingly arbitrary and if Immagracion cuts you from the herd for a more thorough look, then it is left to the discretion of a young bored Dominican official how much he wants to mess with you. I dutifully complete the form and submit it – three times before the infant D.R. website will accept it. That is oddly reassuring. This is indeed a web portal to the D.R. government. Entry is as wobbly as its command of English. Now standing before the imperious female, I show her this code printed on paper. It’s all I have. She scans it, studies a computer for a long time. The impression is that she knows it is official Dominican but has no idea what it is or how to decipher it. It just might be what she’s been demanding, but she has no way of knowing. She hands it back with my boarding passes.

COVID-19 has hit us in ways we couldn’t imagine. Its effects will spin out for years, cropping up in the most unexpected places, its future reach for now unfathomable. We have vaccines. Yay. We also have a country that refused to make restrictions mandatory with teeth like a pit bull for scofflaws. Instead, we allowed the self-indulgent – the young idiots, big business, politicians – to inflict their choices on us all. Even yet, those factions bitch about their right to ignore the public good. More than 400,000 COVID-19 American deaths as I write this – the dead have the bigger bitch. But the self-righteous weren’t listening then, and no one hears the dead speak now. The majority died because our leaders abdicated their primary responsibility to lead, especially when the population didn’t want to follow. Our response to COVID-19 politically, personally and corporately has been astonishingly slack jawed. American Airlines’ response to a world in crisis is freshly hatched policy designed to protect American Airlines.

In the air over the Gulf of Mexico, a flight attendant, a diminutive Dominican American, hands out the same paper forms we have used forever. When we protest that we already submitted them electronically, he bristles. “I know nothing of Dominican immigration. I will not answer questions.” He sidles down the aisle thrusting forms at us. His size belies his pugnacity. He repeats himself word for word, over and over, by rote memory. It is obviously a directive from higher up. He has turned it into litany. He is doing his job. No questions. He is a disturbing little drone of the 3:30 woman at DIA.

American Airlines was big business making a go of it on razor-thin margins. Other airlines have folded or been absorbed. American was doing just fine, raking in a $414 million profit in the last quarter of 2019. Now American is running scared, its business model infected by a world economy barely feeling its way forward and vast job cuts gnawing at its employees. Why does American think covering its ass is an appropriate response in this time of uncertainty? Why doesn’t American use some forward thinking and offer a transportation model that incorporates change instead of dodging responsibility? We’re all worried, American – passengers included. Why do you dismiss us rather than find some creative solutions to a problem none of us asked for?

At el aeropuerto, Las Americas Internacional en Santo Domingo, entry is surprisingly quick. My luggage ejects onto the carousel early. Immigracion is a breeze, Customs a rubber stamp. No one asks about the electronic pass. I ask the final official who grants me entry. Oh, that, she says, dismissively, that. The computer is down, we can’t read that thing.