Fathers and sons
Finding a way to honor your late father, while still honoring yourself 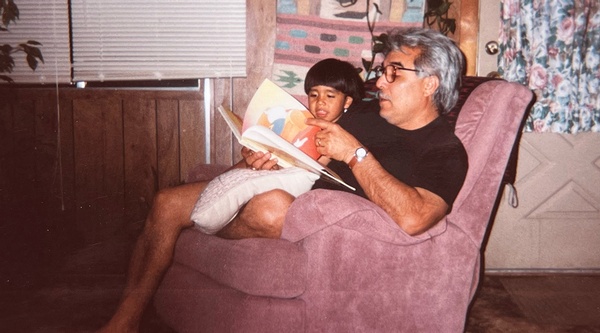 After the death of my father last December, I often find myself wondering, “How do you honor someone who has passed?” How do you choose which parts to remember and which to forget? Do you honor them by doing exactly what they would have expected if they were alive, or do you allow them to step into a different version of themselves – one that you hope they would become if such a thing as an afterlife exists?

My relationship with my father was, like I’m sure it is for many, complicated. As if being the only disco-dancing, fashion and video-game-loving child of my father wasn’t tough enough, there was also a significant age gap between him and I. Born 50 years before me, he was part of the Silent Generation, although silent he was not. Loud and boisterous amongst his family, he would often high-five himself when he thought his jokes (usually in the form of teasing) were just too funny to not be celebrated.

When I was young, he would always arrive home with candy from his work’s snack bar, which contributed to me having a shiny smile filled with silver-capped teeth. He also gifted me my first DSLR camera in college, which was a beautiful gesture of support for my photography. He expected good grades and good behavior from me, and I tried hard to never fall short of these expectations. However, I was often teased by my sisters for being the “favorite,” and from a young age, I found myself both loving and feeling guilty for the gifts and affection that he gave me. But I reluctantly understood why my sisters labeled me as the favorite – I, too, felt like things weren’t distributed evenly in our household.

There were many times when I wished his gifts were based not on materialism, but on our relationship and ability to connect. His strict view that prayer and faith were necessary for life after death weighed heavily on me. With this, I couldn’t fathom how he would be able to view me, his gay son, and not see me as a walking embodiment of sin. Hiding this part of myself was a way of preserving our relationship. However, it made me yearn for the day that I would be gifted his acceptance.

Shortly after college, I came out to my stepmother, who in turn told my father. She feared, “How he might react” if I told him. I spoke to him briefly on the phone that day, but I can’t recall the details about what was said. At the time I felt a small sense of relief, but it was also mixed with anger that I would never be able to tell him myself. Coming out felt like a rite of passage because it required courage to say the words “I’m gay” and the strength to know that it may not be well-received. After that, we rarely spoke about it, and I never dared bring home any boyfriends or dates. I was not yet brave enough.

During my first major relationship, I shared with my then-partner all the fear and insecurities I had with bringing home someone to meet my dad. But it was a fear that we both knew I had to face. On the first trip home, my dad was hesitant to call my partner anything other than my “friend.” On the next trip, this time during Christmas, my partner wrote a carefully worded letter thanking my father for raising his children to become the people they are today. This simple letter was able to warm my father’s view on our relationship enough to include him in the blessing at dinner. It was the best Christmas ever.

A year ago, my father’s health started to take a major decline. A blood cancer that he had fought over a decade ago had come back, and the prognosis was grim. The doctor had given him a few months to live, but the cancer seemed to be spreading quickly. My father, who was 81 years old, decided to not pursue chemotherapy again, and would instead seek treatments when his pain was high.

On a Tuesday in December, he was admitted to the hospital for the last time. My sister and I made plans to arrive later that week with the intention of being there for a couple of days. But on Wednesday afternoon, I received a call. “The doctors said he has very little time left and may not make it through the night. Can you come now?” The last flight from Durango back home to Texas had already left, and we wouldn’t be able to reach Albuquerque in time. Durango is many things, but emergency-travel-friendly it is not. I switched our flight to Thursday morning and found myself praying that leaving at 6 a.m. would be early enough to get us there in time. It wasn’t.

My father passed before the sun had risen, and I was still on the road to the airport. Feelings of guilt started to seep into my mourning, punctuated by this question: How am I to honor him in a way that feels authentic? After a chaotic and eye-opening weeklong stay with family after his death, I had to return home. The funeral service was delayed by several days due to the pandemic, and I wouldn’t be able to attend in person. Worst yet, the streaming access that I was depending on to join virtually was removed. In turn, we had a small service at my home, with my sister and former partner. I was able to mourn him exactly how I wanted with the people that I wanted. It felt like a moment of truly honoring him because I was also able to honor myself.

Just a few weeks before he passed, I asked him, “Did you ever celebrate Día De Los Muertos when you were younger?” I recall his answer mentioning that it was one of his favorite childhood memories, when his mom would take him to the cemetery with sandwiches and candy, and they would pray for their deceased loved ones. This year, I hope to honor him by revisiting the tradition that brought him joy when he was young and one that I hope will bring me comfort as I age.