Fire on the mountain 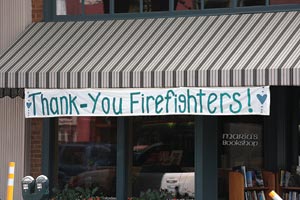 When I first started contributing to this column, Missy Votel sealed the deal by telling me I could basically write about whatever I wanted to. She told me in one desperate moment she’d even written about Sponge Bob Square Pants.

I was going to accept the gig no matter what – in fact it was an honor that I’d be given the opportunity – when I moved to Durango in 2010 writing for the Telegraph was the only paying free-lance work I really had in the Four Corners region.

I’ve gotten to know Durango through the lens of being a writer for the local newspaper, and I can think of no better medium. Coupled with my six-year gig at Zia’s, I’ve grown to love this big, small town for what it is. (I wrote big, small town, because I moved here from Gunnison, and compared to Gunny, this town can feel busy like a city sometimes.)

There is a certain calling of a writer though, especially a small town newspaper writer, when one simply can’t write about whatever she or he wants to. There is one thing on everyone’s minds, and that one thing demands to be given attention. Of course, I’m talking about that big ole fire on the mountain over there. The 416.

It’s the topic of every conversation in one way or another in Durango right now – from the barstool to the grocery store – and it will be so for some time, it appears. As I write this in my apartment on the north side of town, I can hear the choppers. Probably 10 times a day I check social media for updates, as it grows and grows.

So of course, here I am, writing about it. But what to write, where to start? I could start with what started the fire. I don’t know for sure, but I have a feeling I know, and everyone else basically knows as well. Right now it kind of seems like this unspoken thing.

In the spirit of writing about what I know, I realize I have very little understanding about the complexities of how forest fires are fought. I feel like I understand why it’s spreading so quickly – I mean it was 50 degrees and sunny for most of December and January, we are clearly in an epic drought – but every time I read a new post from the 416 crew on Facebook I’m learning about things I really have little to no knowledge of.

But what I do think I know a little more about is firefighters. That’s only because many of my close friends are firefighters. Some are wild land firefighters, and others work in our local departments; some have been at it for quite a while, while others are just getting into it after realizing they wanted more meaningful and structured careers. Ironically, or not, they are all climbers; most are alpinists who have endured exposure to the elements for days on end that I have never dreamed of. They are tough cookies.

“I’m just doing my job,” is basically what every firefighter has told me when I’ve thanked them for what they are doing. And they are, but they have a job of extreme importance.

It’s very humbling to realize the difficult jobs some people do in order to keep the rest of us safe and healthy. My girlfriend is a nurse, and I’m constantly in awe of the work she does for our fellow human beings. Sometimes I think writing is important, and it is, but the importance of the work that our public servants do far surpasses anything I do on the day to day.

I’m not one to write short “La Vida Local” columns, often I’ll end my pieces by saying I wish I had more words. This time, the ending is what matters. I want to say, “thank you” to all the firefighters, and each and every civil servant who is ready to take care of someone else in the toughest of times.