Flying by the seat of our pants

I’d been trying to make my way to London with a woman they’d seated 10 rows ahead of me on the opposite side of the plane for our wedding anniversary.

The morning of our flight, the airline informed us that our connection from Durango, which would have taken us to a Denver-Chicago-London link, had been cancelled. For no particular reason. At least none the agent would share with us.

Five lugubrious hours in the Durango airport waiting for a later flight gave us time to talk about the unexpected
nature of travel. Steinbeck once framed our dilemma this way: “People don’t take trips, trips take people.” Yes, we’d been taken. Our itineraries and our expectations were like two zeppelins passing in the night.

The rebooking agent apologized, because our new seats kept us separated. If the plane went down, I joked with the agent, we’d have to consider it a permanent separation. 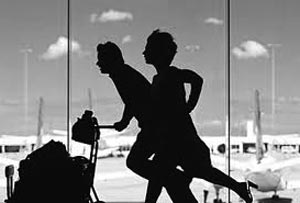 On the second leg of the trip, routed through Phoenix in order to catch a flight that would eventually take us to Chicago, we encountered more trouble. The plane to Chicago had been delayed 30 minutes, giving us precious little time to make our London connection, but another agent tried to allay our fears by explaining how a half hour departure delay, riding an eastern tailwind, would put our arrival in Chicago only five minutes behind. Airline math. A formula for crunching flighty figures. I remained silent.

But the plane out of Phoenix took off 45 minutes late when a passenger had a temper-tantrum as we taxied for take-off and he had to be removed. We were forced to return to the terminal and sat on the tarmac, awaiting a new clearance.

I waved to the woman 10 rows away who stood and waved back at me. This affectionate exchange I hoped would eventually lead to an international concourse.

Then our luck changed dramatically as we approached Chicago. My temporary seating partner checked her phone to see if my flight had already left, like most everyone else’s, including hers. She smiled. It hadn’t. Even better, its departure gate was located in the same concourse where we’d be landing. If I could deplane rapidly and sprint the distance of eight gates while juggling our luggage, I might get a foot in the door. I thanked her and then violated an airline safety directive: I unbuckled my seatbelt before the plane had come to a full stop.

Rushing past my wife’s seat, I shouted “Meet me at Gate 11B,” pointing with my nose in that general direction. Other passengers gathering their belongings gave me dirty looks.

One of them tried to trip me, but I leapt over his extended foot like an awkward high school hurdler. I was on fire!

In my mind’s eye, I’d seen scenes like this on TV, so I glanced behind me to see if the police were after me. After passing about three gates my lungs burned, my legs ached and the duffles swinging from each arm dragged me down like anchors. The passengers on the moving sidewalks must have thought they were standing still, but of course, technically, they were.

On my left I spotted Gate 9. The number blurred, but not because of my speed. Sweat trickled into my eyes. Only two more. Only one more. I think I can. I hope I can. Gate 11A finally appeared. I slowed down, expecting my destination to be within eyeshot. I stopped. 11B?

Panting, I lowered my bags to the floor and wiped my forehead with my sleeve. Then I saw an extremely long line of passengers snaking its way out of a nearby waiting area and into the throng, a disgruntled and miserable set of travelers who’d been forced to wait in purgatory for a chance at being sorted to their destinations. Even without any sign to announce the gate number, I knew I belonged there. These were my people. I grabbed my bags and cued up.

Tapping the shoulder in front of me, I cleared my throat. He turned to face me, a scowl etched into his skin like a fresh tattoo.

“Excuse me, but is this the flight to London?”
“Flight?” he exclaimed in a thick British accent. “This is a cock up disguised as an aeroplane!”

Eventually, my out-of-breath companion joined me and we inched our way toward the boarding portal where we’d be sealed in together, lifted from the earth and set back down in a different airport that probably offered the same brand of suffering, perhaps as penance for the audacity of thinking the world might be a little more fascinating if viewed from a location we couldn’t call home.