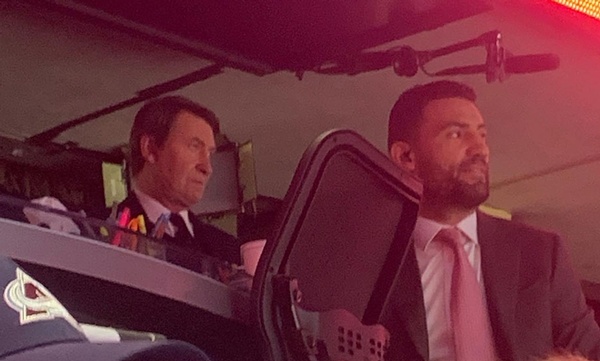 “You miss 100% of the shots you don’t take,” Wayne Gretzky famously said.

Heeding this sage advice, I handed my phone to the guy sitting behind me who had a slightly better angle of The Great One, who was a mere three rows from where I was sitting in Ball Arena.

There were some other guys with him, too, like BizNasty, of “Spittin Chiclets” podcast fame, who seemed to be especially popular with the younger dudes. But no shade to Biz – who later would shave the top of his head after losing a humiliating wager against the Avs – all eyes, and phones, were on Gretzky. In fact, people had stopped trying to take the “pretend selfie” altogether and were just blatantly paparazzi-ing the hockey god in their midst.

Aside from having quite possibly the best flow ever in the sport of hockey, Gretzky, of course, is the greatest human to ever put his stick on the ice. And other than once passing a guy who I’m convinced was Joe Sakic at DIA, this was the closest to hockey greatness I had ever come. I would treasure those fuzzy iPhone pixels of Gretzky’s likeness for life – of course after posting it to Insta so everyone knew how cool I was.

The Gretzky sighting was the icing on a hockey pilgrimage of sorts. A few days earlier, a friend in Denver had called me to say she had extra tickets to an Avalanche playoff game. Her husband, who had season tickets, was going to be out of town and said she could invite friends, “as long as they like hockey.” Which I do – as in driving-six-hours-across-the-state-at-a-moment’s-notice-to-see-my-guys kind of like.

OK, so maybe I’m obsessed – at least more than the average mild-mannered mom should be about a professional sport where sweaty men regularly beat the crap out of each other. But in my defense, I grew up in the Northland, immersed in the culture of ice rinks, mullets and missing teeth. Despite this, I never played hockey growing up – it just wasn’t an option in those dawning days of Title IX. Instead, I figure skated – that is, until it was discovered that I had the grace not of a gazelle but a giraffe.

After accepting that “Ice Castles” and Robby Benson weren’t in my future, I finally got the opportunity to play hockey on a women’s team several years after I hung up the toe picks. By now, I was living in Colorado, where I had adopted the Avalanche as the only sports team I really cared about. (My original guys were the Minnesota Northstars, who later moved to Dallas and became dead to me, a tragic tale for another day.)

Anyway, it wasn’t until playing – or attempting to play – that I truly got an appreciation for how badass the sport of hockey really is. As if figuring out how to put on all the gear isn’t hard enough, then you have to flail around on a sheet of ice swatting at a small, fast-moving piece of rubber with a long projectile whilst wearing sharp blades on your feet and trying not to kill yourself or anyone else. Oh, and the whole time you’re feeling like you’re going to have a heart attack, because even though you skate slightly faster than paint dries, it is hard work to get all the gear and body parts moving in the right direction, only to have to stop and go in a completely different direction. The whole thing kind of gives new meaning to “miracle on ice.”

And sometimes, let’s just say, things don’t go as planned. Over the years, I have sustained a sprained cankle from a slap shot I stupidly tried to stop, two dislocated shoulders, a bloody ear (taped up by the Zamboni driver), a pulled hammie, a pulled groin and more hits to the head than a person my age should sustain.

It’s a silly, ridiculous, awkward, brutal, humbling and impossibly frustrating sport. But, there are those occasional glimmers of greatness that keep you coming back – like the goal I once scored off a lucky bounce from my, uh, lady parts, which will forever be known as the “immaculate deflection.”

However, in the capable hands and feet of a gifted athlete, the sport of hockey is a thing of beauty. It’s a brilliant display of strength, speed, strategy and silky smooth moves that brings tears to the eyes of us mere mortals who struggle just to get over the boards.

Case in point, Avs defender Cale Makar, aka the baby-faced assassin, who at 23 has the hockey world rightfully fawning all over him. Although Cale and I both have been playing about the same amount of time, he is going to the Stanley Cup, whereas the only cup I’ll ever see is in my shorts. (Yes, girls wear them, too – no one wants to take a puck to the junk.)

And speaking of pucks to the junk, I am sorry to all the other fans out there whose guys didn’t make it to the finals – especially the fan of a certain losing team who works in my office. But I won’t salt the wounds, even though it’s a good thing his team lost, because it would have made for weird workplace dynamics when I sang “We are the Champions” as he cried into his Rangers jersey. And whether you like the Avs or not, I think we can all get behind universally hating an ice hockey team from Tampon Bay. Oops, I mean Tampa – thank god for spellcheck! – even if they have that Stamkos guy from “Full House” and his fabulous mullet.

Of course, by the time you read this, the Avs will have played their first game. And I will have aged another 10 years, my dogs will be suffering PTSD from all my screaming, yelling and antics, and I might be eating my words for (accidentally) referring to the opponents as feminine hygiene products. But then again, it’s hockey – where colorful chirping is celebrated. And, like the GOAT says, you miss 100% of the pot shots you don’t take.