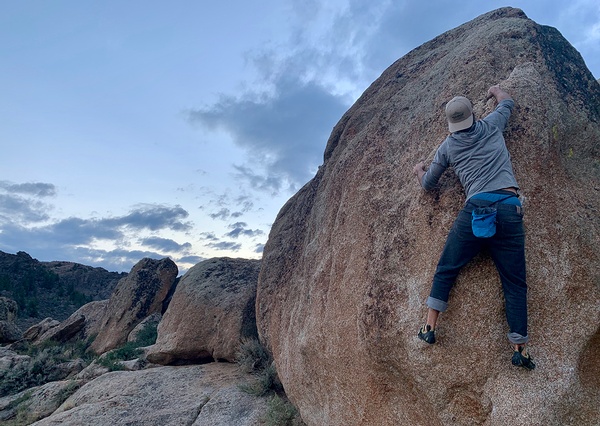 It was a weird night, during a weird month, and a strange summer. Just 30 minutes prior, at 8 o’clock on a Sunday evening a man was knocking on the door, saying he was with the United States Census. We’d filled out our census months before, so I wondered why the hell he was bothering us on a weekend evening. Quickly he explained that he was trying to find out how many people lived in the house next door. I thought that it was none of my business to tell him that, so I just told him I didn’t know.

Thirty minutes later, my dog Hope was barking at the front door and I looked out to see what she was barking at. (Usually it’s the neighbor’s cat.) Something caught my eye on the front porch – it was a dessert covered in aluminum foil – and I opened up the front door to check it out. Sure enough, it was a crisp, accompanied by an anonymous letter, with a small clue of who it came from.

We’d already had dessert, but since my fiancée, Amber, and I both have sweet tooths, we figured what the hell, let’s dig in. Second dessert, certainly not the worst thing in the world. We’d burn off the calories sooner or later.

That gesture, which we shortly figured out was from our dear friend Haley, was the perfect way to close out the summer, as the calendar flips to September and fall is in the air.

It’s been a weird summer, to say the least. I feel like Durango hasn’t been the Durango I’ve come to know over the last decade. Tourists have annoyed me more than ever; especially when I hear people saying they’ve come here to get away from COVID, or they have attitudes about following our mask order. I’ve felt disconnected and disgruntled, but luckily I haven’t felt depressed; though I can certainly empathize with people who are depressed right now.

I have suffered greatly from depression in the past, and I have figured out how to manage my own mental health: primarily through exercise, a decent diet, good sleep, a job I love, and Vitamin D.  I also feel fortunate to have a loving fiancée and dog, one of the many COVID-era puppies that brought joy to Durango.

While I feel like I have a handle on depression lately, my anger is a bit more of a wild card. My anger was at an all-time high when Trump got elected. I was shocked that the United States would have elected someone like him. Nearly four years later, though, I get it. I have a better feeling for the temperature of our country and the systemic racism and economic challenges that plague our nation. To paraphrase Michelle Obama, “I understand why people voted for Trump, but I don’t understand those people who did not vote at all.”

I do my best to channel my anger. I don’t wish to be violent to any other human being. Being out in nature, and listening to hip-hop are my two current prescriptions (with a small dash of sativa).

I also have been trying to focus on small acts and victories, because overall I feel like we’re losing. And when I say we, I mean those of us who are anti-racist, pro-environment, pro-democracy and for creating a more just country, a more perfect union. And though I vote Democrat, I feel like that party has to change as radically as many other things need to change in our country. The Democrats are often just as bad as the Republicans, and to paraphrase my favorite comedian Dave Chappelle, “they are missing the dunk.”

While I will certainly be voting for Joe Biden in the presidential election, I’m mentally preparing for four more years of Trump, because I know he’ll do anything in his power – legal or illegal – to get re-elected. I’m also keeping a close eye on the race for Colorado’s third congressional district: Diane Mitsch Bush, a Democrat, who is running against Lauren Boebart, a Republican, who is a supporter of the dangerous QAnon conspiracy theory. If you aren’t familiar with QAnon, I suggest doing some research. The group is listed as a domestic terrorist threat by the FBI – and a confirmation that Trumpism can get worse, much worse. I’ll be voting for Mitsch Bush, that’s for damn sure!

Back to the small battles: this last weekend I made a quick trip up to Gunnison and visited one of my favorite places in the world: Hartman Rocks. This area has become much more popular over the last few years, and I must say the Bureau of Land Management has done a decent job with maintaining the area and fighting off the impacts of increased visitation. Signage, assigned campsites and new toilets have all been welcome additions.

But there’s one new campsite that drives me crazy, right by some of my favorite boulders to climb. The site is highly unnecessary in a place with so much space, and a bunch of vegetation was killed to create it. Local climbers have been working with the Bureau of Land Management to restore the site to its original glory, and I’ve added my voice, suggesting they remove the site and block off access to vehicles. I’ve got some hope the next time I visit this site will be on its way to being restored. And, if that does happen, it will soothe my worried soul, just a little bit.