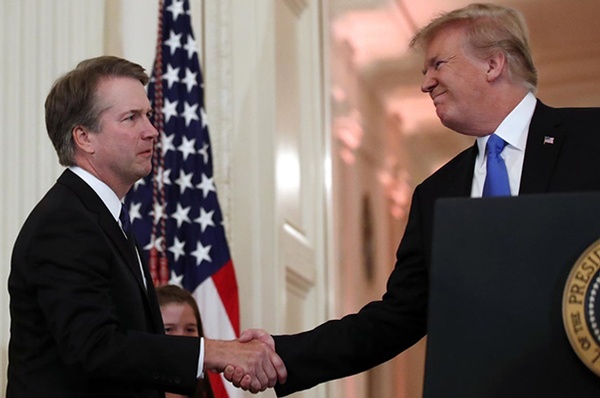 Sexual assault disorder (SAD) is not exclusively a man thing, but what’s really sad is the behavior is so ingrained in the drinking culture that this alcohol-induced lifestyle choice leads to acute cases of repressive memory disorder (RMD) and the assaulter, unable to recall what he did, sometimes denies his actions even in as little as the morning after. Binge drinking (even beer) may explain the memory blackout, but the victim suffers the exact opposite response, remembering what happened for the rest of her life.

In light of the recent SCOTUS nomination procedures, it also appears some of our elected officials are beginning to question whether it is even proper for anyone to be held accountable when sexual assault charges are lodged.
The thinking goes like this: a person’s behavior may be the result of a condition that can’t be helped, especially if it occurred in those good old days when boys were expected to sow their wild oats. In the wild oats euphemism, the male represents the farmer and the female embodies the earth. On the surface it appears to be a healthy metaphor, full of robust natural comparisons that unfortunately fizzle out if we remember how the petroleum industry’s drilling and fracking practices have provided us with another metaphor for harvesting the earth’s resources.

An additional shift in our collective consciousness arises every time a woman publicly makes any allegation. We use the word “allegation” just like reporters use the word “alleged” when talking about a suspect’s arrest, in order to preserve his or her right to due process. But women who lodge complaints are often silently convicted of trying to ruin a man’s life by bringing up something his RMD already dismissed. Or could she be seeking revenge for feeling humiliated by a man who turned her down? She may have made the whole thing up. Any woman voicing any complaint can end up being classified in the public’s mind as a Woman Emoting an Imaginative Revenge Disorder (WEIRD) and if one woman in a hundred-thousand admits to doing so, then every woman must be harboring the same motive, unless of course the archived 8mm Kodak films are produced to prove she might be telling the truth.

It appears I’ve paragraphed myself into a corner. Some readers may believe I am actually questioning the legitimacy of sexual assault complaints,

so it may be appropriate to come clean about what happened to me. My experience is trivial compared to the sexual dynamics women deal with every day. And to be clear, at the time of my encounter I hadn’t been drinking, smoking weed or digesting any mind-altering drugs. At least, let me say for the record, I don’t remember. The woman involved must remain anonymous, unless she comes forth to file a complaint. Defending myself would only result in exposing not the woman but an overwhelming and somewhat sordid lifetime relationship with literature in general, and poetry in particular.

Once while browsing the shelves at a bookstore coincidentally dubbed Between the Covers, I came upon a book title that caught my attention: Poems That Touch You. Immediately the words felt like an awkward title for a book of poems, and as I browsed the pages it

certainly lived up to that hunch. You see, I’ve read poetry that didn’t touch me, and the truth is – if I had to choose – I’d prefer what’s less invasive. Sadness, rage, hormonal indiscretion, it all amounts to a crafted literary-kind-of stimulation, like a sonnet that couples with itself in the last two lines. I do not want any indiscriminate touching when I pick up a book and stand in the aisle reading a page or two, clueless as to what I’ll feel. Women don’t either. Boundaries ought to assert themselves in a world so random.

I remember accidentally turning and bumping into a woman who didn’t expect it, touching a spot she preferred to keep to herself. She immediately and justifiably pulled away. To her I am no different than the poem she was forced to memorize in the fifth grade and has since forgotten.

If art must imitate life, then let us not be touched when all we want is to be moved.