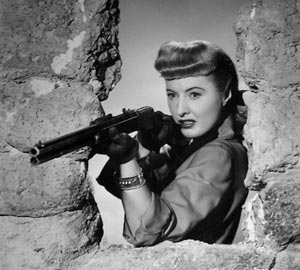 When I was in eighth-grade, a classmate shot me pointblank in the thigh with a BB gun. (I will refrain from using his name, since in this day and age, it would be really easy for him to find me and seek revenge. Although I wouldn’t be at all surprised if he’s in the clink.) Fortunately, it didn’t break the skin, but it did leave a nasty welt. From that point on, I developed a healthy fear of guns – and chewing tobacco, although that’s a story for another day.

But then came the nonwinter of 2017-18. And as they say, desperate times call for desperate measures. See, this stupid La Nin?a put a serious damper on the annual New Year’s Eve hut trip into the San Juans. Typically on these
trips, nondrinking hours are spent skiing, sledding, drink-

ing and skiing some more. But this year, with scant snow, any kind of downhill skiing was out of the question. Panic set in as to how we would entertain ourselves for several hours a day without the benefit of untouched powder or wi-fi. I mean, books, cards and conversation only go so far. Surely, with lack of recreational activities, we’d be running low on alcoholic supplies mid-way through the first day. I’d be lying if I said visions of the Donner Party didn’t flash through my head. Who knows what someone would be forced to do when faced with a beer famine on day three?

Alas, like those brave pioneers, we decided to stick it out and make the best of the sparse conditions. We didn’t need copious amounts of fresh snow to have fun – in fact, we could find plenty of other outdoor activities to entertain ourselves, like, um, hiking. Yeah, and, well, that’s when our options started to wane. Thus, it was decided we would really outdo ourselves and host the first-ever Hut Olympics, guaranteed to take up at least a few hours between morning and afternoon happy hours.

I took it upon myself to coordinate the premier event, the beer can biathlon (technically a triathlon, since fat bikes and shot-gunning were also involved). As much as I would like to claim this as my own brilliant idea, it was one introduced to me years ago my some of my “rural” kinfolk in South Routt County. As the name implies, it entails the perfect sporting trifecta of skinny skiing, beer drinking and shooting. Its beauty lies in its simplicity – and the fact that beer serves a dual purpose of not just hydrating but also providing something to shoot at. (*As a side note, I would like to say biathlon is one of the most unsung winter sports there is. To skate ski like a maniac, stop, lie down, shoot a target and get back up and resume skiing – all in a spandex onesie – is truly bad ass. Not to mention how they manage to go to the bathroom.)

There was just one problem with my proposal: I did not own a BB gun. Suddenly, I was faced with the very real and scary prospect of having to buy one. I know it’s my God-given American right to own a gun, but something about bellying up to the gun counter made my inner pacifist queasy. (Yes, last month I said I wanted to take all the guns and throw them in a bottomless pit. But technically, a BB gun is not really a gun, kind of like the gun world’s equivalent of showing up at Sturgis on a moped.)

Despite my unease, Olympic dreams were riding on it, so I sat down, googled the nearest purveyor of air arms and got in the car. Upon arrival, I headed past the work-out clothes, badminton supplies and kids soccer cleats that typically draw women of a certain age such as myself, and headed straight to the guns at the back of the store.
A man and a woman were already there – and I was relieved to see they were taking all the clerk’s attention. As luck would have it, the air rifles were on display in front of the counter – and on sale! This would negate the need for the clerk’s assistance thus raising any suspicious about my complete and utter incompetence or untoward intentions. I casually surveyed the offerings – and while my head said “Red Rider,” my inner Annie Oakley was drawn to the pink Daisy Pumpmaster 760. Something about its Barbie pink camo-color scheme made me feel better about my impending purchase. I mean, if you’re buying a pink gun you couldn’t be all that hell bent on damage, death or destruction.

I carefully pulled the gun out to get a closer look, thinking I’d grab a few BBs and be on my way without detection. But then I had a strange feeling I was being watched. I looked up suddenly to find that the man next to me had me in the crosshairs of his 20-gauge.

“This is what you need,” he informed me, as he pointed the long steel barrel in my direction.

Now I am no expert, but I’m pretty sure pointing a gun, whether loaded or unloaded, at another person violates the No. 1 rule of gun safety, not to mention shopping etiquette. Unsure if I should dive behind the counter or make a run for it, I was relieved when the young man working the desk intervened. “Sir, we ask that you not point the guns at other customers,” he advised.

Sheepishly, the man put it down, and I stammered something about not wanting to kill anything, except beer cans.

“I want mine for coyotes,” he offered proudly, as if I should congratulate him on his fine taste in weaponry.

I said a silent prayer for the animals and critters of the world as I nodded and quickly gathered up my container of shot and made my way to the cash register.

Now, I’m not going to lie – there was something empowering about making such a purchase. Kind of like the first time I legally purchased weed – a little unsure that it was OK and someone wasn’t going to come out and lecture me about shooting my eye out or waiting an hour before eating that second edible because “it wasn’t working.”

Nope – nothing of the sort. I paid, casually grabbed my new Pumpmaster, shoved it under my arm, and walked out. To be fair, I did sit down later and give the directions a thorough read. And once I figured out I am the rare breed of ambi-freak that shoots and winks on the same side, dare I say, I became quite the markswoman. Alas, it was not enough to win the Hut Olympics. See, although the Daisy Pumpmaster may have a pretty paint job, she was all looks. Turns out, under the rigors of Olympic competition, she jammed and the little plastic lever thingy that feeds the BB through the other plastic thingy (*not the technical name) broke off, forcing my team to take the bronze. It was a stinging defeat I may never quite get over. Needless to say, upon return to civilization, I immediately upgraded to the Red Rider.

But not too worry – this is not a gateway to bigger and more powerful, nor will I be running out to join chickswithguns.org. And while I wouldn’t go so far as to say the world has gotten safer by me owning a BB gun, it most certainly has not gotten more dangerous. Unless, of course, you’re a beer can – or that kid from eighth grade.