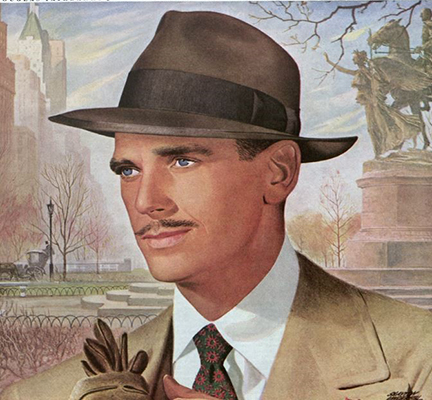 My mother recently sent me a link in an email. Now I know that when mothers send links in emails, the links usually lead to videos that were funny in 2004, or expired pages on their local newspapers’ websites, or news that Bill Gates wants to give me (me!) a new computer. But this particular email link was useful, because it led to a list of high-quality items that a person need purchase only once in life because of their durability. You know, things like a Stanley thermos or a vasectomy.

I happened to be in the market for a new blender, so I figured I’d listen to Mom and spend a little extra for one that will last me until climate change ends civilization as we know it. But the whole blender idea went downhill as fast as a California mudslide as soon as I walked into the hat shop.

It’s no secret that I like hats. I like how the right hat can make me feel like Humphrey Bogart and look like Willie Nelson’s progeny. I like the air of mystery when the brim veils my visage. I especially like wearing a hat to restaurants, where there’s no place to hang it anymore because that courtesy died with American isolationism and comprehensible jazz somewhere before 1950 so you have to cradle your hat on your lap while eating or else leave it jauntily perched atop your noggin despite the rule preached in elementary school that boys can’t wear hats inside even though girls can and that rule makes no sense anymore now that we’re pretending to care about gender equality.

Because I like hats so, and because there’s not a custom hat shop where I live, of course I walked into the hat shop in this unfamiliar town. Of course I tried them on. Of course I asked about the base price after learning that every hat in the joint was custom-made. And of course I would have normally dropped the hats like a hot pork pie and bolted from the premises after hearing the cost of a custom lid.

But I – I listen to my mother. I understand the value of a purchase that will last me the rest of my lifetime, so long as I don’t encounter any stiff breezes. So I asked the good (and not at all mad) hatter to size me up and hat me.

And I am glad I did. The entire process taught me a great deal about the craft of millinery. For starters, I learned that millinery is hatmaking for women. Men just get hats. I also learned that haberdashery, although fun to say, is not in fact hatmaking, but I had already purchased the title of this column before learning that.

Furthermore, did you know that a hat becomes a tax-deductible expense the moment it, and the experience of acquiring it, becomes the central premise of a newspaper column? It’s true, I hope! Because this hat is the first purchase in my lifetime that has required a deposit on commissioned work.

You see, unlike what any reasonable consumer might expect upon ordering a tailored accessory, a hat isn’t made in a day. The shop didn’t close for an entire half hour after I placed my order, yet the man said I’d have to come by at a later date to collect my hat. All he could do with me sitting there staring at him is size my head.

I imagine a standard head-sizing doesn’t sound like a big deal to many of you, unless you too grew up hearing commentary from your mother about the girth of your head and how you’re lucky to have even made it through the birth canal. I expected that the hatter’s Velcro headband wouldn’t even make it around my skull. He’d have to call for reinforcements. I’d be told that custom hats don’t come in plus sizes, and that my deposit was nonrefundable. I nearly fled the shop.

But I worked through the sweat and the shakes, and it turned out that my head is a perfectly normal large size, even if it is indented on one side, making me look rather like a lima bean. Like a kid who did a good job at the dentist, I got to pick out my very own feathers from a box of feathers, and the kind hatter attached them to my hat for me when I picked it up before leaving town.

He told me this hat would last me a lifetime. And you know what? He’s right. Because for what it cost, you better believe I’m never wearing this thing outside the house.