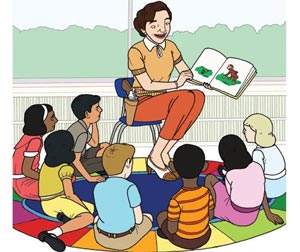 It’s reading time. The students gather around their teacher, pillows and cushions supporting their tender spots, as Miss Aimee introduces the book she’ll be reading.

“Children,” she says, “quiet down now. Our story this afternoon is titled Good Guns, Bad Guns. It’s not written by an author, but by a group of authors. They call themselves the NRA. Do you see the eagle on the book’s cover? It’s like their signature. They say it stands for freedom from ignorance and fear. Don’t be afraid to ask questions, but remember to raise your hands first.”

No hands are raised, so she opens the book and begins reading.

“Bobby’s daddy owns a gun. He keeps it in a secret place, and Bobby knows he’s not supposed to touch it, even if he noticed where his daddy hides it.” The picture she shows the class depicts a bedroom, a bed with two fluffy pillows. The table beside the bed reveals an open drawer with a pistol inside it.

“Bobby’s daddy owns a good gun. We know it’s a good gun because it waits quietly like a guardian angel beside the place where Bobby’s mommy and daddy sleep.” She turns the page and shows the class a picture of the pistol with an eagle spreading its wings so wide they seem to reach around the pistol’s grip.

“Bobby’s teacher also owns a gun. Sometimes she keeps it in her desk drawer, and her students know they’re not supposed to touch it.” She turns the page and presents a picture of a classroom, with students at their desks and a teacher standing at the blackboard spelling out the word G - U - N in neat capital letters. An American flag hangs beside the classroom door and all the drawers in the teacher’s desk are closed.

A hand shoots into the air. “Yes, Lee, do you have a question?”
“Why can’t we see the teacher’s gun?”
“That’s a good question, and it brings up a new word. This teacher carries a concealed weapon. Concealed means the gun is hidden, or difficult to see.”
“I think I see it behind the flag” a girl in a red dress volunteers as she stands up and points toward the book.
“No Bristol, the gun is not behind the flag.”
“I see it, I see it,” shouts a boy to her left. “It’s hiding in a shadow inside the teacher’s sweater.”
“You may be right Donald, but where ever the gun is hiding, it’s also a good gun because the teacher takes care of it. Any more questions?”

No more hands are raised, so the teacher reads from the next page.

“Once upon a time, schools were not allowed to keep guns in closets or cupboards, but Bobby’s dad’s gun was not enough to keep Bobby and his classmates safe.” She rotates the book so her students are able see the picture of a school cafeteria where excited children stand in line to collect their lunches.

The cook is smiling as she serves each meal, a gun holstered at her waist. The principal is watching, making sure nobody cuts in line. He too is wearing a gun. The janitor’s cart is parked near a table while he mops up a spill. There’s a rifle secured to the cart right beside a broom.

“How many guns can you count in this picture?”

Bristol counts one, Donald sees five, and Lee isn’t sure he sees any at all. Nobody notices the rifle mimicking the broom.

“Does anyone remember the word for a gun that stays hidden?” “Sealed?” Violet timidly suggests.

“That’s very close, Violet. The word is actually concealed, which means the gun is hard to see.”

“Miss Aimee,” Donald blurts out, “please tell us how many guns are in the picture.”

“The school is much larger, Donald, than this one picture. It might be impossible to count them all, especially if some are hidden.”

“Are they all good guns?” Bristol asks.

“That’s a good question. Let’s turn the page and see if any bad guns appear.”

The teacher turns the page and starts to read. “Slinky carries a backpack to school and he keeps it in his locker.” Violet giggles. “Slinky is a funny name” but the teacher ignores her and continues reading.

“Slinky took his daddy’s gun while he wasn’t looking, and he stuffed it into his backpack.”

She shows the class a picture of an open locker with the barrel of a bright red gun poking menacingly out of a backpack. She stands and walks

among the seated children so they are all able to carefully study the picture. “Can anyone tell if this is a good gun or a bad gun?” the teacher asks. “It’s gotta be a good one.”
“What makes you think that, Lee?”

Donald excitedly waves his hand. “I know, I know” he shouts.
“Let’s be patient Donald and listen first to what Lee thinks. Lee?”
“I think it’s a good gun because it’s in the school.”
“OK Donald, what do you think?”
“It’s a sealed gun, and we can’t never tell if it’s good or bad if we can’t see it.” “Do you mean it’s a concealed gun, Donald?”

“I don’t know, Miss Aimee. This gun stuff is hard.”
Before the teacher can answer, the bell for recess rings.

“OK children, let’s put our cushions away, and let’s not worry about how many guns we can or can’t see until we finish the story tomorrow.”
The students gather their things and hurry out of the classroom. Miss Aimee

closes the book and sits down behind her desk. She reviews her lesson plan. Surely it’s obvious which gun is the bad one from the pictures. Something must be very wrong with the narrative.