Have a GFF holiday 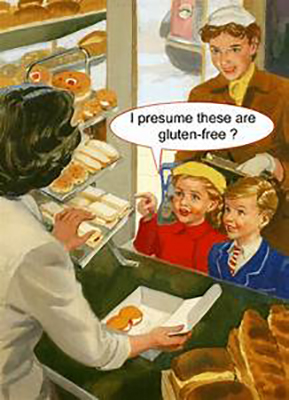 Any day now, I’ll walk into a shop where a “gluten free” sign hangs on the wall. Striding up to the counter, pointing toward the sign, I’ll ask for a free bag of gluten. I haven’t done it yet. I’m rehearsing a straight face. Until I succeed, any shop can safely keep the likes of me away from its counter simply by inserting a proper hyphen between the two words. But please, no colons.

The gluten-free diet evolved as a health alternative for people who no longer want to suffer the intestinal discomforts of gluten intolerance. It takes guts. Excessive gas and diarrhea inspire many of its victims to adjust the way they eat. A gluten-free friend told me at a social gathering how his gluten-free diet has significantly reduced embarrassing encounters at social gatherings. I congratulated him, discretely of course, as I cautiously squeezed his hand.

The word “intolerance” fosters such an awkward relationship between those who won’t eat gluten and those who will. It’s not the same as telling someone you have a peanut allergy. Pop a handful of nuts into your mouth and the doubters can watch while your face swells up and you start wheezing. If you manage to mumble “I told you so” before doubling over, at least you’ll have created a believer.

Gluten doesn’t work that way. Claiming you can’t eat gluten won’t prompt a visit from the paramedics, or even a sympathetic flutter of hugs from your friends, and certainly not from strangers. A few people might say, “Gee, I can’t tolerate gluten either” but some will just look at you, roll their eyes and ask, “Well then, what can you eat?”

It all sounds so natural. Gluten is a protein that is supposed to be good for the body. It has been around since the dawn of agriculture. Accounts of historic figures whose lives were shortened by gluten is nonexistent. Julius Caesar didn’t die of gluten, unless his conspirators smeared it on the tips of their knives.

By checking a list of ingredients on packaged foods, disciples learn what to reject – mainly products containing wheat, though barley, rye and many seasonings and spice mixes also include gluten. Sometimes even lunch meat. Not to mention (but I’m going to anyway) durum, einkorn, farina, faro and spelt. If it’s unhealthy to swallow a spelt, then how foolish one must feel having missed spelt while scrutinizing an ingredient list.

Once I hosted a little gathering at my place and invited friends to a potluck. Big mistake. I received earnest replies asking what food I’ll be serving, shadowed by the inevitable follow-up question, “What I can I bring?” By the time I made note of all the dietary restrictions, my spontaneous potluck had turned into a minefield. GFFs sometimes avoid dairy, soy, GMO and even nuts. In the end, I threw my hands up in the air and said, “Just bring something you can eat.”

The quagmire doesn’t give way at just hosting parties. Dining out poses other getting-safely-back-home challenges. You can’t just drop bread crumbs anymore. Menus evolve, and entree descriptions at the better restaurants try to offer customers essential dietary information. Grilled Reuben with choice of side might be phrased as “grass-fed corned beef on Jewish kosher gluten-free rye, baked with amaranth flour and sprouts, grilled in extra virgin olive oil. Topped with an aged, reduced-sugar/salt brine sauerkraut, non-dairy Swiss cheese, on a bed of arugula and kale. 2,655 calories (sandwich only). Traditional low-fat thousand island sauce or heart-healthy vinaigrette dressing available. Substitute sweet potato fries or butternut squash medallions for only $2 more.” I got sleepy just reading about it.

Researchers fear only 20 percent of Americans who suffer from celiac disease – which can be made even more serious by eating gluten – have been diagnosed, but in a study of 55 gluten-free dieters cited by WebMD, 53 tested negative for the disease. Gratuitous gluten-free diets may also pose nutritional health risks. 1.8 million Americans are celiacs, and another 1.6 million observe gluten-free diets. Reportedly, there is little overlap between the two groups. So go ahead. Eat more fruits and vegetables. It can’t kill you. Meanwhile, the $7 billion gluten-free food marketing industry would be pleased to see the trend in self-diagnosis continue to multiply.

Recently I bought four gluten-free chocolate chip cookies for the outrageous price of $5.

I ate one. The remainders I passed along to a GFF who reluctantly accepted them. My aversion to the wretched little excuses for cookies when I handed them over might have been obvious on my face, though I’d prefer to believe his own alternative food experiments had already taught him to be wary.

So during these holiday get-togethers, stay wise. In the end, choosing the best foods for a healthy lifestyle may be less concerned with what we put into our mouths. Instead, our most full-filling decision may be about how much of it goes in.