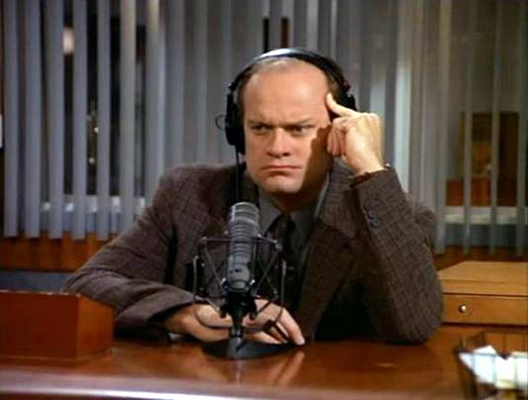 My avid readers across the country – one of whom isn’t even related to me – often comment to me on my distinct voice.

At first, I took this as an insult, the equivalent of saying I have a face for radio, or worse, a face for pre-HD television. But I took the charitable road of assuming they were ignorant. So I explained to them how newspapers work, that you cannot actually hear my spoken elocution in print.

Then they backpedaled to explain that they meant my writing voice – the distinct way I string words and ideas together. Why hadn’t they said so? I love voice. Voice is an element of writing that you cannot learn in a graduate program, even if you’re paying off that program until climate change renders concepts like “money” irrelevant or you reach the 25-year forgiveness threshold. Voice is the Great Intangible. Dickens has it. Austen has it. Seuss has it. I have it.

In fact, I have it in such abundance that, face for it or no, I am taking my voice to the radio airwaves.

That’s right. Like Colbert taking over for Letterman, or Fallon taking over for Leno taking over for O’Brien failing to take over for Leno, I am the newest host of KDUR’s Four Corners Arts Forum (Mondays mornings at 9!) I am the latest dignitary in a line of DJs so integral to the college radio station’s heritage that even the station manager can’t remember how many people have done the show before me.

Some people feel nervous about public speaking. I, however, did not experience any anxiety going live on air for the first time. I approached my debut on the Four Corners Arts Forum with the same improvisational confidence that I used to take the ACT and choose a career.

After all, the talk show is only 30 minutes long. If sitcoms can fill half an hour with witty banter every week, then I, with a Writer’s Voice and a guest who does some of the talking, should have no problem doing the same. Besides, I sometimes interview people in my career as a writer too, and I am a pro at massaging their quotes to make me sound good.

So the morning of my first show arrived. I appeared at the studio as well-prepared as ever, and alack! I had no guest. But that was OK, because I was the guest. My long-running predecessor, the Johnny Carson of Monday morning radio, brought me on her final show to introduce me to my newest fans. I still had a full week left to find an artistic guest to talk to, and also to choose my walk-up music.

I don’t know what they call it on the radio. But in professional baseball, each player chooses a walk-up song that plays on the stadium loudspeakers every time he comes to bat. A walk-up song can be any song, so long as it has certain defining traits:

• It must be loud.
• It must strike a Pavlovian fear into the opposing team’s pitcher.
• It must be entirely inoffensive to everyone else in the stadium.

As a young and aspiring baseballer, I spent as much time imagining my walk-up music as I did practicing my eye-black application. My future baseball career ended pretty much exactly the same moment that I decided to be a writer one afternoon, but my walk-up dreams never died.

And this – this was, finally, my big chance to live that dream.

And then I called in a favor to schedule my radio guests, and we selected my requested walk-up song from the studio library with six minutes to spare, and I even ad-libbed my first public radio pledge spiel. I think it all came out pretty great.

But why should you listen to my own evaluation? Let me make myself sound good with a follow-up quote from one of my rabid readers-turned-listeners, who said: “I never really appreciated your writing voice ’til I heard you on the radio.”