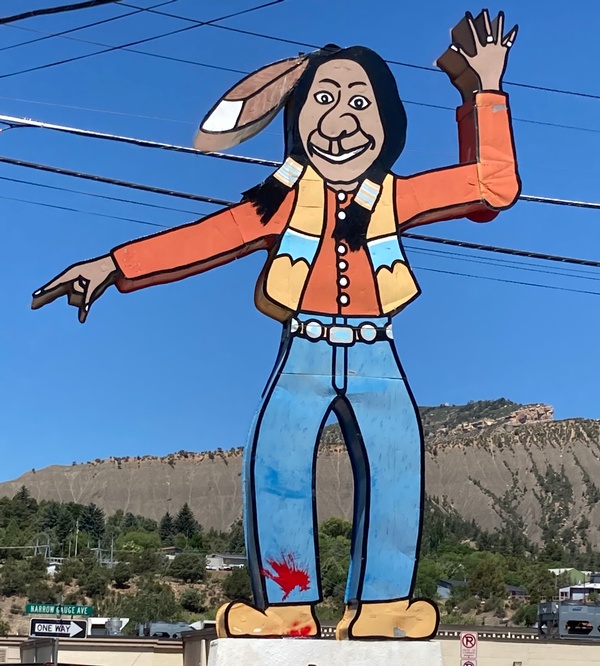 Can we talk? The Chief sign controversy and nationwide protests are kinda making it clear we need to.

Let’s start with the history of whites in America. We stole the lands of Indigenous people and intentionally killed off 90 percent of them in the process. That is our baseline. If you are a white person and not viewing relations with Native Americans through this lens, you fail to understand racial dynamics in the United States.

This isn’t surprising. White people have a very large blind spot regarding the systemic racism of our culture. I’m a prime example. Growing up in Durango, I viewed the Chief as harmless nostalgia for an era of tacky advertising. In 2002, I even used the image for a Snowdown poster. I've apologized for that trespass informally before, but it needs a formal apology now. Even though I felt I was not a racist person, I still committed a racist act by blindly colluding in a system that justifies white appropriation of nonwhite cultural identity. This attitude is, as we see in the defense of the Chief, very common despite being inherently racist, but not in the overt way whites prefer to understand the term.

If your definition of “racist” is the Charlottesville Klan shouting “blood and soil,” and you are disgusted by their violent hatred, that’s great. You aren’t a “racist.” But... that’s not the type of racism I’m speaking to. I’m talking about systemic racism, and it is almost entirely invisible to whites, as it was to me. It undergirds American culture and imbues unearned advantages to white people. In this way, all whites participate in and benefit from racism. Unconvinced? Check out this list:

Some of the most powerful groups in the country are listed above. They represent influence, power and control held exclusively by a single racial group. While being born into and benefitting from a racist system is not necessarily our fault, we have the duty to continually educate ourselves about it, work to eliminate it, and most importantly, change it. This is not easy. White privilege is deep and durable.

Speaking of privilege, the Chief, along with other symbols like Aunt Jemimah, the Washington Redskins, Uncle Ben and numerous other stereotypes fall on a spectrum of appropriation that whites simply do not perceive as damaging. After all, we use caricatures like Fred Flintstone or Marge Simpson to stereotype white people, so what’s the problem with using caricatures for people of color?

One problem is that such caricatures are designed, created, controlled and manipulated by white people for our use, but they are not ours to use. For example, the white owners of the Chief Diner used the Chief sign as a way to promote their business. Because of the big nose, the image was intended as humorous Indigenous artist Ricardo Cate, creator of “Without Reservations,” a cartoon for the Santa Fe New Mexican, also uses a humorous style in his work. Ironically, one of his main characters is even named “The Chief.”

But that’s where the similarity ends. Cate’s work does not justify continued use of the Chief by a gallery owner. His use of humor is designed to raise awareness of racism and the treatment of Indigenous peoples by a dominant white culture. The Chief sign was, and continues to be, used as a business prop; a type of mascot. This is dehumanizing and wrong.

Let me frame it a different way. If a German restaurant created a promotional 15-foot sign of a waving Jewish cartoon wearing a yarmulke, would that be appropriate? Of course not. History and context matter. Most white people see the problem right away because we understand the history of the Holocaust.** Even though we agree that today’s Germans are not responsible for historical atrocities, we still see the use of a stereotyped caricature is indefensible. Yet we can’t see our participation in the same dynamic.

The controversy over the Chief is not new. One thing different this time is a smallish but meaningful movement of whites sensitized due to the ongoing BLM protests. Listening to communities of color instead of dismissing their concerns as “political correctness” or “outsiders taking offense” is critical, and that includes listening to those Indigenous voices for whom the sign is not offensive.

There is one solution I’ve heard that might work brought forward by communities of color: take down the Chief and commission a new sculpture by an Indigenous artist that will represent whatever those communities want it to represent.

Needless to say, I don’t speak for those communities or indeed, any community. What I’m attempting to do is speak to white people as an individual white person critiquing the white race’s behavior.

We can build a better, more equal society, but only if whites humbly acknowledge that we, and only we, hold all the power in this country and therefore have the ability to change it, starting now. Refusing to do this will condemn the country to a terrible path of violent unrest and eventual fracture.

The celebration of Native Peoples at a gallery that provides an outlet for commercial artistic expression is positive, and the Clarks deserve credit for that. However, it is past time for a little cultural evolution.

While the Chief is undoubtedly historical, it is not a history worth preserving. Seventy years underlining white cultural dominance and privilege is quite enough.

Thanks for the chat. Let’s keep it going.

**Actually, this too is problematic. I once thoughtlessly used an offensive caricature to depict an Israeli politician. Satire can be a minefield.