Hope on the rocks
Homage to outdoor refuges and fallen friends 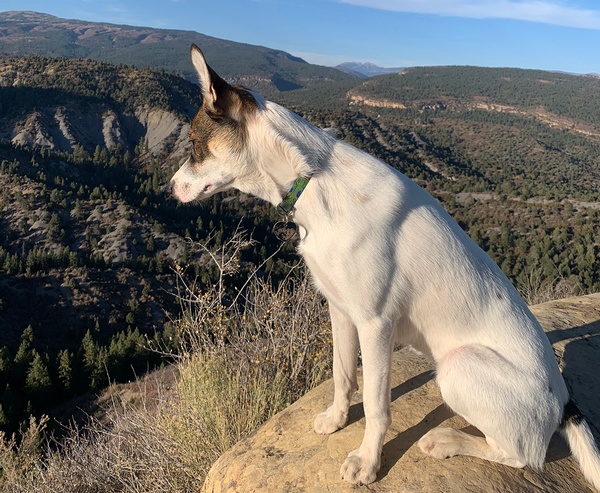 If you’re like me, getting outside for fresh air and exercise every day is a must. That’s one of the reasons I’ve felt grateful to live in an area like Durango during this pandemic. I can still get out on the trails and the rocks; a necessity for my mental health and physical fitness. If I were stuck in an apartment in the city for these last 10 months, well, I’d say you could have put a fork in me, cause I’d be done.

My favorite local quick hike is Hogsback. It can be done in less than an hour, car to car, and since it’s quite steep, it really gets the heart rate going. Since we got our dog, Hope, last March my love for this trail and formation has only grown; as has the crazy shit I’ve seen up there.

Over the years, I’ve seen skiers launch off the top in a big storm. I’ve seen mountain bikers fly down the steep ridge. A couple years there during Snowdown, there was the Hogs Gnar, where people ran laps up and down for the fun of it. One year after my 40th birthday, the trail was covered in snow and ice and it felt as serious as an alpine ridge way high up in the mountains; as if a slip might send you careening down into the abyss.

In the past year, I’ve seen more wild happenings than ever. I think it’s because Hogsback is listed on more and more apps as a biking trail, when in reality it’s terrain only a few select mountain bikers would ride. In other words it’s steep AF.

One day, I reached the summit with Hope, and looked down to the backside to see a man lying there next to his bike. Is he hurt? was the first thought I had.

“They don’t,” I said. “Anyone who bikes this usually hikes up that side, and then bikes down the front side.”

I hiked down and talked to the poor fellow, who by now had stood upright. I got a little bit of his story, that he was new to the area and was learning to mountain bike. I agreed to hike his bike down the trail, and then I asked, “Have you checked out Horse Gulch yet?”

The answer was no, so I gently suggested a Meadow Loop for his next ride. He was more than grateful. A week later I encountered another novice rider heading in that same direction – up the backside, following directions from an app.

Though I didn’t get to linger on the summit that day, I have to say that’s one of my favorite places in Durango. There’s a big flat rock to chill on, the view is so incredible, the Twin Buttes off to the west, mountains to the north, and town just below. No matter how bad of a day I’ve had, if I climb up Hogsback, I’ll be in a better mood when I’m done.

Sadly, and surprisingly, there’s been more and more people carving their initials in the rock at the top; something that I didn’t think people did anymore. But the more people that do it, the more others think it’s OK. I think at some point it would be a good idea to install a registry or something, so people can sign their name to it, with some information about protecting the rock by NOT scratching your name into it.

As I’ve climbed up Hogsback hundreds of times now, I’ve also noticed the human-caused erosion; especially up the backside. Perhaps some rock steps are needed, to stabilize the ridge and slow down that erosion.

Some days, at the top, I think of friends that I’ve lost. Fallen friends seem closer in nature, especially up high where the birds soar.

In the spring of last year, we lost Dan Escalante to an avalanche near Crested Butte. Though some of his close friends had a small celebration of life, I grieved alone for Dan; one of the many challenging aspects of grief in the times of COVID.

Sadly, 2020 wasn’t going to end without another tragedy. Last month, we lost two more great men to an avalanche: Jeff Paffendorf and Bert Perry. The news felt like a blow to the stomach.

I wasn’t very close with Jeff or Bert, yet I would certainly count them as friends. Both were friendly, energetic and positive. We attended Jeff and his wife, Kristi’s, wedding. In October, they welcomed the birth of twin boys.

The last time I saw Jeff was on the local trails, after a quick lap up Smelter. He was smiling and energetic, as always.

Bert seemed to be a gentle giant. I remember the first time I saw him at the Golf Wall. He looked ridiculously strong, and as I got to know him a little bit over the years, he was as kind as he was strong. Amber and I always remarked how great a couple Bert and Angie were.

I will miss both of them, and I know there are hundreds of people out there who will as well. My hearts go out to their families, and I will carry their spirits in my heart. There’s some information below if you would like to help out their families:

Luke Mehall is the publisher of  The Climbing Zine and the host of the Dirtbag State of Mind podcast.