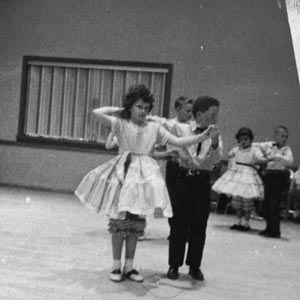 Good news! I believe I am now an official local celebrity, because I was asked to judge an elementary school dance-off.

The dance-off is the culmination of an annual program in the schools called “Take the Lead.” The program’s reputation is so well established that it can afford to take daring risks with your school-age children, such as minting new local celebrities without so much as fingerprinting them.

Of course, when the program leader asked me to judge, I said yes. I’d already been judging fifth-graders all my life. This competition finally afforded me the chance to do so openly, in a socially sanctioned way: by critiquing their rhythm.

I know precisely how much rhythm fifth-graders have, because I was once one myself, and I knew dozens of other fifth-graders all at the exact same time. And all of us together spent two whole weeks, at an hour a week, square dancing in PE class.

The square dance unit was, to put it kindly, brutal. This was unlike flag football or floor hockey, wherein we waddled around the gym on lowrider contraptions that you motored by swerving the handlebars back and forth, and which I cannot find anywhere on the internet to prove that they actually exist.

Square dancing, on the other hand, offered relatively few practical life skills. In fact, we all spent the entire unit trying to a) butt-bump our partner so hard that someone would get knocked over, or b) hip-thrust away from a butt-bump so that the butt-bumper would bump his or her (hint: his) own butt on the floor in a glorious collapse.

There are other skills in square dancing, of course, like the do-si-do and promenading and attempting not to come in actual skin-to-skin contact with another human being if that human being is a girl. We performed all these skills to a recorded voice on a vinyl record; I presume that choreographed square dance music has to this day still never made the leap to CD-savvy listeners.

Meanwhile, Coach sequestered himself in his office. That poor saint had to suffer through an entire hour of this music every year of his professional life. I should call him to see how he’s hanging in there, and also to ask him about those wheelie hockey carts.

Anyway, that’s when I really began judging fifth-graders in earnest, particularly on their rhythm and steps. Even when told to allemande, all my classmates would stop moving, stare at each other to see who would brave a first guess as to what “allemande” was, and then shuffle in vague circles until finally we got rescued by social studies.

In other words, this day of judgment was decades in the making. I arrived early to the dance-off, which was held in a local elementary school gym. In case you’ve never been in more than one elementary school gym, I’m here to tell you that all of them are the same. They have the same cinder blocks, and the same mascots painted on the walls, and the same suffering ghosts of dodgeball victims past. Despite the passing of a generation since my own personal days of yore, I would bet your life that this gym still has a cheap record player, too.

The other three judges and I were briefed on the scoring protocol, and then we took our seats at the head of the room. We stared out at all the nervous, anxious, antsy faces whose hopes and dreams we were about to dash.

But enough about the parents. The kids, whom we were already judging the moment they marched through the door, appeared absolutely composed. They were calm and smiling. They were willing to link arms with other actual fifth-graders. They wore clothing that required dry-cleaning.

Then they actually started dancing, to actual music stored using modern technology and lacking any choreographed calls whatsoever. They danced waltz and swing. They danced tango and merengue. They held roses between their teeth, and they finished with flourishes, and they didn’t faint from having 200 people and four judges breathing down their necks.

Dare I say it? They were actually entertaining. They performed the steps to each of these dances more rhythmically and accurately than any adults I’ve seen, and I presume they weren’t even aided by alcohol. Watching them

made me wish, for the first time in my life, that I could go back to being 11 years old just so I could start taking dance seriously as an art form with the capacity to enrich my life at that age. Perhaps young me could even find inner stillness through the meditative movement of dance.

And then I remembered that I was there to score the little boogers. So I scribbled down some fours and some fives, and they should all feel lucky to receive hastily pencil-scribbled comments from such a fine local dignitary. Unfortunately, not every child can win. But next year, now that everybody knows who I am, they can offer me bribes.