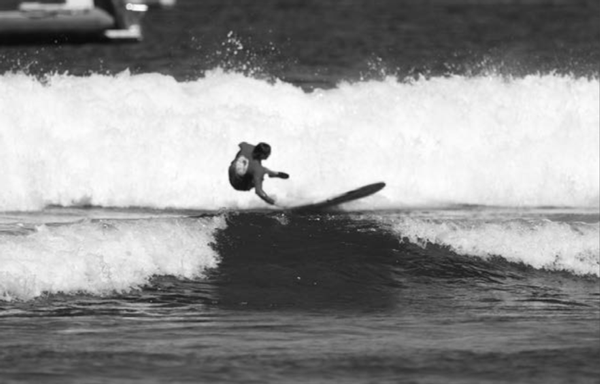 I should have known better, but I had an itch.

My dear grandmother, who is 91 years old, decided to take the family to Maui for a once-in-a-lifetime vacation. And about 48 hours into that vaca- tion, I discovered there was some climbing nearby. So, of course I had to make a plan to get there and check it out.

My girlfriend, Amber, and I decided not to rent a car since several others in our family had. So, like the time before I got a drivers license, I had to rely on Mom and Dad for a ride. And since my grandma is adventurous, she came along too. Soon enough just about everyone in our 13 person family unit was going to this beach just so I could go climbing.

The “climbing” ended up being a cliff- jumping spot with only a minimal amount of rock, and cliff jumpers leap- ing off, one by one, minute by minute. The whole thing was a bust, as my inner voice told me, “You’re in Hawaii, you should be surfing!”

The best part of having a 91-year-old grandmother, who is very much still active and lucid, is the stories she tells. I feel like every time I see her, I get an important part of my family history. Last summer, I learned that my grandfather, who died when I was a teen-ager, had received a Purple Heart in World War II. I also learned that he was a skilled typist when such a skill was rare, and after he was shot in the war, he was sent back to the States to write discharges for other soldiers, until the war ended and he was discharged.

Little details like that about my grandfather’s life are sacred to me. Most of my memories of my Grandfather are from when we’d visit him in the nursing home. World War II seems like the distant past until grandma starts telling stories about it; stories about the first 16-year-old from her hometown to die in the war, and when we dropped the atomic bomb on Hiroshima.

This time, as we sat in our vacation house, she started telling more sto- ries from that time period, and why, in fact she’d always wanted to take a trip to Hawaii. It turns out my grandfather was supposed to take a trip there with his family, and just before they were supposed to leave, his father suf- fered a stroke, and they never got to take the trip. So this trip we were on was redemption for that, and plus, she told me, she had saved the money from my grandfather’s pension – he was a music teacher in the suburbs of Chicago – to pay for our trip.

Then she started telling me a little about grandpa’s dad, who was a World War I veteran, and she mentioned that my grandpa’s brother was against war and had written a thesis on Gandhi and his use of nonviolence. This did not make my great grandfather happy. It does make me want to know more about my grandfather’s brother, Howard, who is still alive and has kept his beliefs about nonviolence all these years.

We did a lot of the tourist things one does in Maui – luaus, tropical drinks, sunset cruises, snorkeling, hikes on the beach, lying around the pool – but up until the last day I’d yet to get on a surfboard; something I really wanted to do. I’ve surfed twice before, but never really learned any technique. My grandma sealed the deal by saying she’d pay for some lessons.

We booked the lessons online, and when we showed up, no one was at the shop. Fortunately, just two doors down was another surf shop, and we were able to get a lesson from them. The surf instructors reminded me of climbing bums – instead of living for the climb, they were living for the wave. Our instructor guided us down to the beach, over-stoking about how the surf had just improved and conditions were getting really good.

I am as scared of surfing as I was of climbing when I first started. I’m not natu- rally a water person, and I’ve made it a habit to only do outdoor sports where I feel comfortable with the risk. As I looked around the beach, I couldn’t help but no- tice the group of 30 groms getting ready for the same waves we were about to face.

We floundered about on small waves with our instructor, who was super patient, as I mostly failed to follow the simple in- structions about how to stand up and ride the wave. After an hour, he challenged us to swim out past the masses of people in the beginner waves. I was terrified but wanted to at least chal- lenge myself a little. After what seemed like a half hour of getting pushed back by waves and trying to swim out to my instructor, I was finally ready. He cautioned me to stay calm, remember my posture and just enjoy the peacefulness of it.

As the wave approached, I felt a primal fear but managed to relax and stay on the board for a few seconds before I fell off, crashing down with the wave and then getting thrown about like I was in a washing machine. But, damn, there was a moment of transcendence and magic, and I had a vision of why people like my instructor dedicate their lives to surfing. As I crashed and realized all was OK, I heard my instructor encouraging me to swim back for one more, but I pretended I didn’t hear him, and headed back to the shores of safety.