I pulled into the motel parking lot, shut off my engine and chanced a closer look around without stepping out of the truck. From a distance the motel appeared as if the place might earn a three star rating. Nope, I concluded. Definitely two stars, and I still had no idea what a room might look like.

Many travelers would have started to accelerate down the road. But I got out of the truck and walked toward the office. The “vacancy” sign sputtered like the burner on an old gas stove, and I was warmed by the thought that the place at least still had its electricity turned on. The lobby stood unlocked but empty. I approached the check-in desk and tapped the bell. A slightly disheveled woman emerged from behind a beaded curtain.

“Do you have a room for the night?”

A rhetorical question. Of course she had a room. The motel contained nearly 50 rooms with only five vehicles in the parking lot. For handing her my credit card I would be given a key to open a door leading to a few basic amenities. 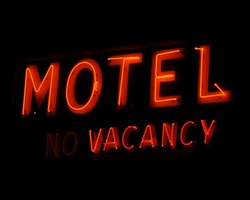 My trip from Cortez formed an awkward circle, over Wolf Creek Pass then overnight stops in Alamosa and Trinidad, across the New Mexico border with a stay in Taos, then back home. Scenery so exquisite it wouldn’t all fit into my camera, but the memory of my motel accommodations left me wondering if I should tell someone about this road experiment. Every time I brought up the subject of my recent lodgings at sleazy motels, my wife feigned a mental rash and ran out the room.

The better lodgings these days line themselves up like dominos on the outskirts, along highways that lean toward but hesitate to actually locate themselves at the spot where business once thrived. I’d decided before I left home that I wanted to stay in the old town centers whenever I could, where the nightlife was once lively but perhaps not so much anymore. In megalopolis America, historic city centers often receive attention and revitalization, but in small town Colorado, main streets have been left to harbor a slightly seedy appearance.

I didn’t know, for instance, that bedbugs inhabit some of these dives, not until I returned home and discovered a bedbug registry internet site while attempting to research a few historic details concerning one of my motel stops. The site invites users to search for motels by name or location.

Of my three overnight beds, two offered me the comforting assurance that “There are no bedbug encounters on record for this address.” Distracted by the knowledge that I lodged at one motel where these under-cover squatters hung out, I spent the next half hour looking up pictures of bedbugs and forgetting about my original search for historic landmark photographs. If you haven’t seen a bedbug on a magnified computer screen shot, you owe yourself an encounter.

Luckily, no bedbugs surfaced at my home, in my luggage or on my person, so I don’t have anything to report, but I feel obligated to continue by mentioning a few other irregularities from my motel road trip.

One eye-opener involved a swimming pool – its gate securely locked, I should add – filled to the brim with stagnant water so green and thick with algae it surprised me that frogs weren’t croaking from king and queen-sized lily pads. This pool hadn’t been used in years, a piece of history soured perhaps by some great loss, like the jilted Miss Havisham, whose mansion rotted from the inside out in Charles Dickens’ novel Great Expectations.

Another curiosity – and it ticked me off a bit – involved clocks, or rather, the complete lack of them. Not one of my three motels offered even a cheap plastic portal into time. Without a doubt, the motels themselves were time capsules, and while showering I couldn’t stop singing Chicago’s lyrics, “Does anybody really know what time it is? Does anybody really care?” Obviously not. Perhaps the type of guests who stay at places like these steal anything not nailed down, but then I asked myself, “So why are you staying here?” I glanced around the room, taking inventory, but nothing appeared all that temptimg.

My next road trip might involve just a tent or an exposed patch of night sky above a swaying hammock. Spiders and ants. A gob of tree sap or bird shit in my hair. I’m still welcome at the motels where I stayed, because I didn’t complain or post any two star internet reviews. After all, even the universe is deteriorating, one star at a time.