Oh, what a relief it isn't! 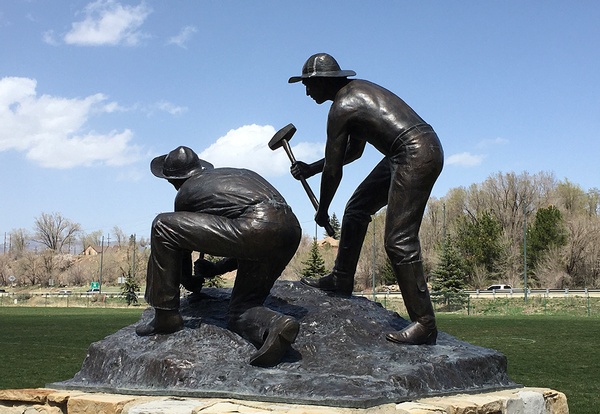 With two doctor appointments scheduled five hours apart in Durango – 50 miles from my home –I decided to use Santa Rita Park as my waiting room. It’s located right beside the melodious Animas River, equidistant from both medical offices. As I pulled into the parking lot, a coveted spot in the shade opened up. I eased into it, slick as slipping into a pair of silk pajamas, lowered the windows, and reclined into a comfortable napping position.

A disagreeable breeze forced me to sit up. I wondered if I’d parked on a decaying mound of picnic garbage until I remembered this park is also home to the Santa Rita Water Reclamation Facility, so I settled back down. The SRWRF’s name, cleaned up from “Wastewater Treatment,” sounds more sparkly. I may get in trouble for mentioning this like I did when I referred to my own county landfill as a “dump,” but the SRWRF processes sewage, which is also an indispensable feature in a city where 19,000 residents plus droves of tourists who travel through leave their “calling cards” every day, which is also another way of not calling a turd a turd.

Obviously, I couldn’t sleep, because I also had to find a toilet.

My brain summoned up a memory of a bathroom at the old visitor center building, thinking the facility might have reopened after being “temporarily” closed and relocated many years ago during the sewage plant’s first phase of reconstruction. Unfortunately, the door remained locked, the windows blocked. A sign taped to the glass declared “Public restrooms are now available on the exterior of the Santa Rita Water Reclamation Facility Administration building adjacent to White Water Park.”

I walked in that direction and found an aesthetically rusted rugged steel outdoor bathroom clearly identifying its men’s and women’s entrances. I went inside, both sides actually, because the entire structure was deserted, and not just by park enthusiasts. Inside I found no toilets, no sinks, no plumbing, no anything except blank walls and empty stalls. I stepped back into the sunshine.

Nearer the sewage plant a sign declared “RV Dump Closed; In Case of Emergency Call... .” Well, I wasn’t experiencing an emergency, not yet, and I didn’t drive an RV, but I appreciated the note. Nevertheless, I had a mission, so I continued snooping around, hoping to discover one of those rentable Tardis-shaped toilets sheltered perhaps beneath a shady stand of trees. Even in these COVID days, a park that remains open to the public ought to provide some kind of privy.

I walked a wide arc along the perimeter, but couldn’t find one. I noticed the playground had none, likely because most of the children wore diapers. I noticed the Pick-up-after-your-dog stations were fully supplied with plastic bags, but hardly appropriate for two-legged beasts like me. I walked over to ask one of the flower garden spring cleaning volunteers if she knew where the toilet was located. She shrugged, said she didn’t think the park had one anymore.

Oh, the knee-deep irony of it, that on the multiple acres of a $64 million sewage treatment facility with attached recreational grounds where at least 40 other cars had parked with me, a public restroom did not exist.

Then I noticed a truck pull into the park with a green plastic Porta-Potti strapped to its flatbed. It sped off toward the sewage plant and I followed it.

Along the way I paused beside a sculpture of two laborers, one raising a hammer to pound a shank of steel held by his partner into the ground. The plaque beneath it commemorated the historic Durango smelter, but I thought, hmmm ... smelter. A word I should have expected. At that moment the sculpture made me imagine two desperate men digging a latrine.

Eventually I found the toilet delivery truck parked behind the sewage plant’s gate and realized the driver didn’t plan to set up a clean one in the park, but instead to carry out a commercial dump. A larger tanker truck parked nearby had the same plan. Oh, what a relief for them.

I considered giving up my shady parking spot and driving to a convenience store where the insurmountable task of keeping a toilet open during business hours was still possible. The virus is dangerous and all precautions must be considered, but encouraging park people to wander into the bushes along the river is hardly a solution.

Back at the car, I glanced at my watch. Nearly time for my next doctor appointment. Despite arriving early, at least I’d have the opportunity after checking in to ask that important question: Where’s the bathroom? My mask might muffle my question for the receptionist, but at least my body language ought to explain my state of mind.