One more Creeksgiving
Replenishing the dirtbag soul with an older, wiser return to the desert 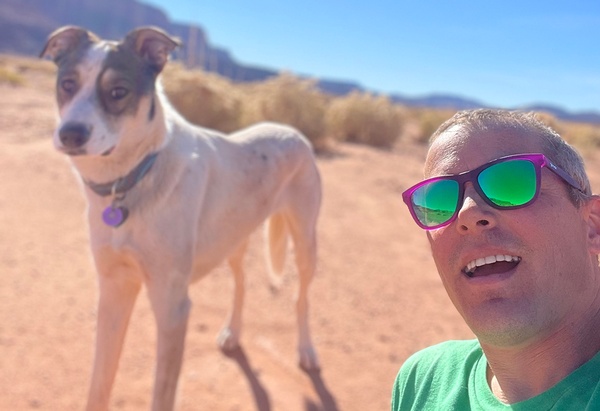 Once upon a time, my crew was wild AF. And that wildness would often come to a climax on Thanksgiving, out in Indian Creek, which is now included in Bears Ears National Monument.

We would call it “Creeksgiving,” one last extended stay out in The Creek, before old man winter came along. We’d have dance-offs, running races, turkeys cooked in dirt pits and copious amounts of substances. It was a blast.

As one could imagine, as I’ve grown older, and into my 40s, my friends are settling down. I feel like I could write a climber version of that country song, “all my rowdy friends have settled down … nobody wants to get drunk and get loud.”

And neither do I. Partying too much affects the physical activities I love like running, biking and climbing. Plus, I’m still at the height of my climbing – biking and running not so much – and I want to see how good I can get before the inevitable decline of mortality that we all face. To give anything less than the best is to sacrifice the gift, right?

But I still like to party, and, even more importantly, I want to keep my community together. The ’rona has really messed up a lot of community-related things I took for granted, and Creeksgiving is one of those things.

I haven’t been out for Creeksgiving for a number of years; a couple years because of family obligations, one year because of a winter storm and last year because of the pandemic. This year, I wasn’t quite sure what I was going to do for Thanksgiving, but after a couple friends texted me that they were headed out, I decided to join them.

In the back of my mind, I was worried there would only be a couple of us. Most of my friends have young kids, or don’t want to suffer out in the cold of those chilly November nights in the high desert. I reassured myself that even if there were just a couple of us, we would still have a great time and eat well. Plus, I was due for a digital detox from staring at my phone and computer; a necessary evil as a writer, podcaster and publisher.

We’ve had many traditions over the years, from silly camp games to hip-hop dance offs, but there is one that holds a very important place in my heart. And that is a run we’ve done for years called the “Turkey Shooter.” It’s an informal half marathon, plus climb of a desert tower, the South Six Shooter, one of the most popular and “easy” towers in the Southwest. Since our crew this year was a small fraction of what it once was, I thought it might be only my buddy Dave and I who would want to do it.

The “Turkey Shooter” is especially important to us, because it is a tribute to our friend Adam Lawton, who died in an avalanche almost a decade ago. The last moments I spent with him were in 2011, the second year we did “The Shooter.” It was the only year he did the run, but he was overcome with excitement and stoke, so much so that he said, “this is America’s greatest footrace!”

So in 2012 and every time we’ve done the run since, it’s been dedicated to Adam. This year, even if it was just me and Dave, we were committed to at least some sort of run to the South Six Shooter, to pay proper tribute to our dear friend, who I still cry tears for. He was just that kind of person, one you miss for the rest of your life.

The morning of Thanksgiving, I woke up at our favorite campsite, miles down a dirt road, away from the crowds, and I missed my friends; the ones who are usually there but weren’t this time. There was a feeling of sadness, but right behind that feeling was something else. In addition to the few longtime friends who made it, there were many other casual acquaintances – most of them from Telluride – and several of them wanted to do the run. We decided to do it not as a race, but a group run.

We started off, questing on the soft sand, moving with intention, and a few miles in, that old reliable runners’ high kicked in. I took a break midway, as I had my dog Hope with me and didn’t want her to run too much that day. (Fortunately, Hope’s favorite place in the world is also mine.)

Later, reunited with my fellow runners, we found ourselves at the base of the tower. We didn’t climb it this year, and with all the other climbers who were on it, we were content to just tag the tower and run back to camp.

Adam Lawton was always the connector, always trying to mix new friends with old. The older you get, the harder that becomes. I’m committed to it, though. I’m committed to continuing to build our community that is centered around a deep love and commitment to the outdoors.

We ran back to camp as a group – just six of us, but six people that shared a journey. Back at camp, more folks from the Telluride crew had shown up. Some asked about the tradition of the run, and we told them about Adam and all the others who contributed to the tradition in the past. That night, we had the best feast I’ve eaten in years, and we all got to know each other a little better around the campfire and the croquet set.

I’ve spent as much time in The Creek this year as ever before. And at the end, I had a nagging finger injury and felt like I’d given everything I had to the place. I left it all on the court, as they say. I couldn’t imagine it any other way.

And as I drove out later that weekend, my eyes filled with tears – not just for what is gone, but for how much is still here in this land of Bears Ears National Monument.

– Luke Mehall is the publisher of The Climbing Zine and host of the Dirtbag State of Mind podcast. Find more of his work at climbingzine.com