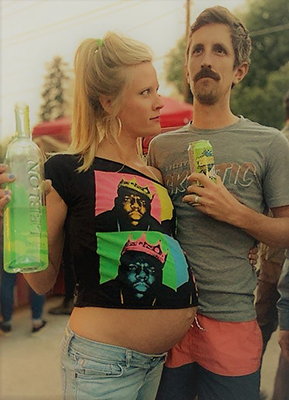 “I’ve never seen so many pregnant bellies at a wedding,” proclaimed one poofy-haired, lip-sticked aunt I’d never met as I waddled by on my 11th trip to the bathroom that evening. I smiled, yelling over the music into her ear, “That’s because we planned it. We call it Operation Insemination. All of us pulled the goalie around the same time and everybody got knocked up!” And then I waltzed off to the chamber, feeling her puzzled gaze hanging behind me.

To the hundreds of similar comments we’ve received over the last few months, I’d usually just reply, “It was a long winter,” tossing in a wink. And while it was a long winter full of fireside canoodling, the cheeky, unabridged explanation behind four good friends getting pregnant within a month of each other can be credited to a hairbrained venture we call Operation Insemination, a highly improbable, slightly weird, wildly successful campaign to start our families around the same time.

The logic behind Op In is simple: we wouldn’t have to change friend groups when people announced they were pregnant; we could all just try to have babies at the same time. The first baby popped out in April 2018, followed by one in August, another in January and two more in March. The second wave is more of a tsunami, with four of us due, like, right now (in fact, the first baby dropped the day after that wedding with the befuddled aunt last weekend).

When Operation Insemination was first conceived over beers back in summer 2015, my husband, Nick, and I were still proudly comfortable in a kid-free-life philosophy. We don’t like babies or teen-agers (seven- to nine-year-olds are OK). And then, one night, Nick jumped ship, suggesting that when we’re 60, we’d regret it if we hadn’t at least tried. He was right. We had to try. But not yet.

In January 2017, we won the coveted permit for a private Colorado River trip through Grand Canyon. Launch date: Aug. 2, 2018. For us, this was not only the trip of a lifetime but would also take us to the place where we met guiding back in 2010, where our love first bloomed, below gaping Redwall Limestone beside the turquoise blue waters of Havasu Creek. Operation Insemination could clearly not happen till the Canyon.

Not everyone had the same hellbent attachment to this timeless adventure, much less the patience to calm their biological clocks, so we weren’t surprised when one baby’s arrival date was announced as Aug. 2, 2018, same as the day we’d embark on our journey into the unknown. Good for them, but we were sticking to the plan of detonating Op In on the river.

After so many years of avoiding getting pregnant at all costs, the trying revealed itself to be exhilarating. Sandy, and not the most sanitary, but absolutely thrilling. And while a booze-and-boomer fueled three weeks works for some, it was obvious that my womb was far from the purified temple necessary to spawn our offspring. It would’ve made for a great story, but we were relieved, and off to the races, stoked on more trying.

Meanwhile, down in the Canyon, I’d re-torn my ACL and took the PLC and meniscus with it, a quiet suffering that I didn’t deal with till December. Considering it’d be my fourth knee surgery, I decided to go to the Steadman Clinic in Vail where  the doc told me I needed not one but two surgeries. The first would be a bone graft, which we scheduled for February 20, 2019. My focus turned from Operation Insemination to Operation Get Knee to Ski.

We kept trying, mind you. I was even using ovulation strips to see if we could nail when the egg would drop, but the strips never showed positive. I assumed my body and mind were so focused on my lack of stability and inability to ski powder that there was no space for carrying a baby.

I’d be in Vail for 10 days post-operation, so work and family were fully aware of our situation. The day before surgery, we awoke to pack for the trip and make the six-hour drive north. I was two days late and knew they’d test for pregnancy in pre-op. We just happened to have two First Responses given to us from already-knocked-up friends, so I unwrapped my first ever pregnancy test, peed on it, waited and blinked at the result.

The second line showed up pale. What did that mean? We didn’t have the instructions. So I used the other stick. Again, one sharp line, one faded. We got in the hot tub to discuss our options. Fully convinced we were not pregnant, I voted we stay with the plan and start driving. But Nick went to the store and bought one of those tests that read definitively PREGNANT or NOT.

We stood in the bathroom staring at three positive pregnancy tests. Happy tears and hugs came first and then we started the phone calls. First up, my surgeon. Congratulations, he said, but we’re not operating. See you in 2020, he said – when I’ll have an infant, I thought. Nothing to do about it now. Then we called everybody else because everybody knew about the surgery, and, by day’s end, at only four weeks pregnant, everybody knew Operation Insemination was a go for the Martins.

Some quick math traced the conception back to Comicon Snowdown, when I dressed as Captain Yes in my gold one-piece suit, flowing cape and Marie Antoinette wig with twinkly lights laced throughout, controlled by a battery pack in my DIY Yes- plated superhero belt. Combined with the ensuing, Hornitos- soaked month of a hut trip, the White Out fat bike race and a random weekend at Dunton Hot Springs partying with The Killers, I hung my head in shame, realizing this poor kid will be fighting for brain cells his or her (we don’t know the sex) parents couldn’t stand to lose in the first place. But the internet and other girlfriends with healthy children say we’re probably fine. TBD.

Operation Insemination has no ending, for the finish line of pregnancy is really the start line for whatever comes next, a title-less chapter with only one guarantee: we’re not alone in this. We’ve got a village of support, wisdom, hand-me-downs, brothers and sisters, aunts and uncles, and the same old drinking, biking and skiing buddies who make Durango the kind of place we want to raise a kid.

We look forward to storytime, the pumpkin patch, the Polar Express, DEVO, and all the other kid-centric subcultures around town yet to be discovered. Until then, know that we’re grateful for the opportunity to welcome this human into a community we’re proud to call home, and to raise a respectful, kind, creative citizen – maybe the one who will solve the affordable housing or homelessness crises, or the one who will fund solar paneling the train, or the baker of the perfect donut. We wouldn’t be where we are without you, Durango. Well, you and my Yes costume.