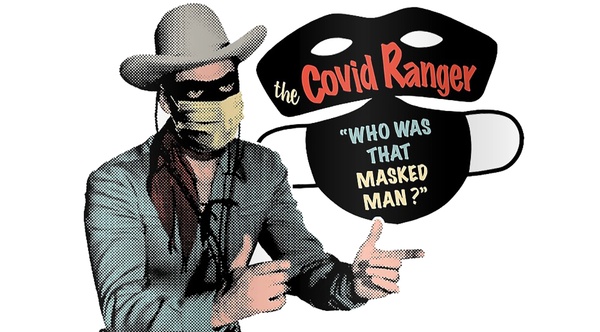 My first encounter with a masked man scared the tonsils right out of me. I was being rolled toward the hospital’s surgery room for a tonsillectomy when a doctor walked up to my gurney to comfort and assure my 5-year-old brain that there was nothing to worry about. I did not believe him. The same goes for those phony glasses Superman wore to supposedly disguise himself as Clark Kent while working at the Daily Planet, and I did not believe the Lone Ranger’s mask ever shielded his identity either, mostly because Tonto kept calling him kemosabe!

It’s no COVIDcidence the habit of wearing masks still goes on around us, even if the pandemic has officially been declared an endemic, like the flu. Of the people I see, most are mask-free. If they’re facing the times heroically, good for them. The possibility of contracting the latest COVID variant is always worrisome for the immunocompromised, but if people are still wearing masks to reduce their risk of coming down with the flu, or even to keep the cold wind off their faces, I say double good for them, because the mask has finally been taken down from its rhetorical pole as a political flag and returned to its practical use as an effective and inexpensive medical defense against a multitude of respiratory ailments ever-present in our crowded social lives.

Lucky, too, that the controversy over our historic mask mandate has noticeably decreased, which doesn’t necessarily mean an enforced awareness was all bad. I have yet to hear of any incident where a mask actually killed an American, unless it was being worn incorrectly, perhaps as a blindfold while driving a motor vehicle.

It’s also no COVIDcidence that new vaccinations continue to appear on the medical market, the latest one serving as a kind of booster seat for the holiday season while those other variants keep knocking at the door, inviting themselves into our homes. By my personal count I have received more vaccinations than I can count: four for COVID, my annual flu shot, shingles prevention, tetanus, pneumococcal polysaccharide, and naturally, all the childhood shots for hepatitis, polio, measles/mumps/rubella, and who-knows-what-else before I reached the age of 18. I am a pincushion of insecurity.

And nothin’ says lovin’ like the holiday marathon of Thanksgiving followed by Christmas followed by the New Year celebrations. Togetherness can give us a cheerful, warm feeling, as long as it’s not accompanied by a fever. Says the CDC, “Because many generations tend to gather to celebrate holidays, the best way to minimize COVID-19 risk and keep your family and friends safer is to get vaccinated if you’re eligible.” Says I, “Yeah, right.” The potential threat of a “dark winter” that may eternally loom before us has gradually softened in my mind from rock to paper. If the scissors show up I will just pound my fist again and take my chances.

Neil Young wrote, “I’ve seen the needle and the damage done,” which might include, “...I often passed out getting jabbed by one.” A doctor once clarified my reaction to needles as a classic demonstration of what’s called “fight-or-flight.” According to Wikipedia, “This response is recognized as the first stage of the general adaptation syndrome that regulates stress responses among vertebrates and other organisms.” And it is gratifying to know that regulation also takes place as an evolutionary directive, not just politically.

On the bright side, since 2020 I wash my hands more frequently and my mother would be proud. My father survived the great Spanish flu invasion of 1918-19 but still suffered emotionally from its impact. He lost his father, two brothers and one sister in the span of 10 tragic days. Neighbors left flowers beside their fence to express a heartfelt collective sympathy. My mother, who was only born in 1919, didn’t contract the flu but she must have absorbed her parents’ worry and precautions, because throughout her adult life she insisted on clean living, healthy eating and a regular bedtime, which included taking a bath at least once a week. Staying safe during times of increased risk might also include the good habits you decided to practice your whole life, not just during a pandemic.

It has been a long time since masks frightened me, but I don’t think I’ll ever grow accustomed to voluntarily having my body needled by another immunization. COVID is a parasite. To survive and spread, all viruses need to find a comfortable access into a host. By simple adaptation they stay healthy. Hopefully we will too. My awareness is evolving, and if I don’t pass out as often, even as the news continues stick me with a steady blitz of stressful headlines about violence and politics, I’ll be grateful by trying to be a responsible inhabitant of this planet.