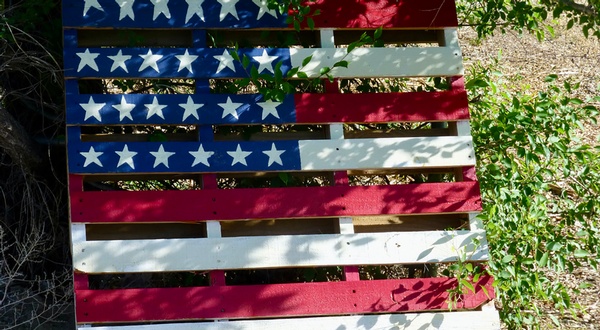 More than a decade of experience as a Boy Scout left me with an indelible respect for our American flag. Not only did I study the protocols for properly displaying it, I also found myself placed in situations where handling the flag in front of an audience made me both proud and nervous. That anxious feeling has recently been resurrected by a proliferation of political messaging that carelessly embraces a semblance of our flag as if it were a megaphone to express a variety of gripes and partisan positioning.

One morning during my walk around the same park where 4th of July fireworks are launched, someone drove past with a homemade message taped to the back of her car: I am ANTIFA. Apparently she really wanted everyone to know. The sign looked remarkably like a homemade cardboard hitchhiker’s destination ticket. As I continued along the sidewalk, I noticed a weedy wooden loading pallet leaning against a telephone post painted up to resemble a flag, but of course it wasn’t a flag. The unwritten message seemed no different to me than the ANTIFA billboard, an insistence that everyone notice “I am PATRIOT.” These two declarations should be able to peacefully live side-by-side in America, but seeing them displayed so close together helped me grasp a problem we have in this country – a consuming passion to declare what “I am” instead of what “we are.”

Our flag used to accomplish that old-fashioned expression of unity for me just fine. And just so you know, it’s completely legit to properly display a flag each and every day according to the Flag Foundation. A calendar of 20 official flag days also exists, holidays of national spirit and celebration like Memorial Day, Independence Day, Veterans Day and even Flag Day, when posting the Stars and Stripes is especially encouraged.

On holidays like these, I display the flag on my porch where it never touches the ground. When it rains I retrieve it, and before dark I always put it away because I don’t care to burn a spotlight all night to illuminate it. But I also don’t attach it to my vehicle and drive around, or stick flag decals on my bumper, or own a set of matching lawn chairs with flag-upholstered seat cushions to cradle my butt. It’s not that I’m ashamed to display the flag more often, but in today’s flag-flapping climate, I don’t want strangers to mistakenly believe the flag also stands for ransacking the U.S. Capitol or the rumor of our former president’s second-coming.

In so many communities like mine, an escalation of what appears to be flag politicization and marketing occurred throughout the 2016 and 2020 election cycles, and it continues to this day. Custom designed allegiances flutter full-time up and down our streets, posters and paraphernalia coupled with the image of an American flag outfitted to express a personalized opinion, as if these folks need to remind those folks that they are Americans of a different ilk than the rest of us.

It’s also disappointing to notice when traditional flag holidays arrive, so few houses actually display a flag. It’s as if our flag has turned into a party banner, elaborately visible at a rally to convince the attendees that our people are against those people.

Our flag was never intended to be a personal commodity but rather an all-encompassing cultural symbol of the experiences and lessons we historically share. The ideals that make us human. It’s far too easy to push aside the harms we inflicted on others during out democratic evolution, when citizens acted out their own little tyrannies of inequality and treated others with malice while wrapping themselves in a patriotic veneer. We do not salute them when we display our flag, and we do not need a separate flag to express that.

For me, perhaps the most disturbing, self-aggrandizing image of our devolving heritage recently emerged when our former president stood on a stage with a big goofy smile for the camera while he wrapped his arms around the American flag, pulling it close to his chest, hugging it as if it were a teddy bear. Don’t get me wrong, people are guaranteed the right to buy a flag and serve as its caretaker, but we all own it. It’s an investment in the future. We are custodians of a tradition that began in this country hundreds of years ago and continues to mature. Any notion of ego and personal agenda has no place on this emblem.

I have a sign on my lawn planted where the steps rise toward the door. It reads, HUMAN*KIND be both. No picture of the flag, no red white and blue background, nothing engineered to strike the firing pin of conflict and division, though I do hope it says something about me to my neighbors. Because I am the product of those who have treated me with kindness, not derision, and from them I have learned how proud I am to be an American.