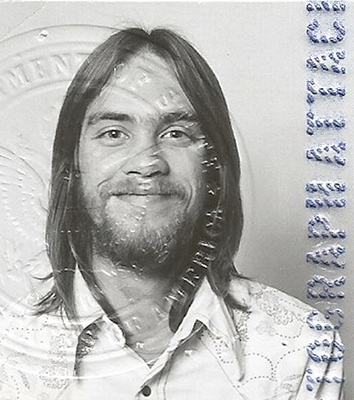 As I reached into my desk drawer to retrieve my recently expired passport, a version of my 1970s self emerged. Before me was a young man I hardly recognized. He had hair down to his shoulders, a poor excuse for a beard, and a silly look on his face. My mother-in-law used to declare he looked just like Jesus, as if she’d formally met the man.

Eventually I found the correct expired passport, then gasped again. This codger staring back at me looked too much like a short-timer, closer than I realized to crossing into that territory where return trips are strictly prohibited.

I’ve held three official U.S. passports, the first one issued in 1979, the second in 1995, and the third one in 2008. They permitted me to travel internationally six times. With these expired documents languishing in my desk drawer, I faced a dilemma. Should I renew?

Renewal is such a tricky word. While it implies a kind of rebirth, it also contains the dregs of fiscal responsibility, like renewing vehicle registration, coughing up more cash for insurance premiums or deciding which magazine subscriptions might get more use in an office waiting room.

Our government collects $145 from first-time applicants, and a mere $110 for renewal, as long as the citizen’s previous passport was issued in the last 15 years. An acceptable photograph is also required, a head shot which most U.S. Post Offices can furnish for an additional $15, even if there’s a chance your face will eventually show up on a stamp.

I’ve tried to submit my own photo but government regulations are very specific. Any variation from over 23 mandates covering size, resolution, pose, expression, background, attire or even the accurate depiction of skin tone can result in rejection. Upon studying the rules, I wondered about the training passport personnel receive to decide if one’s skin tone is accurate and consequently acceptable. Politics these days still prompt questions like these. Once issued, a passport is valid for exactly 10 years.

With my mostly Midwestern miserly ways, I figured I had no option but to renew. Despite being gifted with second-rate math skills, I calculated 10 years of inflation multiplied by the largest national debt in the world divided by my actuary risks of survival would add up to saving a few dollars if  I could ever afford to travel again.

Only one in five Americans retain a passport, preferring interstate to international travel. By letting my passport lapse, I’d be joining the majority of Americans who for one reason or another prefer to stay at home. Granted, the U.S. is huge, with plenty of opportunities for domestic tourism, but as Shakespeare might have phrased it, “All the world’s a stage ... except America, which has remodeled itself into a movie theater.”

Six trips abroad and I felt welcome in every port, airport or station by the people who worked and lived there. In Paris I almost took the wrong train to the Palace of Versailles, the one traveling away from it instead of toward it. Through the combined efforts of a little elderly Parisian lady who spoke no English and a German tourist who spoke just a little we managed to reorient my disorientation.

In Malta a bus driver delayed his departure after shouting at a few impatient passengers to explain how his bus was an individual part of a fleet of vintage buses, all of them owned by locals who spent their own money customizing and decorating them. They qualified as mechanical works of art. I spent the next week trying out various bus routes just to see how creative the Maltese owners could be. Modernization has since reduced the colorful island’s buses to a nondescript example of any city’s strictly reliable and functional transport. Que? sera?, sera?. You’d have to have been there to see it.

When friends narrate their tourist horror stories, I nod my head and try to appear sympathetic, but safety and good luck are not simply products of staying at home. If they were, nobody would ever leave. Something about travel, especially to places you could not have imagined, opens itself to all kinds of pleasure, like sampling new foods, trying to out-grimace a gargoyle, spending money that looks phony as Monopoly cash, or stopping to stare at an architectural masterpiece still standing like a time machine after five centuries, and then getting the chance to step inside.

My new passport photo turned out to be a little glossy just above the forehead, where hair is supposed to grow, so the postal employee readjusted the lighting and took an alternative. He showed me the result and declared it should be acceptable. As a mug shot, I couldn’t complain, but privately I still think it didn’t do my skin tone justice.