Please don't be my neighbor 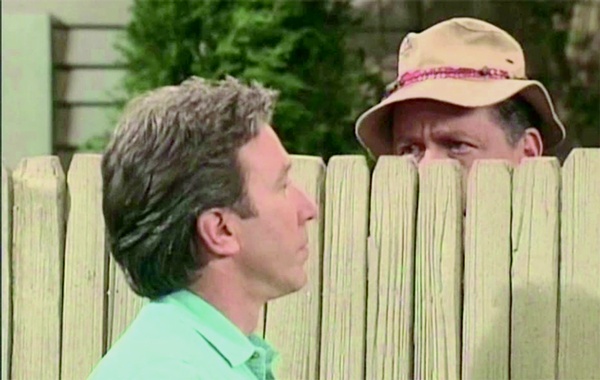 Make no mistake: in the game of dodgeball that is life, we must all choose sides. On one team are the Mr. Rogerses who believe in warmth, kindness, cardigans, generosity, make-believe, empathy and neighborliness. On the other are the Tim “The Tool Man” Taylorses from “Home Improvement,” who believe in power equipment, fences and never meeting their neighbors face to face even after eight broadcast seasons.

I have no doubt in my mind that the best decision here is to vacate the gym and run far, far away from the game of dodgeball that is life. So I did just that. I now live outside of anyplace one might call “town,” where I seldom have the chance to be neighborly, and I’m not getting drawn into any dodgeball matches. Because let’s face it: Mr. Rogers is probably the only human who would choose me for his dodgeball team.

Jerry – whose name I have changed to protect the innocent, which is me – never learned from any PBS show as a child. I have filled my truck three times with the garbage that Jerry dumped around the house before I moved in. I know this garbage is Jerry’s, because Jerry’s garbage included Jerry’s mail. I also know which flavor of ice cream Jerry prefers, how his daughter is doing in algebra, and the viscosity of Jerry’s motor oil.

And I know that Jerry is in fact my neighbor, because he ran me off our dirt road to interrogate me. He rolled down his window and demanded to know my name, my business and the last four of my social.

With good ol’ Freddie R. on my shoulder, I smiled and said, “And who are you, neighbor?”

“I’m Jerry,” he said, thus allowing me to deduce his relationship to the truckloads of garbage. I almost said something about that misdemeanor, but I didn’t, because his truck is compensating WAY more than mine is, and he clearly plays for the more ruthless dodgeball team.

Jerry’s presence pervades the ‘hood. One of his dogs bum-rushes my truck every time I trek to town for supplies, to the point where I really should invest in plastic seat covers. And a juvenile male in Jerry’s household goes screaming through the corner of my land in his Chevrolet Jalopy on the regular, eroding a natural waterway and also making me shout, without irony, to get off my lawn.

That said, Jerry has stopped disposing of his waste around my house. I’m certain he’s now dumping on someone else’s uninhabited land, but not mine. Perhaps we could learn to be neighborly. I would knock on his door to find out, but I’m not certain his dogs won’t eat me.

Last week, Jerry ran me off the shoulder again. He’d loaded his truck down with intact tree segments as wide as my arm is long. I would have required a backhoe to move any one of them. He didn’t remember me, so I told him my mother’s maiden name and the street I grew up on. Then, to foster amiability until he cleared the roadway, I made some innocuous comment about the permitting process for collecting firewood.

“Forest is public land,” Jerry said. “Can’t stop me from using it.”

Goodness knows wildland preservation never stopped the Forest Service from building another road – and I hate senseless rules, when they’re actually senseless – but I flared up at that. That’s not how public lands work! They’re not yours! They’re ours! That tree you cut down is my tree too!

But I didn’t. I said, “Oh,” and the little Mr. Rogers on my shoulder stayed hush. I lit a sage stick when I got home and smudged the ever-loving crap out of the Jerry-ward side of my home, and then I beat myself up for saying nada.

The truth is, I feared retribution. I mean, this man has chainsaws hanging over the entrance to his land. He doesn’t give two raccoon scats about personal boundaries, and he’s transferring these attitudes to the next generation of children and dogs. If we came to blows over firewood collection, it’s my word against his out here, and in this game of dodgeball, only one of us would be left standing to speak.

How can I pipe up for what I know to be right in the face of indifferent might? (Which you know is a deep question because it rhymes.)

The answer I’ve come to? Play a different game.

Mr. Rogers didn’t change the world by getting good at dodgeball. He reimagined the game. I have zero power to change Jerry’s ways. And I don’t need to make him cookies or invite him to Thanksgiving. But I can be a good neighbor to him – picking up what trash blows across the road and not running over his dog. And when someday he finds himself in a bind and comes calling, I know just which ice cream will make him feel better.