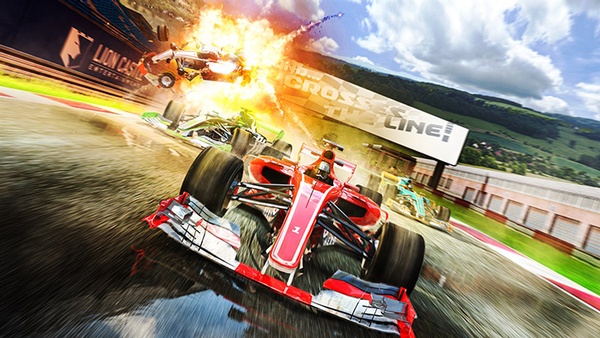 The Grandview “Grand Prix” is a rush hour competition to see who can motor from Highway 3 to Elmore’s Corner the quickest. The important things to know are that: A) you can’t ever “win” this race; B) there’s really no point in trying; and C) if by any chance you did gain a dozen or more car lengths, you’re likely to be the recipient of an “enhanced” ticket from CHP, since this is a designated “Safety Zone.”  The best strategy, as I shall now demonstrate, is simply to pick a lane, either lane, and stay in it.

Scenario #1: Let’s assume you’re in medium traffic as you roll past the light at Home Depot, neither the first away from the light nor tail-gunner Charlie who floored it to make the yellow. Which lane to choose? Let’s say you’re wise to the ways of Farmington Hill and go for the so-called slow lane, expecting a bunch of cars to turn south on 550, allowing you an open lane to pass that jerk in the silver Mustang who cut you off back at Highway 3. You get all excited about passing several cars on the right, only to see a beat-up landscaping truck towing a trailer apparently NOT turning south several car lengths ahead. You lose. The Mustang rolls on past.

Scenario #2.  You decide to stick to the fast lane because there’s invariably an RV or truck towing something that doesn’t turn right onto 550 South. Your Mario Andretti pupils pinpoint at the possibility of accelerating past a dozen or more cars because those morons, err, less-skilled drivers, turning south all have to slow to 30 mph before they scoot over into the deceleration lane for reasons still not fully understood by automotive behaviorists.  You get ready to stomp the gas pedal and then… get stopped by the light at Farmington Hill.

As you sit in the “fast” lane congratulating yourself, a gravel truck belching black smoke pulls out and merges into your lane right as the light changes. He’s doing zero-to-50 in all of two minutes, foiling the most spectacular take-off you would have ever made. Do you swap lanes real fast back to the “slow” lane? Quick, you’ve got five seconds or less to decide – IF there’s an opening.

Nope. Because if you do, someone craving a Big Gulp or “adult beverage” a few cars ahead of you will invariably decide to turn into the Sunoco, failing of course, to signal their intentions, and slowing to a crawl because every bad driver knows you can’t make a right-hand turn without practically coming to a dead stop. But let’s say today you get lucky, and the Sunoco-seeker does use his or her turn signal, and you immediately slide your 5-series BMW (or whatever) back into the “fast” lane. Bad move.  This is where either a car will decide to turn into the powersports center, slowing before getting into the turn lane, or else a dually will pull out of there towing a trailer load of ATVs. Foiled again.

And that’s the way it always goes past the automotive shop, the lumber yard, former KOA – right, left, both sides. It is utterly unpredictable which lane is going to suddenly slow from 10 over the speed limit as every participant in the Grandview Grand Prix is attempting to do down to five faster than I can pedal a bicycle. This is true even if you somehow got lucky enough to not get stopped by the light by the hospital.

There’s a principle at work here, that if by some amazing set of automotive coincidences either lane suddenly was moving 5-10 mph faster than the other and you whipped your car into it, three cars ahead of you will do likewise, forcing someone already in that lane to brake to maintain a reasonable following distance. Foiled again.

The slight grade before Elmore’s Corner provides the last and final challenge to Grand Prix participants: when to slide right if you’re headed toward Ignacio. At this point, ya might as well give up. If you blast past five more cars before turning right, what have you really won? Practically the moment you turn right, you’re in a heavily enforced school zone with a flashing light and a 25 mph limit. And that silver Mustang? Right in front of you despite all your skill from having run the Grandview Grand Prix hundreds of times.

Meanwhile, those who went straight at Elmore’s have to immediately merge after the light. Which lane to choose? Neither is a sure thing. Flip a coin. It all depends on the yo-yo ahead of you, doesn’t it? My advice: Choose whatever lane lets off all their brake lights first. And avoid getting behind minivans in either lane.

I am dead serious. You can change lanes a half dozen, even a dozen times passing through Grandview at rush hour, and your chances of getting more than three cars ahead of where you started are next to zero. My suggestion:  Give up. Pick a lane. Relax. The only race you can win is the one against high blood pressure. Rapidly changing lanes always comes with the risk of colliding with someone in your blind spot.  Or knocking a motorcycle into Kingdom Come. It ain’t worth it. Crank up some good tunes and … breathe.

The “Grandview Grand Prix” is only one of several “races” you can’t win in Southern Colorado. My second favorite is where 160 briefly goes to three lanes coming into Pagosa, then rapidly drops to 45 mph. I’ve literally seen drivers doing 80, 90 mph only to end up crawling past City Market five car lengths ahead of all the slow movers they passed in the “Pagosa Indycar Area.” Where’s the payoff from THAT? There is none, my friend. Slow down, relax.

For those of you who remain determined to win the Grandview Grand Prix allow me to remind you again this stretch of 160 is a designated “Safety Corridor” which means your speeding ticket will cost you at least double. The only way you can get a ticket, however, is if by some miracle or skill of lane selection you DO manage to zoom ahead of the entire pack, leaving a big enough gap behind you for the eagle-eye trooper to jump in directly behind you. Busted!