Postcards from the edge 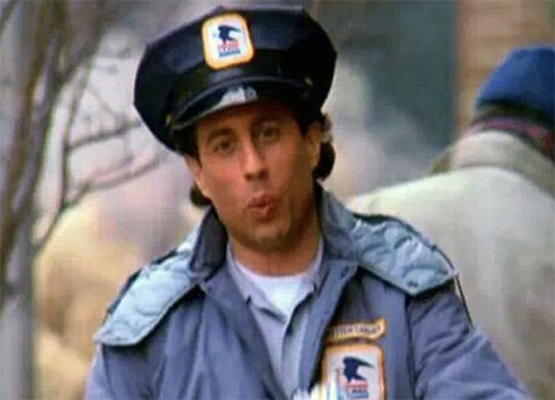 Luke Mehall - 08/06/2020
I’m going to try hard to focus while writing this one. Outside my writing window is some major construction – they are improving the sidewalks here for the kiddos to walk to school – but in the meantime its f***ing up my writing game. You see I am the so-called ADHD type. I need absolute silence to focus, while simultaneously having the option to be distracted by my own means.
A greater concern than my ability to focus, is my income and our right to vote. And right now, POTUS, via the United States Postal Service, is f***ing up both of those.
If you’re a Seinfeld fan like me, you remember Jerry’s nemesis, Newman. (Fun fact: my dad’s cousin played the farmer girl Newman hooked up with in the can-recycling-gone-wrong episode.) Anywho, in one episode Jerry has to deliver the mail for Newman and ends up delivering all of it, to which Newman replied, “No one has ever cracked the 50 percent rate of mail delivery, it’s like the 3-minute mile.”
Now that’s an exaggeration of course, but there’s some definite truth in that, something I can verify from my last 10 years of shipping through the USPS. The truth is they do lose a lot of packages. The USPS is constantly underfunded, and what makes it worse is that their insurance program is basically worthless. I’ve lost thousands of dollars in product and I’ve never successfully been able to get any of my money back, despite the fact that I had insurance on the very package that was lost.
My solution to that issue is when I’m sending anything worth more than 50 bucks, I use UPS or FedEx. And guess how many packages UPS or FedEx have lost for me in the last decade? Exactly zero.
I’m not writing this for you to feel sorry for me. I’m writing this for a few reasons: to recommend if you’re shipping something valuable to use UPS or FedEx, and to never EVER buy the USPS insurance option, and because this all connects to our upcoming election.
But first, can I say some nice things about USPS, specifically our local Durango office? Despite my frustrations with delivery, I still use USPS heavily, especially its Media Mail rate because I ship so many books. Basically, I am at the post office shipping things every day. These days I have my own label printing set up through Shopify – something I highly recommend for any business – so I simply drop my packages off and I’m out of there. But for years, I’d wait in line to ship my packages. No matter how big my order was I always got the friendliest of service from the counter workers, and over the years I got to know the ladies who were working. And let me tell you a little secret: the nicer you are to them, the nicer they will be to you, like most people who work in the service industry.
Though I wish Trump had a mute button, it’s impossible to ignore his attacks on mail voting, as well as his sabotage of the USPS. Though this news often gets buried in the headlines, Trump has been on a never-ending Twitter tirade about how mail in voting causes fraud, with zero evidence. He also recently suggested delaying the election – something only Congress can do – but of course that was merely a distraction from his disastrous response to COVID, the terrible state of our economy and high unemployment.
Trump recently named a mega donor of his, Louis DeJoy, the postmaster general, and the USPS has recently stopped paying mail carriers and clerks the overtime necessary to ensure that deliveries can be completed each day. This has led to the delays I’ve seen more and more of recently, and also packages simply not arriving, which has also been more frequent for myself in the last few months.
Like many Coloradoans, I’ve been voting by mail for years. I get my ballot in the mail, but you can also be damn sure I deliver it straight to the ballot box myself. Seems like a straightforward enough system, and that’s exactly what he’s so afraid of. Remember that Trump won by actually receiving less votes than Clinton, as George W. Bush also won that way versus Gore in 2000.
At the least here I’ve proved I can still write some words while the sidewalk is being destroyed and rebuilt. Eventually it will be safer for the kids walking to school in our neighborhood. I’m hoping the same for our country, that after all this destruction and distraction that Trump has caused, we will rebuild, and eventually be better.

Luke Mehall is the publisher of The Climbing Zine, the author of five books, and the host of the Dirtbag State of Mind podcast.