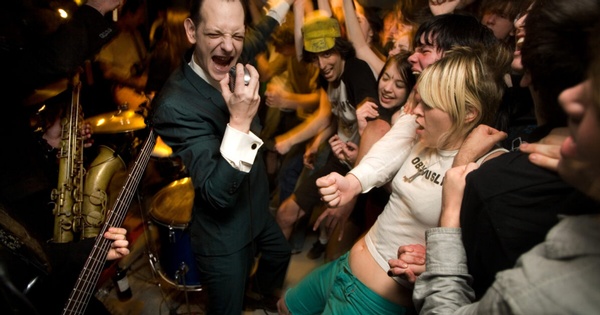 One evening in 2019 in the cozy performance space of Paste Studios, in New York City, Jack Terricloth looked into the camera with a devilish grin and, as a preface to the band’s next song, suavely said, “Everyone has a favorite dead punk rocker. I hope to be yours one day.” The members of his band, The World/Inferno Friendship Society, shook their heads in laughter and then launched into a cathartic Latin jazz-inspired track about the beatnik punk iconoclast, Jeffrey Lee Pierce.

There is now a bittersweet sting in my chest when I re-watch that footage. Because in May, a few days before my birthday and a month before his 51st celebration, Terricloth (real name Peter Ventantonio) took his last breath and left this spinning globe of madness and wonder.

Before more grim headlines pile up on the doorstep, before the party ends, I want to honor and celebrate Terricloth’s legacy – a man whose art, music and ideas have held my heart since youth. The man had such an enigmatic presence that was nearly mythical and cinematic, and it wasn’t just due to his Jack Skellington frame and vocality.

If you’ve ever wondered what an anarchist punk rock cabaret collective would sound like, look no further than The World/Inferno Friendship Society, which Terricloth spearheaded since 1996. The band’s a carnival-esque collective with a carousel of nearly 40 musicians that have collaborated, toured and recorded together in different lineups over the decades. The band’s music breaks down the borders between genres, zigzagging from punk and klezmer, to jazz, opera and soul – oftentimes even in the span of one three-minute song. In every epoch of the band, Terricloth’s electric passions and ideals run rampant through the music and lyrics.

Consider the group’s early full-length album, “The True Story of the Bridgewater Astral League,” which is a hyperkinetic musical story of a group of kids hijacking cars in Bridgewater, N.J., and then selling the cars to Russian mobsters. To accomplish such successful carjackings, the kids credit the use of astral projection. Supposedly this is a true story. Maybe you had to be there at the time.

The illustrator Scott Benson recently created a web comic about the Bridgewater Astral League, in honor of The World/Inferno and Terricloth. In the comic’s introduction, Benson reflects on the record, describing it as a concept album about “teen weirdos” with superpowers and the dangerous recklessness that would ensue, resulting in “their first big heartbreak” in failure and regret. Benson goes on to write, “And as I’m a couple decades removed now from being a teen, that ability to survive the big heartbreaks is something that never becomes less important.”

All throughout the band’s career, its music has celebrated the underdogs, outlaws and oddball outsiders, from Paul Robeson to Peter Lorre – the latter of which the band wrote a whole album about in 2007. Titled “Addicted to Bad Ideas: Peter Lorre’s Twentieth Century,” the album’s 11 tracks archive the actor’s life and career, from leaving Weimar, Germany, as Hitler took power to Lorre’s many memorable performances as various misfits during the Golden Age of Hollywood. When reflecting on Lorre in an interview, Terricloth described him as “a strangely charismatic, extremely creepy person, which I think most punk rockers can identify with,” thereby immortalizing Lorre into the annals of punk rock history.

Along with raising glasses to the misfits and marauders, the band knew when to dance in anarchic joy and when to stomp on the threat of fascism. And that’s what attracted me to the band when I encountered their music as a teen growing up on the Navajo Nation. They added an eclectic sort of fuel to my diet of Noam Chomsky and discordant punk rock. After discovering World/Inferno, what I found refreshing and liberating was not just the explicit desire to confront and smash everything horrible about our current world. There was also an adoring expression in picking up the pieces of history and pop culture schmaltz that they love and holding them up to the light; to sing about the fleeting moments of subversive joy found within.

When Terricloth was on stage, he was often dressed to the nines with a ringmaster aura to his presence, and the same can be said for the many bandmates he shared the stage with. Before the band would play, the audience would already be immersed in the carnival theatrics they would transform the venue into. (To see such manic beauty, look up any live footage for the “Addicted to Bad Ideas” album.) With Terricloth as the ringmaster, the rest of the band members acted as trapeze artists, lion tamers and fire-eaters except with guitars, saxophones and accordions, among other enchanting instruments.

In the context of this cabaret circus show, if you were lucky enough to be in attendance, you would find yourself singing and dancing to songs like, “Only Anarchists are Pretty,” “Let’s Steal Everything” and “Zen and the Art of Breaking Everything.” Along with those, the group has a vibrant catalog filled with many other songs espousing romantic anti-capitalist, anti-fascist ethics. Even on its final 2020 release, “All Borders are Porous to Cats,” Terricloth croons early on, “I have not a country. I am a citizen of jazz.” Such radical sentiments are why I, along with many others, found it instantly easy and comforting to give my heart away to The World/Inferno.

It’s belated, but in the spirit of collective solidarity, this is also a tribute to the many remarkable people we have lost in the last year who were larger than life – those we imagined a coffin couldn’t keep down. To lose such towering figures in life who had so much soul to share, it feels as if you woke up one morning to find the mountains missing.

So here’s to Jack, and everyone like him, gone too soon before the final curtain call. In his life, music and writing, he left behind a kingdom of heaven, and his heart’s a legend to shake the centuries.