Puppy love
Why stop at one when two are twice as fun? 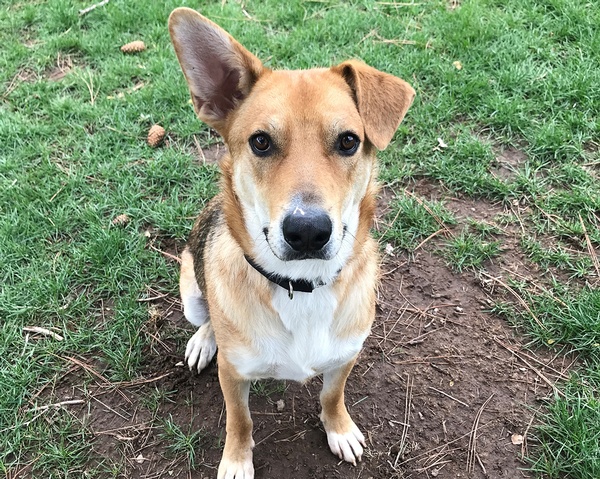 Until recently, Hawkeye and I both felt sprightly for our ages. He is 9 and swam the equivalent of the English Channel this year while chasing tennis balls. I, meanwhile, am as close to 40 as I’ve ever been, but I worked out twice this summer and cut out sugar for an entire meal. So when this particular puppy showed up on my Instagram feed, all I did was like the picture. Hawkeye and I had a good thing going. I wasn’t going to muck it up over some Insta-model.

But when this particular puppy showed up again two months later, I knew he was either unadoptable or meant to be with us. Or both.

Still, I did my due diligence by spending about 12.4 seconds with the dog before deciding for certain to make a lifelong commitment to him. I did not think at the time he was a puppy. I thought he was merely a youthful 70 pounds – thus, the “little” in his name, signified by the diminutive -k sound at the end of Ryzhik, which was given to him by his Russian foster dad without the shelter’s knowledge or consent.

He (the foster dad) fed me much less misinformation than one might expect: Ryzhik does not destroy furniture (this is true). He is great off-leash (true) and comes when you call him (true, except when it’s not), even when there’s a bear on the trail (not yet tested, but dubious). He will pull your clothes out of the laundry basket when you’re away (true) but does not destroy them (true except once; long live the buttons on the Henley). He is a lover (true). And hey wow, you almost pronounced his name correctly (kind, but untrue) – I will send you the audio link on Google Translate (true).

I cannot fault the Russian for the one great lie, however, because he was fed bad intel. Ryzhik might be fully grown; he understands two languages better than I do and can run a 5K without training; yet he is still, as you might guess from the times I said so above, a puppy.

It took both Hawkeye and me until approximately noon that day to acknowledge that we are old men without the exuberance, the spontaneity and the toothiness of a puppy. My parents did not give me a dog of my very own as a child. Sure, I learned the responsibility of feeding their dogs, and cleaning up their dogs’ turds before playing backyard baseball by myself. But I then packed up and went to the other parent’s house for the weekend. I never learned how much energy it takes to wear out a dog-toddler every day of the week without a break – and how much of that energy you lack when that doggler wakes you up with a catcher’s mitt of a paw to the face before sunrise – and just why bathrooms have doors in the first place.

Perhaps I have it easy. I, at least, stand a full 8 inches taller than Ryzhik and can flash a squirt bottle when he forgets not to play tug-of-war with my forearm. Poor Hawkeye is on his level, and Ryzhik often ignores basic dog communication skills like growling, which Hawkeye does a lot because he is a grump. At least they have figured out a game where Hawkeye stands in the center of the yard and growls at Ryzhik like normal, only this time Ryzhik instigates the zoomies, and every time he passes by the center, Hawkeye growls and snaps at him again, and Ryzhik rockets off in another direction. I know this is a game because it has not drawn any blood.

Then we come inside, and after some more attempts to puncture my skin, Ryzhik curls up on the couch and smushes his nose until he wheezes. Hawkeye passes out on the rug for some goddamn well-earned peace and quiet. And me? I freeze, because any errant twitch will ruin the moment. I cherish these gentler times, all the more precious in my advancing years, as a chance to tend to my scratches and look around for my relocated house shoe. Put it all together, and I wouldn’t have it any other way.