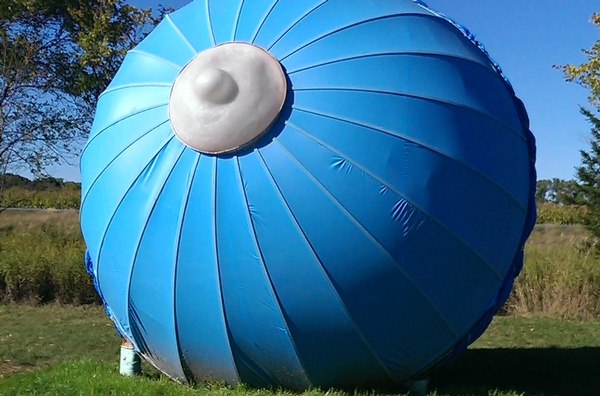 In 2016, the Amsterdam Police were called to an upper story apartment by a community of neighbors who’d expressed concern over a woman in black lingerie standing motionless for hours at a window. It turned out to be an inflated worry, literally, because when the police entered the apartment, the woman in peril turned out to be a blowup doll. Though inquiries were made, her paramour was nowhere to be found, which resolved the worry and perhaps explained why she spent so much time at the window.

A similar experience occurred at a local park festival where a pair of hot air balloons designed to resemble boobs (with fringe) were being inflated. What a spectacle! A crowd of onlookers stood abreast in the park, shading their eyes, waiting to see when they would rise. I glanced toward the police department, which occupies the northwest corner of the park, and noticed a uniformed officer calmly surveying the crowd while other festival participants worked feverishly to prepare their individual balloons for launch, but for some reason, the boobs attracted the most attention.

They say the Constitution guarantees certain freedoms, but it does not hold that all pleasures could or should be created equal. A simple kiss presents a case in point.

From 1930-67, the Motion Picture Production Code officially considered any on-screen kiss indecent if the two actors’ lips touched for more than three seconds. Alfred Hitchcock’s 1946 movie, “Notorious,” tested the censor’s limits and got away with it by filming and splicing a full three minutes of the same lips kissing, all of it while Cary Grant and Ingrid Bergman whispered and nuzzled and flirted and talked and shifted themselves around the patio repeatedly kissing and kissing – even as Grant answered the telephone. I counted more than 20 individual collusions of lips, but no single kiss lasting longer than three seconds. A sexy sequence, for sure, which I was forced to watch at least a half-dozen times just to get a reliable kiss count.

Naturally, it’s the softer habits that emphasize the pleasures, like camping on the couch while binging a seven-season dramatic series, or gorging on a gallon of ice cream, all because indulgence sometimes seems to help us get through a stressful time. In reality, it’s all a conspiracy of goodwill chemicals released by the body – dopamine, endorphins, oxytocin and serotonin, to name a few – that camouflage the will to question what might be easily questionable, like... Should I stay up all night and skip going to work tomorrow?... or... Do I want to risk the lactose overload and spend the next 30 minutes on the toilet with an uncomfortable case of cramps and diarrhea?

Then again, the line between pleasurable and the questionable blurs as one’s behavior drifts toward more public encounters. Many online gamers, for instance, find pleasure in online challenges, such as those advertised by y8.com: “If you are a professional killer or just a hired gun, then you will enjoy the multitudes of possibilities you will find in the killing game category. Work through your violent tendencies by enjoying these gruesome games.” It’s not as if this online site is the only promoter of the carnage entertainment industry. Rather, it’s the notion that working through one’s violent tendencies serves as a redemption for participating in the onslaught of a few virtual killing sprees. It all harkens back to how the North American Plains Indians traditionally proved their bravery by counting coup, but now we wield a joystick instead of a coup stick, an option today’s gangbangers and mass reality shooters ought to try.

Surely the last way to look at what’s questionable must be composed of the purely objectionable pleasures, which of course are those pursuits deemed illegal. Catching up with the news offers anyone a generous list of examples, like bilking people out of their hard-earned money, sexual abuse, cruelty to animals, murdering a girlfriend, inciting violence or reducing the cities of an entire nation to rubble under the flag of national aggression. An obvious objection to such an interpretation might suggest that these examples canNOT by any stretch of the imagination be considered pleasures, but unfortunately, even in the most horrendous situations, psychiatrists and neurologists confirm that dangerous and even criminal behaviors can stimulate adrenaline and ignite some kind of euphoric rush. One person’s pleasure may indeed be another person’s pain.

And finally, it may also be that pleasure is overrated. Socrates actually opted for death instead of exile at his trial, and in making that choice he defended the principle of inquiry. He said, “The unexamined life is not worth living,” or, as his sentiment might be paraphrased for even these treacherous times: an unexamined pleasure is rarely worth wallowing in.