When the telephone rang, I listened to my answering machine. A “holiday change of schedule” announcement from my new trash service was being dumped there by a recorded voice. The week before, my old company sent me a letter letting its customers know it had been purchased by a competitor, the county’s other trash talker. Now the survivor essentially holds a monopoly in our little county, and its business, according to its website, is picking up in 15 states.

I deleted the message and phoned a representative, not located in Montezuma County but in Texas. Without competition I suspected there’d be an inevitable rate increase sooner than later. My old garbage service had given me a bottom-of-the-pit price, because it had a billing structure permitting customers who don’t produce large quantities of weekly trash to provide their own smaller receptacles instead of using the Darlecs the company usually drops off with every new contract. I asked if my new billing would reflect my old rate. A soft-spoken gentleman said he would dig up my account. 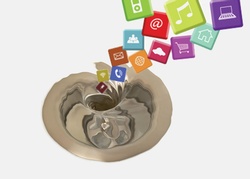 Waiting, I listened to some music that sounded a bit like a backhoe bucket being scraped along a stone cliff.

“Thank you for your patience,” the spokesman said. “What is your question?”

I explained the situation on my road, the negotiated smaller capacity bin I had been using curbside, and I hoped the new corporation would allow me to continue with it.

“But will I be paying the regular rate assessed by your service, as if I’m using the larger corporate container?

“I’ll check on that. Could I put you on hold for just another minute?” Then more heavy metal music.

“It appears your charges and billing cycle will remain the same. In fact, I shouldn’t be telling you this, but if you were a new customer, I wouldn’t be able to offer you this rate.”

I thanked the representative and hung up, but a dilemma remains parked at the end of my mental driveway. Who owns those details about my disposable life, the company that sold me or the corporation that bought me? Maybe it doesn’t matter to either company. My personal data just gets collected like the weekly trash.

The recent Equifax fiasco turns out to be mind-boggling because most of those affected by the data breach were involuntary customers. They were acquired, like me, by second-party affiliations. The threat of my stolen data being used by criminals against me apparently comes with every corporate shift, takeover or realignment in the never-ending struggle for dominance and control of the consumer market.

We exist in a subconscious world of business-as-usual customer service, requiring clients to sign off on any number of questionable practices, ones that many companies deem necessary to augment their bottom line, like buried contract clauses obscured by stilted language: “...including without limitation to the party of the first bozo who agrees to digitally not complain about the pile of fecal exclamations enumerated at the bottom of the aforementioned corporate biomass.” Common practices, legal sleight-of-hand, crafted for the corporation’s convenience.

Of course, it’s always the customer’s choice, but that doesn’t translate into transparency. Too many times I have checked the “I agree” box without reading the accompanying 20-page document because it really amounts to the same ultimatum, take it or leave it, which like my garbage container always stinks, even after it’s been emptied.

Data mining is a peek into another corporate excavation, further undermining our personal choices. It’s an approved practice for online vendors to act as digital trash collectors, gathering our discarded internet searches and using them and/or selling them to the highest bidder. I never realized it but as a general rule, the contents of my actual garbage can is available to my neighbors to take home. A 1988 U.S. Supreme Court ruled that “the 4th Amendment does not prohibit warrantless search and seizure of garbage which has been left for collection outside the curtilage of a home.” I wonder if the ruling holds true when I leave mine at the curbilage.

Luck is the thread we all hang by, the notion that if we cross our fingers and try not to step on the sidewalk cracks, we’ll be spared. We’re small potatoes, we rationalize, as we dump our peelings into the disposal’s steel blades of oblivion. If only it were that simple, a data disposal unit at the bottom of our sinks, where we could listen with satisfaction to the sound of every insecurity being pulverized into a disgusting pulp. And when that mass of information leaves our house we could be certain nobody wants to touch it.