RBG and the 'f' word 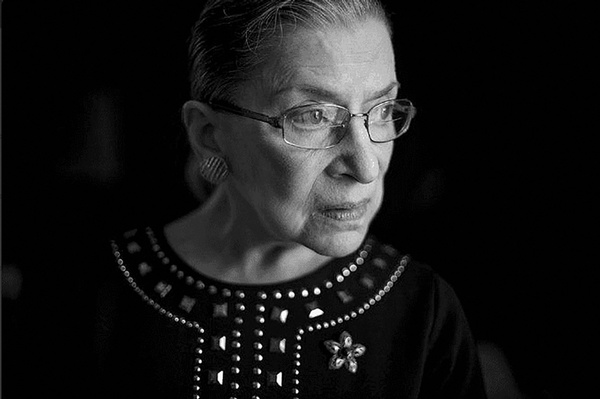 I listened to them talk about my project until I unmuted myself to try to speak on my behalf and when I tried, the men continued to talk over me and make a couple jokes until my stuttering and hand-raising just became background noise and my Zoom window faded out and off the screen.

When I thought I’d disappeared completely, I started to put my hair up into that perfect messy COVID-stylish bun and that’s when, for the first time I heard my name and finally all eyes were on me.

“Look, we can all watch her fix her hair!” one of them said. Then they laughed and laughed and waited for my expected encouraging response which was, unspokenly, meant to entertain them.

The best I could do was give a thumbs up which made the men laugh even more and then I waited for them to finish so we could wrap up the meeting and I could start being productive again.

When my screen went black after the call, I was trying not to get mad. I couldn’t be mad because of all the four men, I would put my money on it that they’d all identify as being feminists. Or at least, if they were up against a firing squad they would swear to heaven and hell that men and women should have an equal voice in all Zoom meetings. I’d guarantee that they’d step up to the guillotine plate, maybe without the weighted label of “feminist,” but they would tell the executors that they thought I, too, as a woman, deserved a chance. I really believe they would, but instead, in one way or another, they muted me.

A few days after yet another man-jority muted Zoom call, the Honorable Justice Ruth Bader Ginsburg died, and I just crumbled. I cracked and shattered. Everything in my heart and soul hurt and I was sad and terrified all at the same time. It’s actually amazing how someone you don’t know can affect you so deeply, but when she died it felt like she was the last and only person on this Earth who was able to crawl into my computer and hit that “unmute” button on the man-jority Zoom meetings. The last person who could have said, “excuse me gentlemen, please stop noticing her hair and listen to what she has to say.”

Please shut up and let her talk. Listen to her thoughts and ideas and stop noticing her hair and gender. Listen to her needs and rights. Please stop citing your religion and instead, cite her body as her own. Take note of her and her situation and her life and make it just a little bit easier by not forcing it down. Make it mean something; make it matter.

RBG had the ability to turn the words and pleas that have been spoken over and over by women – words that have beaten the dead horse – and she made the words matter. She sat, shoulder to shoulder, face to face with the men who wanted to mute her, and she smiled, ignored their laughter and made laws instead. So when she died in the sea of men, in the hurricane of what is our current political office, my blood ran cold and my hope for feminism grew thin.

The word in itself is triggering, “feminist” – and I guarantee that if I were to put it on my online dating profile I’d lose more potential suitors than the Rump has lost marbles. The word is interchanged with anti-men or angry women; oftentimes both because they go hand in hand.

Apparently, a “feminist” is a woman who hates men and screams about it all the time. A “feminist” takes extreme and sometimes violent actions that can be viewed as “hysterical” and disruptive. A “feminist,” they say is – ironically – very masculine. A “feminist” is loud, stubborn and closed off, but that is not a feminist. None of those things connote a feminist. Those things are just characteristics of some people in an ocean of a lot of different kinds of people.

Being a feminist doesn’t mean that I hate everything that signifies “male,” it actually doesn’t mean that I hate anything. Granted, I’m not too fond of our president, vice president, Mitch McConnell, Kyle Rittenhouse or the guy who stands in front of our local Planned Parenthood every day with a picket sign, but I don’t hate them just because their men. I hate them because they’re racists, murderers and literally running our livelihoods into the burning ground. Also, one of them is trying to stop me from getting affordable female health care. I hate that.

I’m not forcing anyone to be less of a man so I can be more of one. I enjoy wearing skirts and flirting with boys. Some of my favorite nights are snuggling with a glass of wine and popcorn to watch the long list of rom-coms that Netflix recommends to me. I cry when I’m happy, and I squeal when I see a cute puppy. But If I ride my bike faster than a man, have an opinion about anything, or pull the trigger on a joke before a guy does, it doesn’t mean I’m trying to make him feel bad about himself. It simply means that I’m good at riding bikes and I’m funny.

On the day RBG died, we lost a female voice that was listened to and wasn’t muted because she was “challenging” or “intimidating.” No one called her “nasty,” although our president did say she was too small. No one said she was “out of her mind” or called her a “fu**ing b**ch.” No one suggested she “work on her anger management problem, then go to a good old-fashioned movie.” RBG was the kind of feminist that, while the rest of us feminists (men and women) challenge the norm, she hit the unmute button on our country’s Zoom call and said “excuse me gentlemen, we have something to say,” and no one said a thing about her hair.