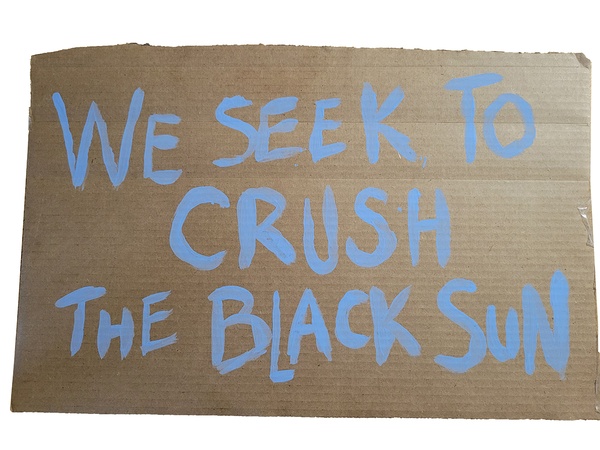 Under the morning’s awning, we poured out into the streets like sunlight. Sipping the receding shade, breathing in the chill of fall, glowing with warmth from the call-and-response slogans that we shout into the sky.

In 1492, a black sun rose over this continent, casting a violent shadow over the cultures and lives of Indigenous peoples who have lived here since time immemorial. Since then, the colonial pen has been trying to narrate our lives, trying to cross out the radical harmony traditionally practiced in our societies, and trying to normalize their murderous desire for conquest and control. In any other story, these thieves, liars and psychopaths would be the villains, yet for centuries, society has accepted and celebrated this history of genocide. But for as long as scribes and court jesters have sought to mindlessly uphold the prevailing order, there has also been a rich history of Indigenous resistance.

Which brings us to the present: even though Indigenous Peoples’ Day has been rightly recognized, this comes at a time when the capitalist death-drive for environmental exploitation continues unabated, while Indigenous land and water protectors face imprisonment by the state; while Indigenous women, girls and two-spirit peoples continue to endure violence in a world that closes its ears; while monuments and symbols of dehumanization continue to be proudly displayed. We have all the right reasons to be out in the streets, celebrating our resilience and moving forward in our resistance. We seek to crush the black sun.

There’s a feeling of subversive joy when immersed in a collective, and our striking hearts bring traffic to a stop. I see it as a garden full of flowers marching through the streets, the vibrant hues of our multitude compel those on the outside to bear witness to our anger; our sorrow; our pleas for justice. And perhaps it’s possible to plant seeds with our footsteps, for our words to travel like pollen. Some are aggressively allergic to the rupture we cause to their whitewashed days. Others can let the message and movement metastasize in their hearts, if they choose.

In the 1970 documentary “Meeting the Man,” James Baldwin has to endure one patronizing question after another by a group of smug white filmmakers. Baldwin, always brimming with prophetic fire, did not let the asinine questions stop him from delivering poignant, prescient social commentary. “Walk down the street of any city, any afternoon and look around you,” Baldwin implores. “Everyone you’re looking at is also you. You could be that person, you could be that monster, you could be that cop. And you have to decide in yourself not to be.”

That day, in my mind, I see Baldwin’s words scrawled across every wall in town.

When we gather around the grotesque racist statue outside the Toh-Atin Gallery, the organizers of the event – primarily Indigenous women – speak with ferocity as they denounce the statue, its degrading depiction, its connection to the ongoing dehumanization of Indigenous peoples by the settler state, and the business owners who refuse to acknowledge these realities, clouded by the white gaze of denial.

At one point, these speeches come to a pause when a white woman awkwardly tries to drive through the alleyway where we are gathered. Unfazed, perhaps even unaware there was a rally happening right in front of her, she is determined to pass through. With her turn signal on and an impatient expression on her face, we move away, giving her space to drive by. We were baffled by her actions, but it was no surprise. When Indigenous-led movements become visible enough, reminding the world of our existence, we risk exposing ourselves to such foolish acts. Throughout the rally, the Indigenous speakers urge white allies to hold themselves and other white folks accountable, to shed the violence of whiteness, to be accomplices in decolonization. If anything, the incident with the vehicle served as a reminder of that.

As the car sputters away, the speeches continue. A banner is attached to the base of the statue, reading, “Racist imagery is one of white supremacy’s favorite tactics.”

When my friend and I leave, we are approached by observers asking about the whole point of it. One guy can’t believe we are calling the statue racist. He storms off, repeatedly saying the statue isn’t racist. For a split second I follow, trying to reason with him, hoping he could see the visibly crude caricature for what it was. I sigh and stop. From there, we continue our exit.

I find it hard to readjust to the slow decay of a “normal day” after attending these demonstrations. It takes a while to come down from the emotions that swell through the body. And one hopes to walk away into a world that has incrementally changed for the better. But sometimes one immediately encounters those with doubt and disdain for what you put energy into.

“Love has never been a popular movement,” Baldwin said in the documentary. “The world really is held together by the love and the passion of a very few people.” I pin these words to my chest and think of the women and queer folks from Indigenous communities who helped organize this rally. They are those very few people holding everything together. They are long-distance runners in this ongoing struggle for justice, and I, among many others, have so many miles left ahead to catch up to them.

However long it takes to bring down this statue will depend upon voices in this community, especially those in more privileged positions, joining in solidarity to put more pressure on this business. And whether it’s outside an art gallery, on the frontlines defending sacred land and water against treaty-violating pipelines, or in the streets condemning violence against Native women, children and LGBTQ folks, we will continue to assemble. While others weigh the value and risks of choosing the bottom of their hearts over the bottom line of profits, we will continue to make our voices heard. The failure among others to see the humanity in our demands only speaks of a failure to find that same humanity within themselves.

It would be easy to give in to despair and callously stare from the sidelines. Much like the gallery owners choose to let that racist statue remain, it doesn’t take much effort to perpetuate the daily violence of the settler state. One can give in and get used to the blood on their hands by merely numbing the beat of their hearts.

To rupture against injustice means to shed the privilege and injuries the world inscribes onto one’s skin; to stand with those miraculously alive, thereby impossibly free, despite the shadow of celebrated genocide. To speak truth in the teeth of power. To let our collective striking hearts stop the pulse of this beast.