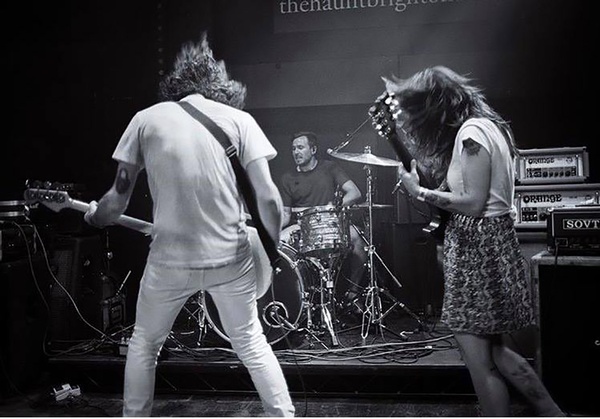 It’s easy for the heart to ache for many things lately. Regarding matters less grim and tragic, oftentimes I think of the music venues I love throughout the Southwest and how for the last year they’ve been ghost towns in a hemorrhaging state. Live shows will someday happen again. When we can safely embrace those spaces again, I hope many of these venues can pull through.

For the time being, I’ve been stuck in a rabbit hole of memory: re-watching old footage of live performances; finding a new appreciation for live albums; nursing the wounds of regrets for shows I skipped out on; and fondly reflecting on shows I attended. One experience stands out in particular.

Rewind to 2014: Albuquerque, N.M., where for a brief moment a little punk rock venue was able to sneak into an innocuous business district.

Huddling with 30 other people outside a tiny rundown building, our excited skin bursts into goosebumps as we wait in the November night. My friend Rinda and I drove 200 miles from the Navajo Nation to an abandoned-lot-turned-concert-venue known as The Gasworks. Bundled in coats and cigarette smoke, we shiver with nervous energy as four underground rock bands unload from humble vans and U-Hauls. All of them have arrived from around the country to play a show in the urban desert, in a space the size of a garage.

This is my first time at Gasworks – unfortunately it is the last official show for the four-year-old venue. In front of me is a scene that embodies the importance and fragility of such independent spaces. When the doors open, the little room grows with warmth and chatter as people file in and a bittersweet joy fills the air. A sublime passion for the subterranean has brought us together.

Every inch of space in this tiny building is put to use. Near the entrance, tables full of merchandise are set up – records, posters, shirts and stickers are spread out like a feast. Rinda and I briefly rummage through, keeping tabs on what we’ll come back for later. We squeeze our way into the performance room. The opening band sets up on the same level as us, and the crowd is wise enough to keep a respectable distance.

The band Gates kicks things off with ambient post-hardcore rock. Pedal boards like an artist’s canvas lay on the floor. For 30 minutes, they create a dreamy, swirling sound of reverb and fiery distortion, backed up by pummeling drums and booming bass. One song starts out with twinkling guitar riffs, a hushed tap of drum cymbals and the vocalist crooning with a slapback delay that creates a subsuming echo. The sounds dangle in the air like drops of rain and gradually build with intensity. The whispers turn to screams, and the guitarists let their fingers dance while their feet tap different effect pedals. They compose a dramatic buildup – raindrops turning into rainstorm; thunder and fire from the bass and guitars scream out. The guttural cries reverberate and the drumming becomes erratic as they reach the apex and suddenly – there’s a pause: they let the notes hang in the air, and we are spellbound. Before we become too lost in this void, they dive back into a frenetic outro, digging into their instruments, pounding out scorching notes, extracting the soul and sending it out across the room. Rinda looks at me with wide eyes and dropped jaw, summing up everyone’s reaction.

A heavy swell of scents gradually fills the air – the mossy, messy whirlwind of body odor, dirty hair, cigarette-soaked clothes and that trickle of marijuana coming from someone somewhere. The next band comes up: Foxes. They keep up the cathartic sound of post-hardcore punk. Distortion-drenched chords cut into the atmosphere, followed by clean, jangly guitar. It’s a manic monster sound of 21st century despair in the underground. When the vocalist isn’t dancing with the microphone, in between his shouts and whispers, he takes a trumpet and blares out a melodic cry amidst the chaos of odd time signatures and bouncing basslines.

After that set, a man with glasses and an acoustic guitar who goes by the moniker Into It/Over It takes the stage. At this point, Rinda and I withdraw to the back for a breather. We swing by the merch; the tables nearly fill up half the cramped room. Still steeped in the glow of the moment, Rinda buys a tour shirt, and I pick up a comic book and a couple of 7” singles. Now I have the burden of preciously holding onto these records for the remainder of the show.

When Into It/Over It ends his set, the headlining trio known as Lemuria take over. While setting up their equipment, the crowded room cheers in anticipation, eager for their infectious, quirky pop rock, complemented with female-male dual vocals. The male bassist and drummer wear blue jeans and white tees while the female guitarist, Sheena, dons a cool flowery dress with bangs and black-framed glasses. No guitar pedals are needed – just amps pumping loud distortion. At one point, Sheena croons, “I’m not a Stevie/ I’m a Christie McVie/I find comfort in being second best.” I fixate on the words; how it sums up this place and all in attendance.

During Lemuria’s performance, a young girl makes her way to the front, accompanied by her older brother. She stares adoringly as Sheena grooves back and forth singing sweetly, her fingers crawling across the fretboard. When the group finishes, Sheena reaches down and hands her setlist to the young girl. The girl’s face lights up. Then, with members of the night’s previous bands joining in, Lemuria break into a cover of “I Melt With You” by Modern English. Everyone erupts into an ecstatic singalong, belting out what will be the last words to the last song performed at the last show for this venue. We become baptized one more time in the bittersweet sweat and scent of each other.

And then the show ends. The lights turn on, and the venue owner says one last goodbye. A crowd of a hundred or so cheer and applaud the life and death of Gasworks. As we mournfully pour out into the night, “We Are the Champions” by Queen plays over the PA system. Rinda and I look back at the venue.

“All my favorite shows happened here,” she says. “I’m gonna miss this place.”

We get in my car and make our long way home, leaving the punks huddled together, making plans on where to go next.

Kirbie Bennett is a member of the Navajo Nation and calls Durango his second home. When he isn’t writing or buried in books and comic books or playing the guitar, he’s a bookseller and manager at Maria’s Bookshop.