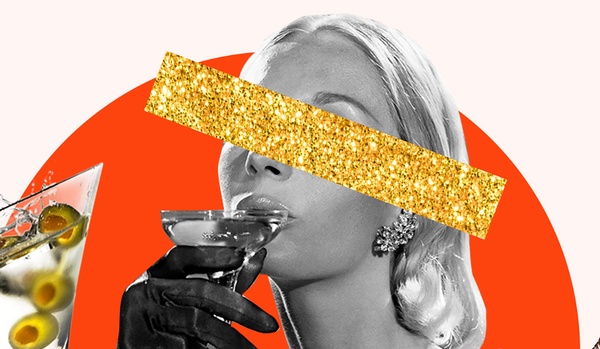 We’re officially more than halfway through January, and I was wondering – How are your New Year’s resolutions going?

I often forget about this tradition, and it wasn’t something I subscribed to until last year. As someone who can appreciate a deadline to become more accountable, the first day of a new year acts as a target that I can take aim at. Or perhaps it’s the simple task of changing my calendar that helps me gain that little bit of motivation.

For 2022, I decided I would stop drinking for a month. But what started as an attempt to slow down on drinking eventually became a mirror to my own use of alcohol as a crutch. The first two weeks felt exciting that I had this resolution to focus on – but also somewhat boring because so many of my social interactions and downtime centered around drinking. I came to realize that I believed drinking helped me access parts of myself – the cool, sexy, spontaneous parts – that I thought I could only access with the help of a little (or a lot) of alcohol.

Eventually, I found myself having fun again at social outings. I realized I was acting the way I typically would if I was drinking – sort of silly, sort of spontaneous, sort of cool. Well, maybe not “cool,” but more myself. Knowing that I could have fun sober and that the people in my life enjoyed spending time with me felt not only reassuring, but also freeing.

On Feb. 1 of that year, I realized I could keep going. “A month” was an arbitrary time that I could easily change if I wanted. I found myself repeating bits of dialogue from the film “Forrest Gump.”

I ended up running with this resolution until the first week of April.

I decided on this resolution again for 2023 because I thought my body would appreciate time recovering from the drinking that happened around Halloween. And Thanksgiving. And Christmas. And New Year’s. And especially the drinking that happened during the staycation I took last month that included plenty of bloody marys and tasty late-night martinis.

However, I’ve started to wonder if this resolution is not without its faults. I dreamed last night about having a drink, and I woke up feeling disappointed that I had broken my resolution. Although it was just a dream, the disappointment that lingered was real. Would I feel this same disappointment if I had a drink in my waking life?

I wonder if it’s better that our resolutions aren’t tasks. Tasks become opportunities for us to fail, and then we feel bad about ourselves when we do. When making resolutions, do we make an allowance for life? Are we kind to ourselves when we don’t succeed? Emergencies happen. People grow older. Interests change. We change.

Shortly after the above dialogue is spoken in “Forrest Gump,” there is a scene in which a herd of reporters are yelling a string of questions toward him, hoping to understand why he is running across America. Forrest replies, “I just felt like running.”

One of the most recent examples of when I did something because I “just felt like it” was on Christmas Day. I made plans with my sister, Nicole, and good friend, Ben, to have dinner at my home. Before my sister arrived, I found myself wanting to become my drag persona, Rita Booke. No crowds to perform in, no pictures to take – it was simply because I felt like it. I gifted myself the opportunity to get ready and my guests gifted me the time to do so while they cooked.

Before this, the pressure I was putting on myself to perform well as a drag artist became almost debilitating. Anytime I was running late, which was often, I would curse myself for not being more prepared or faster or better. Anytime I felt my makeup looked off, I would tear myself down before I even had a chance to leave the house. The self-deprecation would get so bad that I felt it necessary at times to apologize to myself at the end of the night.

In both cases, the goal was the same – to become Rita. However, by becoming her because I felt like it, I was reminded that I can accomplish what I want without the threat of failure. The resolution that lasts is not the one that reprimands us, but the one that gives us an opportunity to gift ourselves kindness when matters change and the ability to listen to our inner voice when it whispers, “What do I want?”