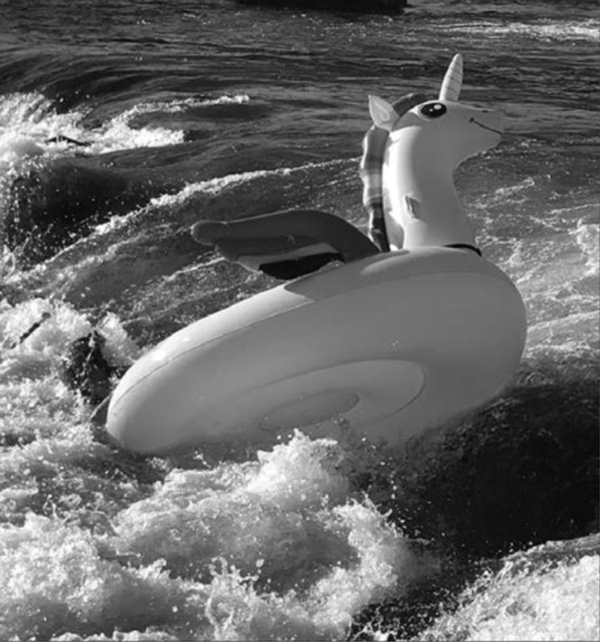 It’ll be fun, they said, handing me a wetsuit and some booties. Just remember to keep the pointy side down, they added, referring to the old school 5-inch Presta valve protruding at a dangerous angle.

And with that, I was dispatched a black innertube ala a Country Time lemonade commercial and waded into the rushing torrent.

However, what ensued was about the furthest thing from a relaxing summer float as one could conjure. As soon as I wedged my neoprened posterior into the doughnut hole, it was more like something out of Mr. Toad’s Wild Ride.

It was spring in the Yampa Valley, and the usually idyllic and demure Yampa River was angrily churning with more than 3,000 cfs of fresh snowmelt.

Within mere seconds, I was whisked away from my tubing partners and found myself at the river’s mercy. For a girl from the Land of 10,000 Lakes, whose idea of water adventure heretofore was pontoon rides and the occasional riverside kegger, it was nothing short of terrifying. For the next few minutes – which seemed an eternity – I clung onto the flimsy piece of rubber keeping me alive, while getting may-tagged like a load of dirty laundry. Finally, after a near-death chundering in a feature fittingly known as the A-Hole, I managed to drag my own sorry one to shore, claw up the embankment and once again kiss terra firma. Downstream, I saw the three bedraggled others in my fooltilla do the same, like drowned rats flushed from a firehose.

And so went my introduction to Whitewater 101. It was your standard affair: clueless girl, no life vest, well-meaning but overzealously adventurous boyfriend and really no business being out there. (Although I do deserve points for having a wetsuit and booties. And not getting impaled on the valve.)

Remarkably enough, that little episode of “Faces of Death” did not dissuade me returning to the water. Rather, it inspired me to learn the basics of river safety and be prepared in the event that the river has its way with me (which it always does sooner or later). Because if there’s one thing I learned that day, the river is not messing around. (That and perhaps I should find a new boyfriend who’s not out to kill me.)

The point in telling you this, dear reader, is not to scare you from ever going near moving water again. (Remember, 90 percent of river accidents happen on shore. I heard that once from a park ranger, so it must be true.) Rather, it’s to prevent you from also becoming a floating yard sale.

See, while the above scenario easily could have been ripped from the pages of Darwinism, Natural Selection and You, I like to think of my 23-year-old self in this instance as simply ignorant rather than stupid. And yes – there is a difference. Ignorance is not knowing what you don’t know, whereas stupidity is not knowing but acting like you do.

The reason I bring this up is because I’ve been privy to quite a bit of “ignorance” on the river as of late – a simple, basic lack of information. I’m all for running the gnar and having fun out there, but a little prevention goes a long way – much in the same way I would have appreciated someone slapping a life vest on me or just slapping me upside the head all those years ago.

Over the years, I have fished more than a few cotton-clad, blue-lipped floaters from the Animas. And it is never fun to watch someone dry heave on the side of the river after doing the Ethel Merman through the play park. Just the other night, I watched in morbid fascination as a raft got side-surfed in a hole above Smelter. The captain dove out like a rat fleeing the Titanic, leaving his panic-stricken passengers to fend for themselves. (Alas, once the boat was spit out, the lone remaining passenger had a perfect line, all the more miraculous given she didn’t have a paddle.)

Then there are the hapless tubers who took to the Dolores River at 3,000 cfs and the countless scantily clad tubers during high water, giving whole new meaning to shrinkage.

The point of calling out such folks is not to look down my smug plugged nose at the misadventures of others. Rather, it’s to offer a few simple tips so everyone stays safe and warm and lives to drink that dank booty beer at the take-out.

• The river is cold! Like 45 degrees cold. You know what else is 45 degrees? Ice water, hell frozen over, a Slurpee and the rings of Uranus. You wouldn’t submerge your bare-naked self in those, would you?

• Cotton may be the fabric of life, but when drenched in frigid water it becomes the fabric of death and will suck the life out of you faster than a trip to the DMV. It also dries at a glacial pace, ensuring your teeth will be chattering until they wear down to little nubs. Please, for the love of god, wear some neoprene or at least a fleece or spray jacket. They may not look cool, but neither do teeth nubs. (Shameless plug: for up-to-date river flows, go to durangotelegraph.com)

• Booties are not just for slapping. They actually keep your feet warm and protected from sharp rocks in the event of an unplanned wet exit. At the very least, please wear proper footwear that is attached to your feet. Lake Powell does not need any more orphan flip flops, and we don’t want to become known as the River of Lost Soles, do we?

• Put the “u” in self-rescue. If this entails loosening your death grip on your paddle or the raft’s chicken line so you can bust a move to the nearest eddy, so be it. You gave it a good effort, and someone in Farmington will be psyched to have your raft (just kidding – no one down there rafts.)

• Never dive from the raft. Even if you are Greg Louganis, and even if you are wearing a helmet. Plus, if you abandon ship, you probably will not have a girlfriend at the take-out. Or really any friends for that matter.

• This should go without saying, but never attempt to run the river without a PFD (aka personal flotation device, aka life jacket, aka life p’rsrver.) Same goes for Fido. I don’t care how well a swimmer you fancy yourself and your canine companion. Unless you have gills, you’re no match for the river gods (who issue extra-savage beatdowns to anyone not wearing one. Why tempt them?)

• And last but not least, always keep the pointy side down. It’s no fun being up shit creek.