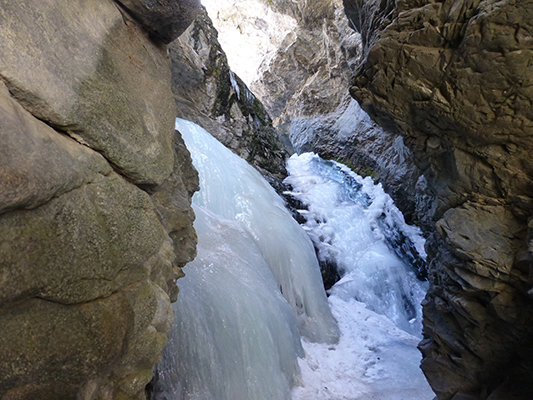 The 1952 movie “Viva Zapata” starring Marlon Brando portrayed an account of Mexican revolutionary Emiliano Zapata. One of my favorite novelists, John Steinbeck, wrote the screenplay. But instead of taking you there, let me direct your attention to a completely non-Hollywood experience, an often explored Zapata not crafted by film-folk but by the natural forces of geology and weather that can be viewed by climbing 3.5 miles of switchbacks along a rocky road to the trailhead for Zapata Falls. You’ll have to bring your own popcorn.

Great Sand Dunes National Park & Preserve, southeast of Alamosa, is where you’ll have to go. My first visit happened 20 years ago. At the time Medano Creek pulsed and surged through the sand like an ocean tide, and I felt its mysterious current pounding against my legs. I still carry that experience, tucked safely into my memory’s saddlebags.

This spring, I stood there once more, beside the park’s 30-square-mile sandbox, staring at the snow-capped
mountains beyond. A few determined hikers with walking sticks were ambitiously trudging toward the highest visible dune peak, even as a stiff wind out of the southwest conscientiously erased their tracks. Children playing at the edge of the creek shouted and splashed in the water. Spring break had blossomed at the best beach in Colorado. I shed my jacket and sat on it like a towel while brushing damp sand from my bare feet.

My thoughts ran back toward the turnoff sign I had passed on my way into the park marking the way toward Zapata Falls. The word drummed a rhythm in my head. Zapata Zapata Zapata. Like raindrops from some imaginary cloud. A 30-foot waterfall in this kind of desert? So remarkable a thought I tied my shoelaces, glanced toward the parking lot instead of the nearby sandy slopes. My plans for a hike suddenly shifted to a new location. I had to take a look.

The truck climbed 31⁄2 miles of knobby, river-rocked access, bucking like a braying mule over a rough road. Ten miles per hour, with a few acceleration bursts up to nearly 15. The climb felt like it lasted for hours.

When I reached the trailhead, a single vehicle was parked there, and the view was spectacular. Below the overlook the tallest sand dunes in North America stretched out lazily in the shadow of the much taller snowcapped Sangre de Cristo Mountains.

The information board at the trailhead explained in bold print that to reach the falls a hiker had to exert only a half mile of effort, but it was all uphill, including a hazardous stumble into the flow of a rushing creek, through a maze of loose, slippery rocks. Basically, it said, count on getting your feet wet. I glanced at my dry boots and thought, well, at least I’m not barefoot anymore.

Trail conditions proved ideal, dry and not too steep. Spring had been here before me. Green grass and tiny mountain flowers basked in the sun. I stepped to the side as two young women outfitted in tennis shoes, tights and camisoles headed back down the trail, distracted by their cell phones, quickly glancing up only to return to the view of the selfies they had collected at the waterfall.

Half-a-mile breezed by. When I reached the nexus where water and trail merged, I found the creek but it had been lulled into a trance, still meditating on winter, still covered with snowpack and ice. Clinging to a rock wall, I carefully inched my way toward the sound of rushing water. I was standing on a frozen platform above the trail while invisible water gushed audibly below my feet. Then farther upstream, a slot in the rock grew wider as if caught in a beam of light, illuminating the sparkling and slippery surface.

Slick rocks towered above me. The notch broadened to scoop out a wide cavern. I slid along the wall to steady myself, using it like a handrail. Suddenly I could see where the top opened to the sky and sunlight played against the surface of a massively layered ice sculpture that had crawled down to the floor where I stood. I could hardly believe it before noticing that within the mass of ice, a ribbon of water pulsed through it, not over it. The creek was contained like a snake by its wintered skin.

The cavern trickled and dripped, trickled and dripped – a space so full of moisture it floated down from the skylight transformed into a flutter of whimsical snowflakes, like in a snow globe, and I was standing at the center of this little universe, stirred, but not shaken.