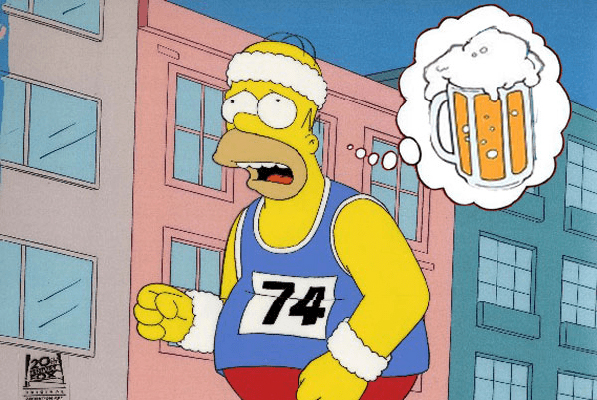 Everyone in the U.S. of A is on edge. Not only is a global pandemic going on, eight months after we thought it would be finished in two weeks, but we still won’t know for months who is the true, certified winner of Season 19 of “The Voice.” No wonder we’re all stressed out. We’re basically in survival mode. Which is the only good reason I can come up with to explain why I am still running.

You might remember that I started running as a doomed pre-New Year’s resolution last year, strictly to burn off enough calories to eat whatever I wanted over the holidays. It turns out, you cannot run enough to burn that many calories. That is just one of many ways that running is not a useful skill.

The best use for running in this modern world is to get yourself back home faster once you realize that you never should have left the house in the first place. Running is as vestigial as our tailbones or general hygiene. Humans learned to run so we could catch our food and – so long as we were one step faster than our S.O.s – evade predators. When is the last time any of us outran our dinner instead of running out for dinner? And we hardly ever get eaten anymore. Just look at the food we buy. Would you eat an overgrown monkey who subsists on Oreos?

Some people run for fun. These people are lying. Running sucks the air from your lungs and the joy from your day. But only for the first half mile or so, the runners tell me. Then your body resigns itself to its nihilistic fate – the sensation of giving up that these people spin as “the runner’s high.”

I cannot claim connoisseurship of recreational drugs, but among my experienced highnesses is the time I got mildly giddy off a permanent marker when we helped my fifth-grade teacher box up the classroom because she was transitioning to a less stressful career as, I don’t know, an anesthesiologist. Running has never yet offered me a whiff of anything like that marker.

Besides, used to be that any time I ran, I developed shin splints. Thank god. This was my body’s natural defense against such a painful and senseless activity. So I would stop running. For more than a decade, I never ran more than a half-mile at a time, and then only when I was really, really late for a really, really expensive appointment.

But then I did that stupid “Couch to 5k” program. Even though I never quite made it to the 5k part, I still ran farther than I had in the last 10 years combined. Then 2020 became ALL CAPS 2020, and I guess my survival-mode fight-or-flight kicked in, and… well… I flighted. I flighted my heart out after a well-intentioned running respite spent doomscrolling toilet paper memes for a few months. And when I pulled up from flighting, I nearly pulled off another survival-mode F: fainting.

My body declared in clear, articulate terms that running is stupid and it would have no more of it. In fact, it used another survival-mode F-word to make its point heard.

I agreed with my body, in that I knew it was right. But I didn’t agree enough to give up. Not this time. Not when my only remaining untried COVID-days activity was to fail at baking sourdough bread. I’d already organized the shed and dusted the house once. And running sounded better than doing that again.

So out the door I went, like the idiot I am, and I ran.

This is the part of the story where I tell you how I was wrong about running, and I experienced some beautiful epiphanies alone in nature that revealed to me, after all these years, that the purpose of running is that it has no purpose outside itself and that’s where I found true peace. Except, like all runners, I am also a liar.

Here’s what really happened: I finally ran 4 miles for the first time, and on that same run I also ran 5 miles for the first time, because I explored a less-traveled country road that turned out to be a dead end instead of a loop. I later went up another new road and set a personal record for sprint speed because two big mutts with big white teeth scared the Gatorade out of me.

I guess my running abilities really did save my life. But I would be just as alive, and a lot less terrified, if I had just stayed put. So that’s what I’ll be doing, in point of fact. Until I run out of Oreos.