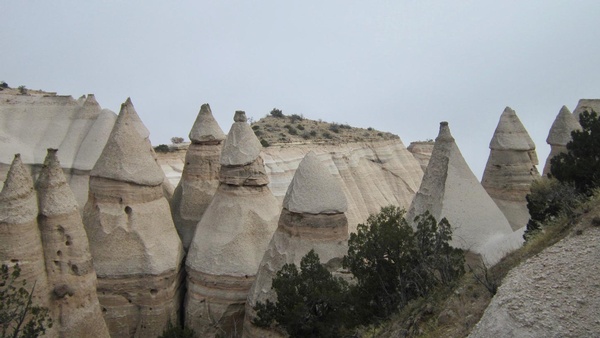 The cone-shaped formations at New Mexico’s Tent Rock National Monument stand tall, having survived an era of great upheaval. Good for them. As I approached the park entrance gate, I couldn’t see any, but I overheard the employee on duty giving phone instructions to an invisible workman about some scheduled repair.

“We may be closed tomorrow,” he announced to his hand. “Yeah, I’m kinda hoping for a day off.”

While I waited for him to finish his call, I scratched my head and puzzled over the news that the Park Service would be celebrating a holiday, and I had no idea what it might be. Even feared I’d become a run-of-the-mill, too-busy-to-pay-attention kind of American. Then it dawned on me. A government shutdown starts tomorrow, if stopgap funding isn’t negotiated by midnight.

Who can be blamed for not remembering such an irregular holiday, our national celebration of partisan politics? Instead of the usual flags, what about refusing to wear the colors of Republican red or Democrat blue?

Sadly, the federal employee clad in brown and green standing before me had to show up for work the following day, even though three days earlier he must have listened with interest as the Republican White House drastically reduced the size of two other national monuments, Bears Ears and Grand Staircase-Escalante, both located in Utah, and both designated by Democratic presidents.

This political climate forces people to grapple with the mind of a border schizophrenic, an advocate of building walls for stronger borders while at the same time knocking down national monument boundaries to appease the industrial interest in extracting cash from protected public acres. I wouldn’t blame Park Service employees if they started calling in every morning just to find out how much their salaries have been reduced overnight.

Lucky for me, I’d only planned to hike 2 miles of trail on 5,000 acres of safeguarded land. At the time, I felt safe, confident that the trail wouldn’t be rolled up like a carpet and hauled away before I returned to my truck. There are people who still believe in public trust, and I trust them. The ones who believe the state of New Mexico is somehow influenced by the Mexican government still make me nervous.

Tent Rocks was legally set aside under the 1906 Antiquities Act as a national monument by Bill Clinton in 1996. It preserves for future generations unique geological sculptures that formed when volcanic eruptions spewed enormous rock fragments and prompted an avalanche of pyroclastic flow. My impression 7 million years later: cool!

I am not, however, impressed with the partisan effort to shrink our national heritage. If the Nevada rancher family of Bundys who led an armed revolt against the BLM at two locations in the West, and the armed ATV riders who raised a lot of hell-dust in San Juan County, Utah, across the fragile terrain of Puebloan ruins are leaders in a new era of public awareness, then I’m pinning my hopes for the future on a few more active volcanos.

As I hiked the trail, up a steep 630-foot climb through a magnificently carved slot canyon, a flurry of what looked like volcanic ash began to fall. It turned out to be snow. The idea that I might reach a vista to look back on this land motivated me to crawl over many awkwardly wedged rocks and slide my lazy ass along crevices so narrow I feared it might get stuck.

We could all benefit from a better view. A chance to rise above the bickering and truly see the kind of legacy most Americans hold dear, this patch-work of public lands, national monuments and national parks that should exist in perpetuity. The extraction of resources is a poor excuse for turning our cultural heritage into tailings.

As I climbed, I realized how fortunate I was to live in the West, able to be present in what others only hear about in the news. To them, a national monument is an abstraction. To me, it’s the dirt in my back yard, which could be why I get so sedimental about our public lands.

When I reached the mesa top, I turned around and sat down just to catch my breath. Off in the distance, there were expansive views of the Sangre de Cristo, Jemez and Sandia mountains. Snow continued to fall. Over a precipice, I looked down on a congregation of Tent Rock formations standing at attention like soldiers, like old stone spires, like the relics of prehistoric cathedrals.

We may need to temporarily close Washington, D.C., and send all our politicians on a little career-related holiday. Democrats to Utah. Republicans to Mexico.