Seeing but not believing
The smoke, mirrors and alternate reality of today's political landscape 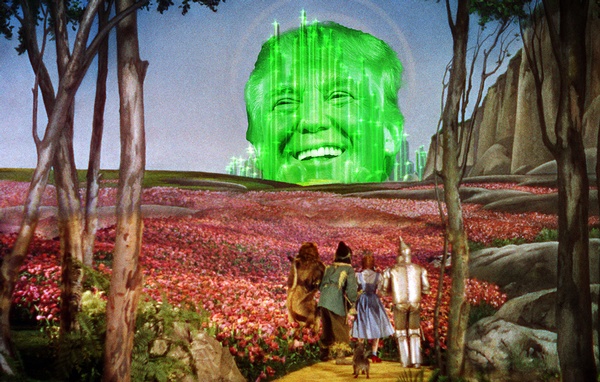 My father-in-law had more than a few quirks wired into his brain. I distinctly remember sitting next to him one warm summer evening as a big moon took over the night sky. “Awe-inspiring” was the phrase climbing down from my brain toward my tongue, but before I could speak my father-in-law conspiratorially leaned toward me and whispered: “You know, it was all a backlot studio hoax, those astronauts walking on the moon.” Then he leaned back in his chair and raised one finger to his lips, as if to warn me that this confidence should not be repeated.

This happened a quarter of a century ago, long before any QAnon forum existed, but such a culture for idiosyncratic theories reaches way back, possibly as early as Neanderthals, who may have considered themselves superior to the Cro-Magnons because those lowlifes typically hung out with the monkeys.

It’s storytelling that skillfully weaves reality into a worthy narrative as it sensationalizes the mundane and transforms truths into snippets of astonishing dramatic fiction.

Folk tales collected by the Brothers Grimm were read aloud as moving morality lessons for youngsters by both parents and grandparents. They were also used as Nazi propaganda to bolster their war effort.

Ellen Handler Spitz in a 2015 New Republic article “The Irresistible Psychology of Fairy Tales” observed, “A very young child will listen wide-eyed, an older child will pose questions, and an educated adult will feel impelled to criticize but with a gnawing deep-down feeling that the story merits attention and bears a species of uncanny truth.”

But factuality requires a separate belief system, like memorizing the multiplication tables or learning to dance, a series of steps that once practiced becomes second nature and often surprisingly graceful. Aristotle wrote that “It is the mark of an educated (person) to look for precision in each class of things just so far as the nature of the subject admits.” In other words, there are some things that can be known, and some things that can’t; it’s the mark of an educated person to be able to tell the difference.

And then there’s the Oz-ish world of today’s politics where democracy tries to outrun a tornado, bumps its head and wakes up in a strange but awkwardly familiar place, an alternative reality that’s a bit frightening. Monkeys transformed into flying creatures with a wicked witch leading the attack. How a rogue militia managed to assault our seat of government because it didn’t agree with the results of our 2020 election is not as simple as following a yellow brick road. Questioning the Jan. 6 attack is not a witch hunt, because witches are mythical beings. Mere mortals are what should concern us.

Like Dorothy, learning the truth of what’s going on behind the curtain requires an obstinate pursuit of facts, not just a magical acceptance of the situation, clicking our heels and wishing our way back to normalcy. Still, brains, courage and heart are the ingredients for a strong America, and it’s never too late for the munchkins inside us to grow up.

It’s also important to understand that factoids are not facts. A factoid is an assumption reported and repeated so often it begins to stick. According to Wikipedia, the term was coined in 1973 by American writer Norman Mailer to mean a piece of information that becomes accepted as fact even though it is not actually true or an invented fact believed to be true because it appears in print.

Thanks to the Jan. 6 committee, we know an interval of more than three hours (that’s a fact) elapsed before our former president issued a public statement asking his supporters to go home. We can speculate about why he waited so long (fertile grounds for multiple factoids), but his own republican advisors and staff have publicly testified, under oath, that during this gap, despite urging him to quell the riot, he did not.

We can also speculate about why he took top secret classified materials from Washington, D.C., and denied they were at his home in Florida. But the FBI raid leaves no room to speculate: he had them in his possession over a year after his elected term ended. Do we know why? No. Did he have the legal right to keep these as souvenirs? No again. Should we be concerned? Yes.

The speculation could go on. But if we have the patience to pay close attention, at least to listen, hopefully a distinction begins to emerge. It’s one that even Albert Einstein – who may or may not have coined the following expression – would at least have recognized to be true: “The difference between stupidity and genius is that genius has its limits.”