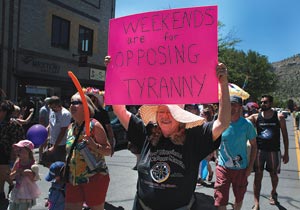 About four years ago, I was sitting at home, alone and bored, so I started looking up Yelp reviews. I looked up all my favorite Durango places and then looked up my new place of work – the Durango Telegraph. There was only one review: “The photographer Jennaye should really start to get out more, it seems like she just goes to festivals all the time.”

That really put a damper on my day.

To be fair, I’d only been working at the paper for a few months. I was so new, in fact, that people were still referring to me as my predecessor (and strangely enough, successor), Stephen Eginoire. And even though I’m
clearly a female and did get out – and not just to festivals
– this review still hurt.

But alas, Yelping the Telegraph should have very little to do with me and my allure to festivals, and more to do with the paper as a whole. So I am here to give a true and honest Yelp review by someone who knows about all the Telegraph ’s inner workings.

I’ve been a fan of the Telegraph since I first moved to Durango about 12 years ago. But the first time I knew I was truly and hopelessly devoted to it was at a downtown coffee shop about three years ago. It was late at night in November, and it had just started snowing – the first snow of the year. My boss and editor, Missy Votel, had called me to talk shop. But we ultimately started talking about the fact that I’d stupidly worn flip-flops downtown that day. Her response?

“If it makes you feel any better, I accidentally addressed a dozen letters to myself last week, and they all just arrived back to me.”

Even though I was uncontrollably laughing at her mailing fiasco, my respect for her skyrocketed. I got a glimpse into the world of a woman who can somehow balance the world on her shoulders while laughing at herself along the way.

A few years later on a spring night, I witnessed Missy receive an award for being one of four “Women Trailblazers” in Durango. As she stood up on the podium, made her signature witty comments and held the award like the rockstar she is, I ugly cried into my steak dinner and red wine.

Even though I’m not a crier, I’ve ugly cried more than a few times during my four years at the Telegraph. I’ve cried over frustration, stress and shame. But more than that, I’ve cried happy, elated tears at parades, rallies and even a belly dance flash mob. But there’s just something about people marching down Main Avenue demanding equality, justice or anything else they care passionately about that makes me hold my camera just a wee bit closer to hide the misty eyes.

I will admit, however, that the Telegraph has caused me to become a bit of a hoarder. See, in addition to photographer, I also play the role of Thursday newspaper deliver gal. At any given time, there are at least four months’ worth of old Telegraphs in the backseat of my truck. Yes, people are concerned, and it may be a fire hazard. But not only have those piles saved me from designated driver duties due to lack of seating, they have also saved me from burglary.

However, thanks to the mountain of papers covering the valuables in the back seat, any would-be thief was thwarted and my expensive climbing gear and a few electronics saved. Thank you, Telegraph.

In addition to all this, I’ve also gotten to cuddle bears, fly in planes, sail a boat, speed date, meet one of my favorite guilty-pleasure authors and rub elbows with the governor. I’ve met hundreds of strangers, a handful of them assholes, but many a new friend along the way. I’ve seen our river turn toxic and our forests burn. I’ve been witness to raw emotions during everything from intense elections to a few Super Bowls. Once, I followed a Stormtrooper around town and toured the sewage plant. I’ve made my former roommate Jason a local celebrity because he was always willing to model and pestered all my other friends to the point where I’ve lost a few.

With the help of readers, I’ve learned to let people know not to eat skunk cabbage and that Lake Powell isn’t actually 100 miles deep (oops!) I’ve soberly witnessed your antics at Snowdown and seen an 80-year-old shake it in a gold thong. I’ve carried my camera up mountains and hung off cliffs for the perfect climbing shot. I’ve planted myself on the side of snowy hills to get the best skiing angles and hid behind trees to nail the perfect mountain bike action shot. It’s never been easy – you try mountain biking with a camera between your knees – but always worth it.

In a way, this newspaper has raised me over the last four years, over the course of breakups, multiple moves and the occasional ride on the struggle bus to shit show town.

To Tracy, who has the softest, kindest, most compassionate heart I’ve ever met, I’m more than happy to receive her open-armed hug whenever she offers, which is frequently. Her big heart spreads through her stories, and even in my worst days, she makes me feel warm, fuzzy and loved.

Lainie is the momma bear that we all wish we had in our lives, and I’m lucky to have in mine. She is sweet, but stern. Understanding, but fair. She wants to see the best in you and from you because she believes in you. If someone crosses you, she’ll defend you till the end.

And to every person I’ve met in the line of Telegraph duty – including all the freelance writers I’ve worked with (shout out to Stew Mosberg) and particularly during my weekly “Word on the Street” victim hunt – thank you for talking to me. In truth, everything that has been said to me over the years has stuck with me, good and bad. Remember, compliments go far in an industry where most just criticize and bash.

And of course, thank you, Missy, for being the best boss a gal who’s struggling through her late twenties could ask for. I can’t believe how much time you spend at the gym or kayaking/skiing/biking/hockeying and can still crank out a paper each week. Your constant editing of my misspelled words astounds me. One day, I’ll learn the difference between pallet and palate, I promise.

So, to all of you who have supported me over the last years, and to the Telegraph, I “Yelp” you five stars. And for that guy who left that review three and a half years ago, you can go Yelp yourself.