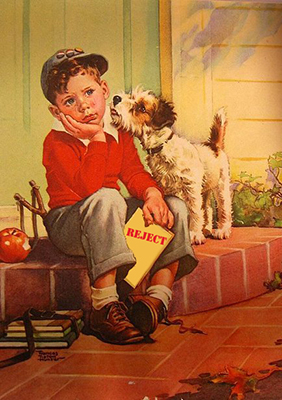 This week, I had an essay turned down by a literary publication for bordering on “the sentimental.” I’m not entirely certain what the editors mean by “the sentimental,” but let me assure you that they were generous and kind and complimentary about my work in every other part of the rejection letter that didn’t begin with “We regret to in-
form you.”

So I have come to the conclusion, based on the evidence that they did not pay me untold tens of dollars for my so-called “beautifully written” and “fascinatingly structured” work, that the sentimental is an undesirable trait to editors of literary publications. An unforgivable and unforgiving sin, akin to plagiarism or writing for children.

The rejection itself does not sting. One does not make it far in this writing business if one does not develop a thick tolerance, perhaps even a guilty glee, for the well-crafted rejection letter. The internet once delivered me a story about a man who submitted pieces by canonical authors to literary journals around the country, each one of which was told that tastes are subjective, and we are certain your future work will make for very effective firestarter. Through all of one’s own rejections, one holds such anecdotes close to one’s chest until one finds a home writing for the local alternative paper, at which point one fashions oneself a plausibly passable Pulitzer that’s still displayed on my refrigerator today.

Even the apparent slight of suggesting my work borders the uncouth land of the sentimental does not sting. Namely because, my essay IS sentimental. I cannot state this more plainly: it is an essay ABOUT MY DOG. Forget avoiding the sentimental. All my craft, all my skill, all my automated spellchecking, exerted itself upon using distinct words and not ending every sentence with “Whoozagoodboy? Huh? Huh? Yezyouare!” Because THAT is how I would naturally write about my dog, or act around my dog, or anyone else’s dog for that matter.

Shoot, as I narrate to myself right now, Hawkeye is resting in front of my writing chair, head nestled atop his purple chew toy, and heezocyootyezzeIS! He is pure love and tennis balls, just as my last guy Wally was pure love and contemplation, and basically my pen is now spewing out saccharine pawprints and puppy dog eyes.

The sentimental. I suppose I could have written myself kicking the dog once or twice, or discoursed upon how dogs really aren’t people, and it’s OK to leave them chained up in the alley overnight. Let his ribs show, in Steinbeckian prose, of course. Forced him to ride in the bed of the truck instead of the cab. That might have done the trick and gotten my essay published, at least on the ASPCA’s watch list.

I will own that sentimental badge. If it means I have a feeling, bleeding, beating, melting heart for dogs if not always for other people, I’ll take it. There’s just one problem: I’m on deadline for that local alternative paper, and now I’ve got the yips.

You see, I was going to write about taking Hawkeye out for his first-ever snowshoeing adventure. But they don’t make snowshoes for dogs. Kidding! Of course they make snowshoes for dogs, probably. They must. I mean, you can buy a personalized onesie for your dog. You can hire a personal life coach for your dog. You can send your dog to boarding school so you and your wicked new spouse can have the house to yourselves. Snowshoes would be the least shocking dog-related idea I’ve heard about this week, and if somehow no one else has made them yet, I call dibs.

No, I wore the snowshoes, and Hawkeye was essentially naked, as were his two doggie friends. My two human friends were, perhaps sadly, perhaps fortunately, clothed.

That’s what I was going to write about, but now I hear that gremlin atop my armchair clucking at each of my ideas and questioning its sentimentality. I was going to explain to you Hawkeye’s anxiety around taking walks, and how I wasn’t even sure he would make it past the parked cars. Too sentimental. I was going to describe the thick white snow, and how Hawkeye’s two friends taught him to enjoy his trek. All true, but probably sentimental. I was going to regale you with tales of how good all three dogs were, except for when two of them ate horse poop, and one of them made a break for the trailhead, and you’ve never really lived until you’ve seen two people on skiboards and one on snowshoes running in three different directions all trying to prevent the need for vet bills and Lost Dog posters. Definitely too sentimental.

So until I can overcome these yips and re-embrace the sentimental, I suppose this column is on hold. But you don’t mind, right? You’ll love me anyway? Huh? Huh? Yezzyouwill.

Yes, we are living in an idiocracy – and here’s the proof

More than just talk about health
Thanks for a home at Purple Cliffs
Cut the slackliner some slack
Salka will deliver the goods
What happened to good ol' GOP?
Your future is Marsha's focus
Read All in Soap Box