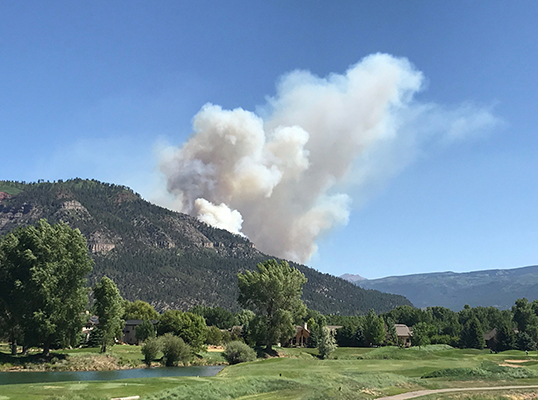 I’d spent the morning at the La Plata County Humane Society’s Adopt-a-Thon. Our family decided to adopt an adorable little kitten for our daughter, Kate. The plan was to pick up the newest member of our family, Ozzy, while Kate was attending her last day of preschool and surprise her when she got home.

We live in the Hermosa Valley.

It was about 10:45 a.m. June 1, 2018, and I drove while my mom held the tiny squealing kitten in her lap. We were headed down the hill on a two-lane section of Highway 550 North, coming around the corner of Animas Mountain when I saw it – a thick pillar of smoke spewing from the north end of the valley. All I could say was “Oh my god.”

The first thing I did was call my husband. When he answered the phone, he simply said, “I know.” He had just spoken to a friend of ours who lives at Tamarron, and they were already packing their bags.

The rest of that day was a strange mix of seeing my daughter’s joy, feeling my own panic, offering lots of people a place to stay, and having lots of other people make the same offer to our family.

I remember wondering what was important enough to pack. I remember waiting to see if we’d be evacuated next. I remember watching every video the firefighters posted on the 416 Facebook Page (I’ve never spent so much time on Facebook), and wanting to tell those firefighters just how grateful I was.

I remember one night – not long after the fire started – I watched as the bright orange flames crested the ridge at the north end of the valley, making their way down toward the homes on the other side.

Most of the people in our neighborhood came out into the street to see it for themselves. It was so surreal. We all had binoculars and beers on a warm summer evening. Any other time, it might have been a block party.

But the devastation we were witnessing, the worry of what would come next, the concern for those we knew were battling the blaze, and – yes – the shock that it was all really happening covered the neighborhood in a strange and somber cloud.

I remember a few days later during one of the community meetings at the nearby elementary school, La Plata County Sheriff Sean Smith shared a story. He told the crowd he had been driving along 550 after escorting some cars between Purgatory and Honeyville when the firefighting team came over the radio and told him to get off the road immediately.

The fire was about to jump the highway.

He pulled into Tamarron, parked his vehicle and got out to look around. He said all along the highway, he could see a line of firefighters about 10-15 feet apart. Each one had their backs to the west side of the road, which was engulfed in flames shooting up 30, 50, even 100 feet high.

Those firefighters, he said, never glanced over their shoulders – not even in one instinctual, momentary lapse of self-preservation.

All they watched was the opposite side of the road, looking for the smallest ember or spark. The goal was to put out anything on the east side of 550. The goal was to make sure the 416 Fire didn’t jump the highway. And, it never did.

There are still signs around Durango – and in the valley – thanking the firefighters for everything they did. When I see those signs, I remember that story.

I’ll admit I did not think they’d unlock the gates to Hermosa Creek this summer. I was eager – and maybe a bit anxious – of a forest’s natural life cycle.

That’s when I noticed the small yellow flowers blooming amongst the blackened stumps. Green leaves were already breaking through the barren ground, and life was when word came out that the Forest Service decided to open it a couple weeks ago. My husband, myself and my daughter got in the car and headed out.

The first thing that struck me was the openness. I hadn’t even realized how much vegetation lined the roadway until it was gone. But, things didn’t seem too bad. There were still scattered trees, bushes and other reminders of what was once there.

Then we turned one of the corners, and suddenly the landscape changed completely. It had been devastated – as if a nuclear bomb dropped. The only thing left were blackened stumps, covered in bark that looked as if they had melted.

I wanted to cry, and I almost did.

But then I remembered that in the life of that forest, I’m just a glimpse. Hermosa Creek has seen fire before and it will see fire again. Over the past century, our u derstanding of land management has changed from extinguishing all fires as fast as possible to realizing that fire is part coming back to the burn scar.

Just a few corners later, the forest started filling out again, and then we came to the campground. Amazingly, the Lower Hermosa Creek Campground was unscathed. We spoke to the gentleman who’s been running the campground for years.

He told us that when the Forest Service officials came back to the area after the fire, they found a camping slip still tacked to the post at one of the campsites. It was unburned, unsinged and dated June 1 – the day those campers had planned on leaving.

It’s true, questions still linger and some scars still burn. But, if you head on out to Hermosa, you’ll see the flowers are starting to bloom, too.