There is a cyclone of homesickness that blows steadily around Durango. And as with most gyroscopic forces, it’s bloody hard to break out of once you’re inside it. At least that’s what I tell myself when I come back every summer and find the same people I grew up with returning year after year. It doesn’t matter how far we may have run, we always plop back onto this bucolic burg. Yet, what doesn’t make sense is, why? Certainly our town is nice, and for the outdoor spirit, it is damned close to perfect. But the world is large, and Durango is just a corner, where does the magnetic draw really come from, and how the devil do you break free?

It’s not like we’re all without opportunities. Whether a student graduates from DHS, Animas or any other high school, they will no doubt have some prospects. We’ve had Durango brats competing in the Olympics, touring Mongolia for “research” and working for presidential campaigns. There’s probably even some getting ready to launch NASA rockets.

So why, when I walk down the street on a summer evening, do I see so many familiar schoolyard faces? For that matter, why am I walking down the street in the summer? I mean I should probably have been out saving pandas, teaching the pope how to smile, rescuing baby avocados from toast-thirsty millennials, or be on a mission trip to Australia like one of my peers. (Lord knows those dingo-bitten criminals need some sort of salvation). It doesn’t make an inch bit of sense that we all end up back here. 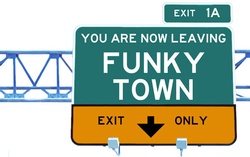 Just the other night, while grabbing a drink downtown, I had the pleasant yet puzzling experience of seeing at least five or six kids I had graduated with. The former Durangotangs had been off jet-setting the world and were back home for no longer than a month. I, like them, was back for a summer stint, and all of us seemed to have better deals going on elsewhere. One kid was making Bolshevik historical zombie thrillers, another had a gig as Mitch McConnell’s personal masticator, and a couple were working together on cloning a plesiosaur (a Mesozoic marine reptile, for those without an extensive dinosaur background). And all of us couldn’t figure out why the heck we had ended up back in Durango.

I, for one, suspect some mystic tomfoolery is afoot. It doesn’t matter how far away we go or how successful we become, we always seem to get dragged back. It’s like the relationship Trump has with Mar-a-Lago. He is the literal leader of the temporarily free world yet he keeps coming back to Florida for a crappy game of golf and a footrub from an octogenarian retiree from New York. Whereas the peers in my generation return for the comforts of sleeping on an oddly stained futon in the basement and drinking overpriced microbrews while guiding sunburned tourists down the Animas.

Perhaps it’s like a Bermuda Triangle type situation. There you are, minding your own business in a dorm room at CSU, when a mysterious fog rolls in, the lights flicker, Morgan Freeman’s voice comes over the PA. Then ... pop! ... you’re in Steamworks with a wicked hangover, $20 missing from your wallet, no idea how you got there and some guy named Perdy Whitey telling you about his new ketone kale enema start-up. It’s totally wacko, and the forces pulling us seems to be massive.

Unfortunately, as well as bringing back Durango’s run-away twentysomethings, the mystical force also likes to grab a whole bunch of panhandlers and Texans. The latter being the true pandemic. Probably because of the weed. Where’s the Fox story on that?

That being said, maybe it is a drug thing. The life habits of so many hippies living in one place may have so totally soaked our atmosphere that the kids can’t help but become addicted to the Durango lifestyle and return time and time again. Whether for a quick weekend hiatus between medical tours of the grey-scale epidemic in Iceland, a more lengthy summer retreat from the terrors of Wall Street psycho-loons, or a permanent return to the town when you realize that you’re one-eighth Navajo and the Fort is free. Regardless of the time frame or the reason, the pilgrimage seems to be performed in higher numbers than other towns in America.

But alas, return as we might, there is no place for us in this town. Unless we are to be satisfied with parent-subsidized basement squatting or paying jacked rents for college-style living. The price of life here has slipped out of our reach faster than Priebus sneaks away when he sees Scaramucci with a microphone. So here’s my actual theory. We return, all of us homesick waifs in the wind, for the same reason Steven Seagal still thinks he’s an actor. We want to eke out the last bit of Durango-style living before the door is slammed in our face forever. So thank you to the granola-toting East Coasters. Kudos to the Texan winter homers. Props to those who have made it and can live here. We’ll return to say “hi” every so often, but y’all will be the true reason we will break free of Durango’s gyroscopic pull and never come back.