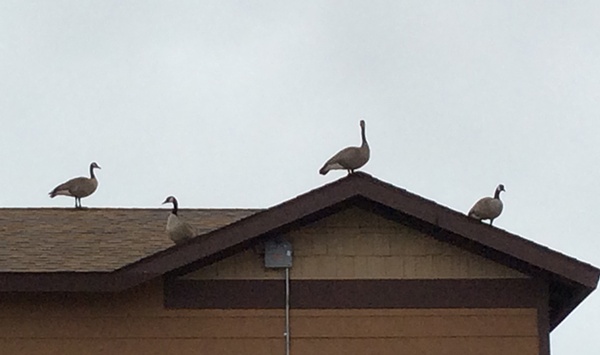 While my neighbors were absent, I kept an eye on their house to make sure things stayed safe. Not so much a neighborhood watch as a casual glance in their direction whenever I happened to walk past. I didn’t know if they had any kind of alarm system installed, but I stayed far enough away to make sure I didn’t find out.

One morning, I heard an unusual ruckus coming from next door. For such a quiet neighborhood, it immediately caught my attention. At first I thought the noise seemed human but then I recognized it: the honky-horn-blowing commotion Canada geese make when passing overhead. What troubled me was that the noise didn’t melt into thin air as one expects. The geese, it seemed, were circling overhead in a holding pattern instead of driving their wedge toward a distant horizon.

Stepping outside for a peek, I couldn’t believe what I saw. On the roof of my neighbor’s two-story house, pacing the shingles like sentries, four flat-footed geese stopped to stare at me while a dozen or more of their companions grazed the brown lawn below. The sight unnerved me, as if a squad of goose-stepping guards had taken over. I waved my arms and shouted, hoping to shoo them away. They stayed, stolid and alert, perhaps even reporting my behavior to their supervisors. I had been dismissed, so I returned to my house.

In our community, seeing geese is not unusual. They settle in our parks, poop on our sidewalks, and would, if they could handle a putter, play golf on the many acres of our irrigated fairways. Once a migratory species, many Canada geese have found urban and suburban areas provide a comfortable living without the bother of flying thousands of miles. Cant’ say I blame them – these days when I’m in the air, I’m lucky to be handed a tiny bag of pretzels.

Eventually, the “goostapo” moved off, but I still wondered about the ones that chose to spend their feeding time on my neighbors’ roof. Had living in our developed world skewed their natural instincts so badly they yearned to find new perches? Or is it porches? Divided from their natural instincts, it’s hard to say what motivates a goose to behave in a non-goose way.

Once while walking past the city park, I stopped to watch a group of about six people and two police officers pursue a goose back and forth across the lawn. For over 15 minutes, the goose evaded the trap: a man holding out an old blanket like a matador. His role required him to throw it like a net over the bird if the silly thing ever got near enough. I joined in the chase and later heard that the goose had repeatedly tried to bite children, which prompted a call to the police, which led to the all-out pursuit, which eventually resulted in its capture. It was as wild a goose chase as I’d ever seen.

A few domesticated geese have endeared themselves to their owners, but the birds aren’t typically known for being cuddly or affectionate. Goslings like all babies are adorable, but try to get near one even when the parents seem to be temporarily distracted, and you’ll experience a goose’s dark side. Males especially are noted for being aggressive. One documented example cites a goose killing another by persistently pecking its head into the mud, resulting in the victim’s death by suffocation. It’s no wonder I can’t help thinking of my neighbor’s roof geese as a viable product line for an organic home security system.

I still don’t have an answer for their unorthodox roof behavior, but I have settled on a pet theory. Because I walk past the house regularly, I’ve reflected on that singular event so obsessively that a reasonable explanation has finally emerged. The goose photos I took may have distracted me from noticing the one detail that inspired my “ah ha” moment.

The neighbors recently installed an array of solar panels along the southern exposure of their roof. While it proved to be a wise investment electrically and ecologically, it may have added a layer of complexity and confusion from a bird’s perspective. Gliding along with the wind under his wings, glancing down, attentive to every sparkle of water where a lush marsh or pond might provide a nice post-flight snack. The goose flying point feels responsible for the squadron trailing along. There! He sees a ripple of light. All the flap behind him convinces him it is time for a break. He trims his wing angle and prepares for the descent.

Science may not back me up on this. Ornithologists could be snickering up their sleeves, dismissing my observations as just another amateur bird-brained theory. We’ll never know for sure, because the evolution of geese has not yet bridged our interspecies communication gap. I felt stupid ordering those geese to get down. It was the down, after all, that helped get them up there.