“It’s not in the stars to hold our destiny but in ourselves.” – William Shakespeare

While shopping just after the holidays for discounted Christmas items, I overheard a conversation between a customer and a cashier. I should have moved along and minded my own business except the employee started gushing about her kids’ thoughtfulness. They’d bought her a star for Christmas.

In my mind I pictured an elegant ornament for the top of her tree, maybe illuminated by LED sparkles, or even a crafted piece of hand- blown glass. Something to replace a worn-out
angel. I could get excited about a well-done star.
Lingering near the gift card display, eavesdropping, I learned that the star was not any- thing as trivial as a holiday keepsake. The woman meant an actual star, one of those “billions and billions” of heavenly bodies that Carl Sagan raved about. This cashier’s star was apparently located somewhere along, or just below, Orion’s belt. 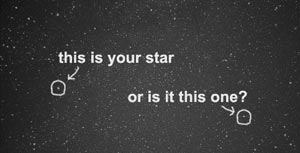 My first reaction: who in the world would pay good Earth-bound money for a piece of the
heavens that (so far) nobody owns? Apparently, the cashier’s children. My second reaction: those poor children must have been shamelessly scammed.

When I returned home I searched the internet and discovered at least one portal for stellar gift-giving. At Online Star Register (OSR) anyone with $33 can name a star for themselves or for a loved one. But for only $54 customers can opt for the “gift pack,” which includes free shipping! I’m not sure if that choice results in a chunk of space debris streaking across the sky, heading straight for your residential coordinates, or just the possibility that a little stardust might be slipped into your mailbox.

The Netherlands-based company has been selling stars “since the start of this millennium.” A sampling of previously registered names include Caterina, Matt Barrett, Chico and Deb. Sophias Grace is on the register too, without an apostrophe, but perhaps the grammatical error is for emphasis, a subtle suggestion that the namesake better not even think about taking possession.

Alright, enough speculation, because I’m fairly certain the vast majority of OSR’s customers are sincere in their desire to bestow a unique tribute for their loved ones.

Love itself is always difficult to express. That it exists and grows brighter with familiarity and vigilance is a characteristic of a star, and that it can fade and burn itself out long before we notice it’s gone, sadly, also typifies such celestial bodies. Any heart seeking to underscore its love shouldn’t be faulted for trying.

But I’m troubled by a 19th century mentality of manifest destiny that star marketing embraces. According to Wikipedia, historian Frederick Merk says this philosophy was born out of “a sense of mission to re- deem the Old World by high example ... generated by the potentialities of a new Earth for building a new heaven.” From my perspective, it’s one thing to stare up at the night sky and be inspired by its beauty, its depth and its seeming eternal nature. It’s another thing entirely to hawk the heavens in the name of love.

The online star registration site posts many happy reviews of its services, all of them one-liners, none of them with any- thing less than a five star rating. I’ve read many of them and uncovered no com- plaints about the quality of a star, its inaccessibility, or the misspelling of a customer’s name. Patrons seem to be pleased, holding this abstraction in their hearts while remaining tight-lipped about the specifics.

Like I said, I’m less inclined to see the business as a service to humankind, much less to the universe. What if, for example, I’m sold a dud, a star that went supernova 10,000 years ago and all I can see when I glance at my purchase is its last breathtaking pulse of light spewed across the galaxy? Can I return my star for a refund? What if I want to upgrade, add the nearest star to my registry with plans to buy up an entire gal-de-sac and plot a new constellation to bear my own moniker? Will OSR work with me on keeping the undesirables out of my celestial neighborhood, or will the kinds of questions I’m asking define me as a consumer advocating trouble? More than likely the latter.

Take heart. At least I’m not disparaging the marketing behind Holly- wood’s Walk of Fame, a stretch of terrazzo and brass stars dedicated to over 2,500 entertainers. This Chamber of Commerce’s marketing scheme attracts millions of visitors annually, tourists who are excited to stare at their feet while paying tribute to their favorite personalities. Fixed to nearly 2 miles of sidewalk, it is by far a more concrete approach to immortality.