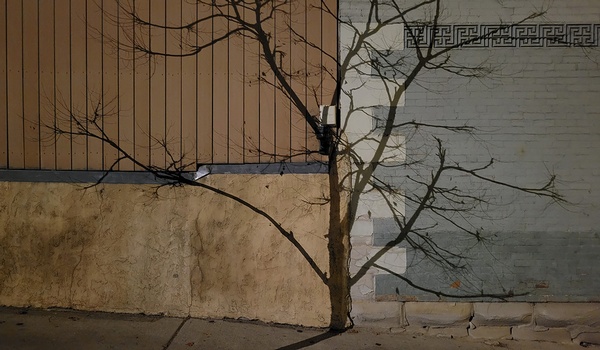 By the time we left City Hall, it was the color of 9 p.m. in September. Nearly three hours had passed, and for the majority of that time, the City Council meeting centered on the upcoming closure of Purple Cliffs for the unsheltered. When the courthouse clock tower rings, it’s counting down to the closure and uncertainty; it’s counting down to the displacement of humanity.

Throughout the night, I kept thinking of these words: “To throw people out of society is to create the conditions of society’s own demise.”

I always seek wisdom from artists and writers, especially in times of crisis. And that statement is from Chris Hannah, guitarist and vocalist for the punk band Propagandhi. On a podcast, Hannah was discussing bigger systemic issues, such as social inequality and dehumanizing the unsheltered. “That’s one of the real dangers of cities and communities, not meaningfully addressing social decay, outside of hiring cops to tear down homeless encampments or to arrest panhandlers. Cops don’t make any of this stuff go away.” Hannah went on to add, “We’re throwing people out of society, and what it’s doing is eroding civic trust and civic participation, and now it’s at runaway proportions.”

In that conversation, Hannah was mainly thinking of Winnipeg, his city. Yet, those comments also describe the crisis regarding the closure of Purple Cliffs. To do so without providing another encampment will further endanger and criminalize the unsheltered. Not only is this about providing a space for shelter and sleep, it’s also about recognizing the dignity and humanity of these individuals. As it stands, people in power remain indecisive on these matters.

While Hannah’s comments speak to a crisis that crosses the 49th parallel, the issue is more so exacerbated in the U.S. In an article from The Intercept titled “With sweeps of homeless encampments, liberal cities wage war on poorest residents,” Natasha Lennard documents the alarming trend of cities dismantling encampments with no alternatives for the homeless. From coast to coast, Lennard writes, “Many of the major cities carrying out sweeps are under Democratic leadership – a grim reminder that necropolitical population management is a bipartisan approach.”

And Durango is also complicit in such aggressive actions.

During the recent City Council meeting, city councilor Kim Baxter said, “It’s incumbent upon each of us to suggest solutions and not just complain about what’s happened in the past or what hasn’t been accomplished.” The latter half of her statement was baffling. The current emergency Durango finds itself in didn’t happen detached from history. Even in recent years, the city has been incrementally excluding the unsheltered. From outlawing sleeping outside to prohibiting “aggressive” panhandling and kneeling in the downtown area, the city has criminalized the movements of the unsheltered in their daily efforts to maintain dignity.

Such policies eventually received the attention of the American Civil Liberties Union. In a 2018 investigation, “A Year Without Sleep,” the ACLU concluded that, by targeting the homeless for sleeping, “Durango police are actively pushing unhoused people out of city limits.”

It’s also worth noting that earlier this year, the city approved $170,000 worth of funding for homeless support. It’s a sizeable increase from 2021, but it came close to rejection. According to The Durango Herald, “The approval almost did not pass, because Baxter was hesitant to commit the $170,000 because of a paragraph that said $170,000 would be pursued in 2023-24 as well.” Baxter ultimately supported the funds, because “approvals in 2023-24 are still open to further discussion.”

Two hours into the meeting, the city and police department gave a presentation. It didn’t offer much of an update on the Purple Cliffs predicament. And when Deputy Police Chief Brice Current presented slides clarifying the policing of the homeless, all I heard was “copspeak.” In their book “Police: A Field Guide,” sociologists David Correia and Tyler Wall define it as “a language that limits our ability to understand police as anything other than essential, anything other than the guarantor of civilization.” In other words, copspeak is the rhetoric used by police to justify and increase their power.

During the presentation, the police spokesman repeatedly insisted on “enforcing behavior, not status.” Yet nearly every bullet point revealed the opposite. The public was reminded of the prohibition on “aggressive panhandling” as well as camping in one’s vehicle. But for someone with a vulnerable status (or one without status, such as the unhoused), certain actions and behaviors are unavoidable, such as sleeping outside or panhandling as a means of survival.

According to the Police Scorecard, a nonprofit group evaluating policing around the country, Durango Police have a score of 35%. For comparison, cities with higher scores “spend less on policing, use less force, are more likely to hold officers accountable and make fewer arrests for low-level offenses.” It should be noted that for Durango, the data they are drawing from is incomplete. Colorado is one of 36 states with laws in place that make police records inaccessible.

Given the low score and the ACLU investigation, one can make the case for defunding the police and reallocating that money toward social programs for those in need. And given the severity of the unsheltered situation, more public pressure must be placed on the city to continue funding for homeless services.

“To be rooted,” Christian socialist Simone Weil wrote, “is perhaps the most important and least recognized need of the human soul.” Durango has a shameful legacy of failing to recognize this need for certain communities. Historically, Black, Brown and working class communities have often been neglected, leading to their displacement. The city has a long way to go in order to reconcile with its past. But by compassionately addressing the growing need for affordable housing, by undoing the threat of displacement, it can begin taking steps toward redemption.