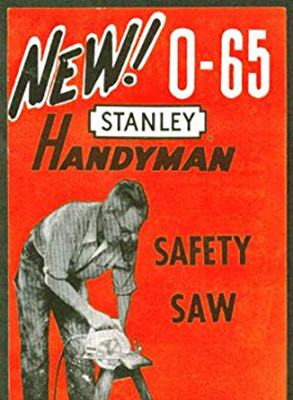 Allow me to start by saying that I am not afraid to get my hands dirty. I made mud pies once, same as any other kid. I took money – money that our family dog had eaten and fully digested before my mom washed it and put it in plastic baggies so I didn’t have to touch it – to the bank once, same as any other kid. I have even gone so far as to live with other males in a college dormitory.

Getting my hands literally dirty makes me feel manly and accomplished. Fearless and grounded. But getting my hands figuratively dirty? Let’s just point out that I was an English major for a reason, and that reason is power tools.

I never bothered to learn to operate power tools as a young adult. I saw no reason. I could fix any household problem by reading a book and traveling into other worlds and other lives until the problem resolved itself and/or we moved away. Ever since, that method has been my most reliable approach to both home maintenance and personal relationships.

But no more! I have decided that enough is enough, and I must learn things like how to replace a faucet with nothing more than my hands, my wits, a cordless 18-volt reticulating saw with LED light and lithium-ion battery pack, and a growing awareness of how expensive a house call from a plumber can get.

In case you have never replaced a faucet with nothing more than your hands, your wits and a cordless 18-volt reticulating saw with LED light and lithium-ion battery pack, but you are considering doing so, then I also recommend wearing rubber gloves. These are especially necessary if the hair in the drain does not, and did not at any point in memory, belong to you. I have broken leases over lesser issues than drain hair. Stephen King wrote It, in fact, because hair clogs were too scary. This is more than getting your hands dirty; this is suffering contact with a visceral substance with the power to lock you in an eternal time loop where you never untangle yourself from the hair under your sink.

But untangle myself I did, and so emboldened was I from my triumph that I decided I could build my own house – one without drains at all, probably! Or at least I could retile the bathroom. But before taking such major steps, I deserved a break.

So I taught my dog how to swim.

We are all new to something at some time. Sure, I had to learn the difference between a blade for wood and a blade for metal for my cordless 18-volt reticulating saw with lithium-ion battery pack. But I loved that saw from the moment the man at the hardware store explained why I needed it for any and all of my home improvement projects. Hawkeye too loved the water from the first time he set paw in it. I could not judge him for his process of learning to swim, no matter how much he swam like he was competing in a fifth-grade prep school slap fight, and no matter how shockingly he resembled an oversized, underfed rat when he emerged from the deeps. Because he was happy, and hanging at the lake sure beat caulking the bathtub.

We returned to the lake again, and again, and Hawkeye’s best friend (non-human division) taught him how to swim with a bit more grace, and all was well with the world, and then Hawkeye ran into a driftwood tree stump.

My best friend (non-dog division) said – and I quote, omitting the words not permitted in AP style – “Oh.” Hawkeye’s back leg was not dangling loose like a half-eaten carnival turkey drumstick, which is what I imagined upon contact. But he did have a four-inch piece of driftwood tree stump in his side.

I, being unafraid to get my hands dirty, left the wooden stake in place to search for other injuries. My friend said, “Hold his mouth,” which I did, being now completely certain my dog was not a vampire. She yanked the mega-splinter from his side. I said – and I quote, omitting still more nonpermitted words – “Holy.”

Somehow, Hawkeye did not bleed out everywhere. This was helpful, because I am an English major for one other reason, and that reason is blood. Nor did he use it as an excuse to go get ice cream. Instead, he soldiered through while wearing a protective t-shirt.

The lake was forbidden for several weeks, so I returned to housework, and whilst I was shoveling gravel, Hawkeye tore out his own stitches.

Fortunately, he healed well, so he simply spared himself a return visit to the vet. I suppose we both have more of a do-it-yourself vibe than I ever suspected. But it’s good to be prepared, and if Hawkeye had injured himself further, I was ready. I always have a stack of good books waiting here, right next to the saw. Just in case.