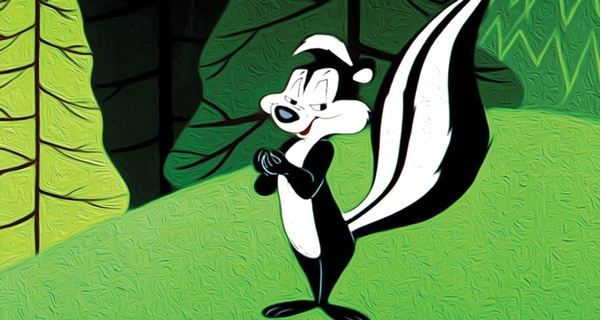 I’d closed up the house and gone to bed, blithely unaware that our property was being cased. You’d think one of us would have heard an unusual noise during the night but usually we’re deep sleepers, especially when the summer’s hot and a cool breeze finally works its way through an open window. I assume the culprit wore black, like most of them do, and I also suspect it made little difference whether we were or were not home, because we slept right through it.

The next morning it was obvious we’d been hit. The house reeked, an odor no one mistakes for fresh brewing coffee or the aroma of bacon sizzling on a griddle. With my head under the pillow, I sang a muffled version of Lauden Wainwright’s golden oldie, “Dead skunk in the middle of the road, stinking to high heaven.”

Then I jumped out of bed, quickly opening every window and door, knowing from previous experience that it would probably get worse before it got better. It got worse. The odor permeating the yard took over the whole house, as if the white stripe of morning had landed squarely on the back of the night and we were hanging out under its great belly.

I can officially report there’s little reliable information about dealing with a skunk’s natural defense, especially if you rely on your neighbors. What I heard recounted as “sure-fire” methods sounded worth trying, though you have to remember I was desperate. For example, a lady informed me if you wash a dog with tomato juice (adding just a dash of Worcester sauce) it will entirely eliminate a skunk’s odor. Unfortunately, we didn’t own a dog, and it would be silly to wash the entire house in tomato juice. I did the next best thing. I thanked her for the advice and went back to my stinky house. Then I poured two glasses of tomato juice, added some vodka, and hoped the remedy would at least stop the stench from rotting our insides.

Sipping my cocktail and walking to survey the outside of my house, I could tell with just my nose, that the strongest odor came from the vicinity of the front porch. I hooked up the garden hose and did my own spraying, figuring the best remedy might well be to wash it down with the hair of the skunk that hit you.

Unfortunately, the odor wouldn’t go away. When I finally went inside and closed the house, it smelled as if the skunk had been trapped inside. When I opened all the doors and windows, the odor strained through the screens like a sour breeze from a landfill.

It could be that the skunk had taken up residence, perhaps underneath our abode, in a crawl space I still have nightmares about inspecting.

By far the most popular solution offered when I asked the question “How do you get rid of a skunk?” was to shoot it. But you can’t shoot what you can’t see, and even if I owned a military-issued pair of infrared goggles and odor seeking bullets, I’m a reluctant killer. All I could do was drive to a local farm and ranch supply store where an employee offered to sell me a live trap, but their return policy wasn’t too keen on taking the trap back once it got filled.

The next day I flittered around the house in a purposeless manner like a moth trapped in my grandmother’s attic. I couldn’t decide which was worse, the skunk or the mothballs. Finally, I couldn’t stand it any longer and I wiggled into the crawl space with surgical gloves, a mask, and a flashlight to gather the mothballs and place them in a plastic bag – a kind of toxic Easter egg hunt, with an elusive skunk for a bunny.

Now I live in the same house with only a subtle odor of skunkballs that occasionally resurfaces and mingles with the scent of a full-time plug-in air freshener, a living example of fusion at its worst. Naturally, when I can’t stand the compromise any longer, I sleep in the camping trailer parked in the driveway. The air is getting better, really, and if you have any other suggestions, please keep them to yourself.